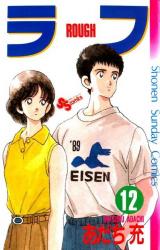 Easy to Pick Up
by Eyenheart
February 20th, 2018, 11:24pm
Rating: N/A
Interesting and enthralling with a fresh and homey art style that draws you in every time. The story is easy to follow even if you take a break from it. This manga has a really nostalgic feeling.
Was this comment useful?  Yes

Simply brilliant
by budlaygid
March 9th, 2017, 4:21am
Rating: N/A
You can't go wrong with an 80s manga! The art was drawn beautifully.This is why I always like them old mangas because the characters are written properly with that hint of drama.

But damn that ending had me hanging!
Was this comment useful?  Yes

I think this might be my favourite
by enaikelt
June 25th, 2013, 6:34pm
Rating: 9.0  / 10.0
I've never really liked Adachi before, because you know, there was baseball... and then there was this other thing... and then there was the open blue sky, and then it would end, but not after having dragged on for fifty chapters too long. Swimming, on the other hand, is way more straightforward than baseball, so I liked it a million times more.
Was this comment useful?  Yes

an ending most Adachi
by myyinfatuation
April 18th, 2013, 1:58pm
Rating: 9.0  / 10.0
I remember this ending being frustrating but not the specifics so i reread the entire thing. It was worth it but yeah that ending... >:-[ Its not a bad ending just open ended. It kinda leaves the feeling that emphasis on the story was put more on romantic slice of life than a sports one. I know Adachi uses sports as a way of character development and slice of life material but with the way it ended it really emphasized how swimming was used as a plot device rather than the focal point. (I swear if this were a baseball manga he would never have ended the way he did)

I personally like rough because I like the main heroine. Didn't enjoy H2 as much because I wasn't that big of a fan of either of the two girls (that I can remember.)
I remember reading a comment somewhere that said hiatari ryouko was a precursor to Rough but i don't see it. Sure every Adachi manga has plenty of similarities, but the actual plot line is unique.

My only complaint with this manga was that the characters didn't feel as fleshed out. Like how/why did they pick up swimming/diving etc...

Great manga overall but my favourites will always be Cross Game (Aoba!!!) and Touch (in that order

OK Read this comment
by saxenas1
May 26th, 2012, 4:59pm
Rating: 8.0  / 10.0
So, I have read H2, Touch, Rough, Cross Game and one more....to be honest, these are what they have in common: Names, Characters, baseball and dating. A bunch of other stuff like depth of relationships and people dying or who died etc......But seriously, Adachi Sensei doesn't have guts. Everything ends like it should, like an everyday cliche. I am not saying hes a bad author, its just that his works are too similar.....maybe I guess thats why some people read it, but I was hoping he would show something more.....like once in a while where the dude doesnt get girl of his dreams ......and doesnt get his dreams either but the story still ends with a 10/10 perfection. I maybe asking for too much, but I feel if anyone can do it, it has to be Adachi Sensei.

Ohh the ending..
by Verix
March 16th, 2012, 2:32pm
Rating: N/A
I liked it as a non baseball Adachi manga, the atmosphere and relationships are recognizable and solid as expected. The ending is a bit silly though, everyone knows what would happen, why won't they draw out the happy ending we want to see. It's a but of a disgrace to end such a build up like that.
Spoiler (mouse over to view)
"If my Keisuke marries your Ami".. why keep it at the "if" GOD DAMN IT /end rant

Great manga, yet still
by fudg
September 26th, 2011, 8:08pm
Rating: N/A
I really love the mangas that Adachi makes, they are usaly pretty slow phased but not in a boring way and there are no major plot twists that alot of mangas usaly have but it's still interesting all the way.

The one thing I both love and hate are his endings, the endings on his mangas are always kinda open ended yet still determinate. The endings are always beutiful and you get what will happen from now on but they always leaves me feeling a little bit empty.

Such a pleasure to read
by Adj
July 25th, 2011, 6:28pm
Rating: N/A
Once again I am struck by how accomplished Adachi is. His art is old fashioned, but powerful and clear. Because he doesn't write action, there's no need for speed/explosions/etc., and the combination of expressive characters and carefully drawn backgrounds adds greatly to the feeling that we are watching 'real' people.

This sense of reality, for me, comes through most clearly in the dialogue - ironic humour, as unsure but powerful high school romance unfolds. The individual characters come through really well in this manga, leaving a sense of an author who has watched people closely and has the skills to bring his understanding to the page.

I used to think that Crossgame was my favourite of his manga, but now I am not sure if that's still true.
Was this comment useful?  Yes

I'm glad i went back
by czartchiee
May 7th, 2011, 10:23am
Rating: 10.0  / 10.0
I had once started this, thinking "Oh the art is old fashioned. It's a Shounen" but I was surprised at how good this was! I read it all in one sitting. 9 am - 12 pm
I loved the ambience of the manga. The hero and heroine were really cool. Keisuke was my favorite character. He's never serious but when he is, the results are amazing. I agree that the ending was vague and left you with a feeling of displaced disappointment. But it was the ending that fit this manga.
Was this comment useful?  Yes

Mitsuru Adachi
by jackblack901
May 6th, 2009, 10:47am
Rating: N/A
In the view of a MA fan, Rough is always is best or second manga. Especially, if you don't like baseball, this is probably the best so far. It contains all of his style in a short story.
About the ending: As a happy romance story ppl should expect that the couple will confess, kiss, going out or marry at the end of the story but an opening ending somehow make story have its own interest and as good open ending it's really good one.
Was this comment useful?  Yes