Login to add items to your list, keep track of your progress, and rate series!
Description
Picking up directly after the events of 20th Century Boys, it seems like the world is finally out of danger, but the mystery of "Friend" still exists. As the world is threatened again, Kenji must search his memories for any clue about "Friend." 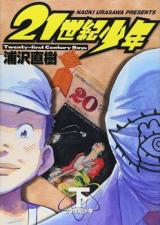 Note: You must be logged in to update information on this page.
Forum Posts Click to view the forum
21st Century Boys Gets New Ending in Manga's Complete Edition
over 5 years ago
it's finally over
over 14 years ago
nearing the end *spoilers*
over 14 years ago

DISAPPOINTMENT
by siddharth
December 4th, 2015, 4:55am
Rating: N/A
Even 20th century boys was going downhill in the end and what little hope i had from 21st century boys was ruined after i read it. 20th century boys used to be so exciting and amazing in the beginning but ending was not satisfactory for me. Even the revelation of friend #2 identity didnt create any excitement. (I actually had to recheck who the hell is this guy when name of friend #2 was revealed) . There are so many questions left unanswered that there could have been a couple of volumes more to explain it . Well what can we done about it except accepting this disappointing ending.
Was this comment useful?  Yes

An unsatisfying conclusion.
by Neofit
April 25th, 2014, 5:35am
Rating: 6.0  / 10.0
It's quite a hollow feeling that you get after reading the conclusion to 20th Century Boys. This is not a real ending, most of it does not even happen in the reality of the story and could have taken the place of the many filler chapters of the main series. The author may have hinted that he cannot really figure out an ending within the manga itself, through its manga artists minor characters, but it's really disappointing that we don't get to actually know what happens to the characters after it's all said and done. Simply put, it's almost completely lacking catharsis.
Was this comment useful?  Yes

Kind of a Let Down
by bull3thole
May 6th, 2012, 10:04am
Rating: 8.0  / 10.0
I felt like many of the other people below me. You kind of feel cheated that the author tries to solve all the potholes in the manga. The plot was going all over the place and it felt like the author was tries to end it quickly within a few volumes. Even though it was not good as 20th Century Boys, it still ended on a better note then most mangas' but I hated that
Spoiler (mouse over to view)
Kenji at the end never reunites with his sister. I really wanted him to meet her again after SO many years.

Overall its a great manga but not as great as his other work called "Monster".
Was this comment useful?  Yes

A MUST READ for the entire 20th Century Boys series!
by pandapple7
August 17th, 2011, 8:09am
Rating: 10.0  / 10.0
this is last two volumes of the 20th Century Boys series but just under a new name, the 21st Century Boys. this fills in and answers some questions you may have had and gives a satisfying ending to this wonderful series! DO NOT MISS OUT ON READING THIS!! loved this whole story and will definitely read this series again and again!!

Satisfying End
by Kagekyuubi
June 18th, 2009, 12:38am
Rating: N/A
Two of the things that annoyed me about 20th century boys was how convuluted the thing was by the end of the story and that Kenji coming back but not really doing anything in the third part of the story. By the time the story ended it didn't feel like the ending was complete and had to be cut short. It really would have helped if they had just ended the story with the 2nd arc only with a different ending since that was what I thought the best part of the story.

In 21st Century Boys, it solved all those annoyances for me cleaning up the plotlines except for Kana's power which didn't really seem to be much of a mystery but more like just part of her character. Kenji was finally doing things that a main character should be doing and stopped being this senile reluctant saviour that he was in the third part. That's why seeing what Kenji did to solve the problems caused by the things he did as a child left me feeling satisfied at the ending. To me, this was the goodbye that the first series never gave.
Was this comment useful?  Yes

OK
by lozanogo
June 11th, 2009, 11:59pm
Rating: 6.5  / 10.0
Well, this is the continuation of 20th century boys, a couple of volumes. I a few words, another plot was added on top of the previous and final plot, it seemed Urasawa was testing if people would fall again in the hype of reading the endless story of new 'final plots' and new 'friends'. I was glad this was short but seriously, Urasawa should've ended 20th century boys with a couple of extra chapters.
Was this comment useful?  Yes

21st Century Boys
by luzzz
October 16th, 2008, 4:35pm
Rating: 8.0  / 10.0
I felt kind of cheated after I finished reading this. It just served to tie up some loose ends left unresolved after 20th Century Boys finished, yet the two volumes failed to answer some of the bigger mysteries. On the other hand, I would still recommend these two volumes because the storytelling and art are top-notch.

First, let me say what it does do well. It is pretty faithful to the original in style. Infact, its pretty much just a continuation of 20th Century boys. It doesn't try to deviate from the formula, but thats not a bad thing. It also does add a relatively satisfying ending and it closes off a lot of the mysteries.

But, it doesn't really live up to the climactic conclusion that I would have liked from 20th century boys. Really, I think the ending to 20th century boys was full of more emotion than the ending to 21st century boys. This was more of a "filling in the holes left by the real ending". Also, the 2 volumes seem to spend too much time doing where are they now and trying to make the reader realize that all the characters are still there. I mean, theres only 2 volumes, yet every still living character that was given a name and introduced in the entire series was given some panel time, and some of it just disrupted the flow. I'm tempted to say even all of the dead characters made an appearance.

Lastly, the series seemed to spend too much reliance on psychic powers. It makes it feel a bit contrived and forced, and is quite a deviation from the original series. I'm not saying that 20th Century Boys ever tried to be realistic, but although it bent them a little bit, it tried to stay within the same laws as the real world. And the lack of psychic powers is part of the suspense. Because it gave the idea of "How did he do it?" or "How did he know it?". But when you throw psychic in, it just kinda throws logic out the window.

But overall it wasn't a bad read. And is definitely worth reading. If only to fill in the holes. I just feel it could have done a lot more.
Was this comment useful?  Yes

Satisfying Cap to 20cb
by tokkun
February 28th, 2008, 7:13pm
Rating: 8.5  / 10.0
While 20th Century Boys seemed to stumble a bit near the end, 21st Century Boys seems to recover with some grace. While it doesn't really reach the heights of the first series, it does manage to pull off a satisfying ending to the long and convoluted tale.
Was this comment useful?  Yes