Login to add items to your list, keep track of your progress, and rate series!
Description
Humanity, having faced extinction at the end of the 20th century, would not have entered the new millennium if it weren't for them. In 1969, during their youth, they created a symbol. In 1997, as the coming disaster slowly starts to unfold, that symbol returns. This is the story of a group of boys who try to save the world.

Note: Won the Kodansha Manga Award in the category "Best General Manga" in 2001. Won the Seiun Award for Best Comic in 2008. Won Best U.S. Edition of International Material at the Eisner Awards in 2011 and 2013. 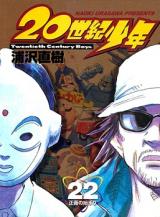 Note: You must be logged in to update information on this page.
Forum Posts Click to view the forum
20th Century boys questions (spoiler)
over 8 years ago
"20th Century Boys" Live Action
over 12 years ago

So-so
by jomellyfish
February 10th, 2021, 10:41pm
Rating: 5.0  / 10.0
I don't know, but I completely agree with wait 321. I picked this up hoping that the manga lived up to its reputation and could stand on the same level with Urusawa's Monster, which was more to my taste. But boy did it give me disillusion and the impression that Monster is sacrosanct. Everything felt contrived just to prolong the story. There was too much flashback, plot twists, and characters that has actually little to no significance to the story, or better yet characters with flat background and identity. It's a masterpice maybe, but probably not for everyone and especially not for me because 20th Century Boys' non-linear plot stressed the fuck out of me. I especially hate how Urusawa incorporated pop in this manga which got me confused as to what he actually wants to show us. Overall, this manga was a decent read and I'd recommend it to conspiracy and mystery buffs just for the first part of the story which managed to grip my attention.

is it a classic? i think so. (nothing much else to add)
by the_Cloudborne
April 26th, 2019, 8:55pm
Rating: 9.0  / 10.0
i wouldn't tier it among my favorite manga and maybe it's not quite old enough but it just ~f e e l s~ like a classic, like it's something that will endure.
other reviewers have felt that it dragged on too long but i respectfully disagree. my personal gripe would be that a lot of the characters felt a bit...flat. maybe it was due to the nature of the story/plot (timeskips) but it felt like much of the character growth/development was offscreen (unseen),
Spoiler (mouse over to view)
yoshitsune
being a great exception.

Great start, drags on later
by NazarethSTG
April 20th, 2016, 4:34am
Rating: 6.0  / 10.0
This series starts brilliantly, with a great premise, great characters and an engaging story. Sadly, what the author starts unveiling is not as interesting as the mistery that precedes it. It starts to drag on and to keep the reader's interest Urasawa starts to machinegun his trademark forced, ridiculous plot twists, a cheap way to tell a story. Maybe the story was too ambitious for Urasawa to handle, or maybe it's just that he's better at building mistery than explaining those mysteries, something that seems to be common in his work.

Good
by kiriee
November 11th, 2015, 9:34am
Rating: 9.0  / 10.0
For the first half, Everything laid out perfectly but the last half not so great with so many new character being introduced and how the author trying to make it like they are supposed to be there or maybe a twist to me it was just after thought to make the series last longer than it should.

A lot of manga suffer a from this kind of thing, I guess this is kind of thing that you have to deal with popular manga, kinda a shame to see perfectly great manga turn into an good manga near the end. Well still worth reading.

Must-read
by Dr. Love
May 21st, 2014, 6:46pm
Rating: N/A
A classic. Anyone who reads manga knows this manga. And even people who don't read manga know what 20th Century boys is! As usual Urakawa develops a world with loads of interesting and diverse characters yet manages to tie all their plot lines up neatly.

Personally I thought 21st Century Boys was unnecessary (or should've been added to 20th Century Boys).
Was this comment useful?  Yes

A good read, but it drags on and loses momentum.
by Neofit
April 25th, 2014, 5:25am
Rating: 7.0  / 10.0
A great series, to be sure, but it wastes a lot of time on trivial things that do not add anything relevant to the main story. The second half is thus not as good as the first - too many characters are being introduced almost regularly and then quickly set aside, old characters fade into the background, plot elements that looked as if they would play a major part in the story later on are mostly forgotten or set aside as if the author just decided to drop it, and the whole story gets quite silly and loses the original detective thriller/mystery feel; a lot of implausible things get hand-waved just to set up a particular setting for the last part, which ultimately drags on the most without being particularly satisfying and does not even wrap up in the main series.
Ultimately, it is a very good read, it manages to entice and deliver on its suspense (most of the time), and I would gladly recommend it to anyone interested in conspiracy thrillers, but the second half is not quite as satisfying and interesting as the first.
Was this comment useful?  Yes