Login to add items to your list, keep track of your progress, and rate series!
Description
This is a collection of seven oneshot stories.

1) A Million Pound Love (100万ポンドの愛)
A 80 year-old lady asks a 20 year-old playboy to marry her as a last wish, in exchange for one million pounds.

2) A Fairytale Judas (お伽話のユダ)
The Nobles can fly, are as white as snow, maybe whiter and even brighter.

4) Metal and the Bride (メタルと花嫁)
Jack is a talented man, or is he?

Latest Release(s)
c.1-4 by SakkaOnna over 14 years ago
Search for all releases of this series 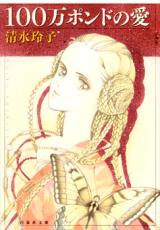 incredible
by whitespade
January 23rd, 2012, 12:40pm
Rating: 9.4  / 10.0
i must say i am one of those person that look down on shoujo thinking them inferior with all that crap about love and romance, flowers and sparkles everywhere. but this manga officially turn me to a shoujo fan. this is profound, beautiful, romantic, and timeless stories that even in the constantly changing world, its message still rang through to the readers. the title story is the best, but all of them deserve the time they spend on. hurry and read them!

edit:
somebody move the comment from 'thismomentisfate' because it is from the manga 'yume no tsuzuki.'

A Million-Pound Love
by akari_mizunashi
January 28th, 2010, 8:26pm
Rating: 10.0  / 10.0
There's a lot of manga in the world, and with as much respect that is due, most of it isn't worth reading. Still, it's worth slogging through that 90% to find creators with real talent and depth, creators like Shimizu Reiko.

This collection is Shimizu at her best. The stories all manage to make the reader think while retaining a pleasant shoujo atmosphere. Shimizu's storytelling style is clearly heavily influenced by Hagio Moto, the reigning goddess of shoujo manga, and she occasionally alludes to that venerable creator, but her stories are all still original enough to give her a signature flavor (with the sad exception of the otherwise brilliant Metal and the Bride, which pulls shamelessly from Blade Runner). This Shimizu tasting course is a must-read for any fan of the shoujo genre.

so stupid...
by thismomentisfate
December 19th, 2008, 7:45am
Rating: 1.0  / 10.0
Spoiler (highlight to view)
the main girl was so annoying and weepy. i understand her loneliness, but she was willing to let the guy die rather than let him leave and be happy, her obsession was a bit much, she was so annoying. like an idiot she even decides to give up all her worldly possessions to this guy that only wanted to escape from her, is she stupid? maybe she is insane. she has this sweet loyal guy next to her and yet she is too blind to see that. to me this is just like other shoujo manga, a stupid weepy main girl obsessed with a guy for his appearance or fame, nothing different.

Amazing
by luzzz
September 16th, 2008, 6:04pm
Rating: 10.0  / 10.0
This one-shot was absolutely amazing and beautifully written. The relationship that develops between the man and the woman is wonderfully characterised.
Was this comment useful?  Yes

A Million-Pound Love
by yumemiru
August 15th, 2008, 6:23pm
Rating: N/A
Oh, this was a lovely oneshot!
It's definitely a break from all the supeficial shoujo oneshots that are totally vapid and silly, and it's different from the slice-of-life stuff as well.
It's sweet, but also makes you think a little, even if everything is masked up by the simple plot.
I loved the story, and I think I'm going to continue reading this manga-ka's other works.
Was this comment useful?  Yes