Login to add items to your list, keep track of your progress, and rate series!
Description
Ao Sakabara is a rising young actor who loves his fans. He credits his success to them. So he is thrilled when he gets a huge role in a drama written by his favorite screen writer! To top it off one of his co-actors is the biggest star of his agency. Life is good until an unexpected part of his past shows up to ruin everything. 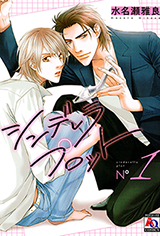 It's okay I guess
by OmNom
September 15th, 2019, 7:47am
Rating: N/A
There's nothing of much substance in this manga at all, neither the plot, nor characters, nor writing - they're all pretty average in terms of quality, but at the end of the day it's an okay read to pass time with so I wouldn't disregard it entirely. I've always had this problem with Minase Masara anyway (none of her works that I've come across had ever truly impressed me - her style is just too shallow for my taste), so the fact that I got a bit of entertainment out of something she wrote this time is already a big achievement haha.
Was this comment useful?  Yes

Gets better after each re-read
by Ferno888
December 6th, 2015, 8:36pm
Rating: 10.0  / 10.0
I went into this neutral but found it to be surprisingly good! Ao is a bright and young actor who wants to make it big as a serious actor but has his dream crushed by the screenwriter (Kou Higashihara) of the drama series he is yet to film. The screenwriter tells him upfront that he is no good as an actor and adds insult to injury when he reveals that Ao confessed to him while they were in high school. A painful memory for Ao who was rejected by the arrogant Kou back when he was a teenager in love. What follows is a great story of two young people in the entertainment business trying to successful and trying to keep their emotions in check when it comes to the both of them.
Was this comment useful?  Yes

I actually loved the first chapter!
by Gattaca88
August 9th, 2011, 2:46pm
Rating: 10.0  / 10.0
I for one love the hate/love relationship she does and this one is done right. I don't want to spoil anything for anyone but trust me when I say this one looks promising. I love Minase Masara and her lovely yaoi mangas, they make me happy and this one sure did

She does finish what she started, it's just that it does not get translated in english as fast as she starts new projects. Hey, she loves yaoi and chooses to do many, good for her

Same old, same old...
by Amitielle
July 22nd, 2011, 2:21am
Rating: 7.0  / 10.0
Ok, another Minase Masara project and it already started with the...same setting, same old plot, same boring characters...same old love/hate story. It's a shame it could have been great, but after reading the first chapter my hope just died. And I don't understand a thing: she starts new projects when she didn't finish others. It's as if she got bored drawing the others and comes with a new plan...but the plan fails because it's just the same as the old ones.
Of course, the drawing is beautiful, yet, again, too simple. She just needs to add some details and some shades. Really, it hurts my eyes...
I hope this will go on in another direction and become interesting. But seeing how it started...
Was this comment useful?  Yes