Login to add items to your list, keep track of your progress, and rate series!
Description
From September Scanlations:

With a father who's a singer, a mother who's a movie star, and an older brother, Shougo, who's the lead vocalist for the super-popular band The Crusherz, Sena Izumi, an otaku college student is the only dull one born into this super famous and talented family. He loves Magical Girl LalaLulu and is working hard to become a mangaka, but one day he winds up appearing in a TV commercial he just can't turn down. There, he's reunited with Ichijou Ryouma, the super-popular young actor he costarred with on a project ten years prior. 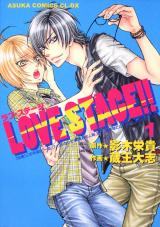 Note: You must be logged in to update information on this page.
Forum Posts Click to view the forum
Love Stage!! Anime Announced
over 8 years ago
Question about Love Stage manga
over 9 years ago

Adorable and silly
by mikeytookawaii
September 22nd, 2020, 12:50pm
Rating: 6.0  / 10.0
This is one of those guilty pleasure manga. The art is gorgeous and the characters are adorable. The plot is extremely silly to the point of being ridiculous.

Its worth experiencing if you really enjoy yaoi drawn to be very pretty. I've finished the anime as well and I remember enjoying the manga much more. I didnt like the English voice casting for Izumi.
Was this comment useful?  Yes

Goes downhill fast
by mensolzero
March 29th, 2018, 11:06am
Rating: 3.0  / 10.0
This manga started out cute enough. A silly premise that makes next to no sense, but because of the art and how cute it started I kept going through it. However, you can only overlook so many inconsistencies and bad, bad story arcs before it ruins any promise it might have had. They put the characters though some dark, nonconsensual stuff and play it off like it was not a big deal.
Spoiler (mouse over to view)
At the end Izumi basically gets abducted and nearly raped and they just laugh it off like it's just another little prank they have to deal with.

Im grateful it wasn't my first yaoi
by nausicaa70
February 26th, 2017, 3:31am
Rating: 3.0  / 10.0
No honestly I would have been turned off for real xD
Drawings were good but the story was soooo lame...
I liked none of the characters. It was so cheesy, so cliché.. wtf ? *facepalm*
I wondered if I wasn't actually reading a shitty shoujo ^^'
Please people you should read more yaoi and you'll understand why this one is bad.
Was this comment useful?  Yes

Typical
by Anilied
February 3rd, 2016, 6:02am
Rating: 3.0  / 10.0
Nothing special in it. Especially the cross-dressing thing made me almost throw up. This "popular" manga/anime has all the cliches I hate. That usual "Cutie-pie" uke and the normal seme (I don't really know how to describe it... The seme just can't restrain himself from wanting the uke). The only cliche that I didn't find in this manga (even after being so cliche-ful itself) was that it doesn't have any "rape"! The first time of mine finding a manga with no rape!
I'm not hating. The art is very cute and fluffy. Would totally recommend to anyone who is finding something cute to read.
I also agree with lifeincircuit and hervor . As said, nothing unique in this manga. Just your average seme-running-after-cute-girly-uke thingy. I've read enough mangas to know those usual contents. Totally not for me.

Read it
by Avelys
July 15th, 2015, 2:19am
Rating: 7.0  / 10.0
It's basically a mixing pot of shoujo cliches with a generous dollop of Yaoi added in. I think its quite cute, and very funny. However, cliches are prevalent throughout, and not all of the characters are like able.

The seme, though he is rude toward the uke at first, soon adopts a refreshingly respectful attitude that is maintained throughout. The uke is weird and his motives are sometimes hard to understand, but he's a funny character.

It's not a super great manga, basically a fluffy, soft, yaoi version of skip beat.
Was this comment useful?  Yes

nope nope
by hervor
August 21st, 2014, 10:08am
Rating: 1.0  / 10.0
I like this mangaka but I dont like this manga because its feels like there is no real emotions in there. I think that it s based on how the characters are not "character" but just uke and seme, they are not unique at all this kind of mainstream characters are just soo predictable that kills all the story and pleasure of reading. You do know how they are going to kiss, how going to respond the situations etc. Yeah it can be good yaoi but not for me.
Was this comment useful?  Yes

Cute shoujo
by cherrykookie
April 22nd, 2014, 3:10am
Rating: N/A
I just read one volume, so my review is just based on that.
This manga is VERY shoujo-y, it's basically the exact format of a fluffy shoujo romance, the uke even looks like a girl too/cross dresses. That said, it's pretty cheesy/forced, yet it still had me smiling and laughing throughout the entire volume. This is a nice light read for a comedy, but I wouldn't expect anything serious in the romance/yaoi department, other than what you normally get from generic shoujo mangas. I don't mind reading this to kill time, but personally i prefer for angsty/serious yaois.
Was this comment useful?  Yes

LOVE IT! LOVE IT! LOVE IT!
by smallpancakes98
January 5th, 2014, 10:12pm
Rating: N/A
i freaking love this manga. the drawings are perfect, the sex scenes are awesome (teehee) and that its yaoi.
but as the director guy pointed out in chapter 20, ryouma doesn't trust izumi. its nice that he gets worried and all but sometimes you gotta let go and trust sometimes but i can understand why he feels that way because of the sexual harassments but ryouma should know izumi and what kind of person he is.
Was this comment useful?  Yes

AMAZING YAOI.
by fufufuyen
April 21st, 2013, 12:40am
Rating: 10.0  / 10.0
I was always kind of borderline with yaoi, mostly into one-shot NaruSasu stuff, BUT THIS MANGA TAKES THE CAKE. I LOVE this yaoi! And waiting for chapter 17 is the utter WORST spot to stop at. ; n ; I really love Ryouma and his personality is soooo funny. xD Izumi can be a little clutz at times but his reasoning and personality is hilarious as well! And I'm REALLY fond of his otaku-ness. xD

Spoiler (mouse over to view)
I was really worried about Shougo being in some type of triangle with the lead and Ryouma, as he was on the cover of the first few chapters, but I'm so pleased he's not!

I love this yaoi and honestly Ryouma is the best guy ever. So funny. Some scenes are a little repetitive (like the spontaneous kissing) and thus lose their impact, but still, maybe because I am new to the yaoi fandom, I love this manga.