Login to add items to your list, keep track of your progress, and rate series!
Description
From Wingtip Cafe:
Suzu, an ordinary girl who possess extra-ordinary power to summon demons, was left with a flute, the only keepsake of her disappearing 'Father'. In the flute, dwelt the guardian spirit who responds to her plea in danger. 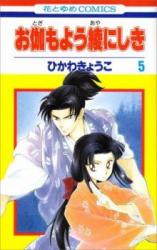 Pretty good
by follybaby
December 6th, 2013, 3:16pm
Rating: 8.0  / 10.0
Pros: It was the perfect length for the story line, not rushed but didn't drag on. Characters were built up quite well. Lovable/relatable, not annoying characters. Not overly predictable. Good story.

Cons: As others mentioned before, it does get a little political (but if you want to browse past a few pages you'll catch the drift pretty quick). I'm a romance fan, and there wasn't enough lovey-dovey for my tastes. No spoilers here though.

It's a typical Hikawa Kyouko work
by kichiX
July 16th, 2012, 11:40am
Rating: 6.0  / 10.0
Her works are always a pleasure to read. Sure enough, the good guys always win, and the battle is always a clear-cut good and against evil, but they're nice stories to read. Her female protagonists are a break from the annoying heroines that are rife in the shoujo genre, and this is no exception. I would have liked to see Suzu develop and learn more techniques rather than relying on Ojaru-sama but in the later chapters she used her own power to defeat the Big Bad.
This manga is not big on the romance, so if you're expecting lots then you'll be disappointed. It was minimalistic, which suited the story and allowed for the focus to be kept on the main plot. Having a character around later on who openly told them what their feelings were was a big change from usual shoujo and was both a breath of fresh air and comic relief.
It's a nice historical-romance manga that plants itself firmly in the shoujo genre but isn't held down by any of the annoying traits of the genre.
Was this comment useful?  Yes

love all
by lily_kitty15
August 5th, 2011, 1:23am
Rating: 9.0  / 10.0
i just love all the stories by this author/artist
i also like how our main male and female lead act towered each other as they start to realize these feelings for one another and the only boring part is when it get political stuff so boring sometimes i try to skip that talk and just get to the more fun parts.
Was this comment useful?  Yes

My opinion
by Krysic
January 3rd, 2011, 2:32am
Rating: N/A
It's a really good manga. I really like it!
the ONLY thing about this author/artist that I don't like, is that she gets too political-like in her stories. It kinda gets...boring and drags on and I can't finish the manga. Not a huge amount of suspense. Lotta action though, and it's cute! Just wish she made it a little less....dull in some parts.
Was this comment useful?  Yes

a must read
by fenris89
July 20th, 2010, 8:04am
Rating: 10.0  / 10.0
this manga is so great. it's definitely worth your time to read this. i'm surprised this isn't more popular. though the art is lil bit old style, its very cute and captivating. the plot is full of twists that makes it unpredictable and engrossing. the heroine isn't like the typical one nowadays, she's sensible and quite mature for her age and not a feather-brained idiot or crybaby at all. lastly. thanks so much to the scanlators, great job!..

Yes!
by thebikernun
January 2nd, 2010, 2:57pm
Rating: 9.0  / 10.0
This is a really good manga. The storyline and the art are an excellent combo. I would have rated it higher but I'm just not feeling the transfer of feelings from affectionate brother/father figure to lover.
Was this comment useful?  Yes

Totally recommend this
by NightAir
July 22nd, 2009, 3:17pm
Rating: 10.0  / 10.0
An excellent story. I hold a preference for historical manga, especially when it comes to the era where they wear kimono (I don't know why, I just do) [edit: I believe it's somewhat Heian era-ish?[editedit: According to the category, it's Sengoku era.]]. It really made me happy to find out about a SHOUJO that was like this. And seeing as I really enjoyed From Far Away, I went to see what this one was like, being a great deal more recent.

I was not disappointed. From the first chapter, this manga enraptured me. It's like the manga you're always: OMG SO GOOD-ing about. I'm serious. It's this good.

Unlike other manga, this one takes its own route in being original.

Instead of the regular stuff, about 11 years ago from the start of the story, the male lead was Suzune (the main character)'s 'Toto-sama', so she thought of him as a father figure. 7 years old then, Suzune has changed into a young woman of 18, the exact same age as Shinkuro. And now, they're both feeling for each other. It's sweet in its own way.

All the characters are equally likeable and really good--the characters aren't stretched out to unbelievable plots. Suzune is a clutz, but she's a good girl that you can't help but like. The monsters she summons are really cute too. I laughed and cooed at them.

Shinkuro blushed, don't you know, in chapter 9 just thinking about Suzune, and I found that GOD AWFUL CUTE.

I especially love Ojaru-sama with his "Ho. Ho. Ho." Yes, that sounds a bit like Santa. No, he does not look like him. Ojaru-sama makes that laughter very refined and elegant. I just like it.

This is a fantasy, so it's not historically accurate, which means you don't have to learn history, so that makes it a bit better for everyone who just wants a lighter hearted approach. Hikawa-sensei did excellent fight scenes for From Far Away--and I liked the action scenes in this one--flowed very smoothly.