Login to add items to your list, keep track of your progress, and rate series!
Description
From Queen2408 via MyAnimeList:

Renji and Kenta are musicians, they meet each other thanks to the friendship between their bands. Each musician has different reasons to play, be it love for the music, a strong desire to surpass their fears on stage or even just for someone's approbation.
While these bands are struggling to be known in such a competitive world, Kenta is struggling with a different problem in his love life; can he be a replacement for someone else? 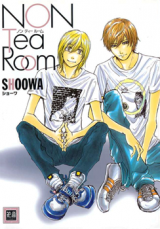 Who's who?
by hotarusasaki
January 15th, 2014, 5:37am
Rating: N/A
I liked the first story way more as human/robot relationships arent really my thing.
I hope I wasn't the only one but the characters were confusing to me at first. so here's a short description of them in the first ch that might be help to someone:
Yuu: Dark wavy/curly hair.
Kento: Light short hair. In the same band as Yuu. Quiet and calm.
Arthur(aka.Asada-San): In a different band. Dark short straight hair.
Renji: Light long(er than Kento) hair. Bubbly and chatty.

I also found the Narrative Point of View confusing sometimes but I figured most of it is in Kento's POV in the first story.

The story was dark and angsty with bits of Hurt/Comfort. Yet it was still really sweet with Kento being so caring. It was quite a nice misture in my opinion. The art was rough but it was still clean and clear. It wasnt bad art but rather I think e author purposedly used this sort of style as they thought it would fit the story, which it did. Like others said before the art gave the story a certain feel, perhaps a life-like feeling. The author has got a nice balance where everything is simple and easy to read but complex as well. Great story! and I'm including the second one too when I say that. It was just as nice but happened to not be my thing, still a job well done!
Was this comment useful?  Yes

I couldn't finish this ....
by kitty1826x
October 6th, 2013, 2:36am
Rating: 2.0  / 10.0
I read Jin to Neko wa Yobu to Konai first. Started reading this, and was hoping for something else. After a while I just stopped reading this and mostly skimmed the rest of the first story. By the time I was done I was so ticked off I couldn't read the 2nd story. I'll probably try to read the other half at one point, but right now it seems unlikely.
Spoiler (mouse over to view)
Honestly I was hoping that Renji would end up with Arthur. I don't know something like Arthur getting over his dead ex, and his ex and Renji are two different people, but still loving Renji. So the more I saw Renji and Kenta together the more ticked off I got.(If I had not read the other manga first I probably wouldn't have minded the couple here.
Was this comment useful?  Yes

Strangely addicting
by sandyatthebeach1
June 3rd, 2013, 7:03pm
Rating: 10.0  / 10.0
It's sort of hard to explain- this manga just has this sort of mellow, deep, life-like quality to it. It's as if everything on the surface is calm, but still you can tell that there's more underneath. It just has a strange current running through it that draws you in without any real, explicit explanation I can think of. After all, Shoowa-sensei sort of just dumps you into the characters lives without any real introduction, and you just have to get used to it along the way. It's a little confusing at first, but I'm totally okay with it in this case! It also took me a little bit to get used to her art, since it's sort of sparse and has an almost raw quality to it, but her style totally fits the manga. Everything about it is pretty cohesive- her art, the story, the emotions, her way of delivery. It all seems simple, but still, Shoowa manages to convey the character's emotions perfectly. There are so many unspoken words expressed through her art and story, and honestly, it's really beautiful. The robot story in the end was so touching and well-done, it made me tear up... took a lot of willpower not to get swept up, haha. This manga is definitely recommended!

Great.
by MirayAllen
February 18th, 2013, 5:58am
Rating: 8.0  / 10.0
This was a very good read. Both stories are really interesting - plot and art-style - and I wouldn't mind them being longer -- especially the second one, since the first one felt quite complete to me. Enough has been said by fellow reviewers so just go read it. It doesn't take long, but you won't regret it. Thank you once again Dangerous Pleasure <3
Was this comment useful?  Yes

Good
by Mochi__x
August 4th, 2012, 1:07pm
Rating: 8.0  / 10.0
I liked both stories, but I think the second was slightly better. It's a good concept and I really liked Susumu. Despite not being human he felt real emotions and his feelings for Modoru were so clear from his actions (especially the message on his phone - so touching). He was a really sweet seme, and I liked him even more after reading the extra chapter haha XD

SO worth my time reading it!
by liontaraki
April 18th, 2012, 7:32pm
Rating: N/A
This is the kind of BL romance I enjoy reading the most! Both stories didn't have an overused plot, I like happy endings, each partner in both couples were (not completely but still) very faithful to his other half and it gave you the feeling that these guys will never face huge dilemmas in their relationships and/or break up! A great read, a great work by a really talented mangaka!

p.s. I liked the second story better. I couldn't agree more on Shoowa's approach on robotxhuman romantic relationships.
Was this comment useful?  Yes

Quite a rare species of BL
by Trifoilum
February 27th, 2010, 12:22pm
Rating: N/A
This is Shoowa's first scanlated work, and so far it's amazingly refreshing.

It's slice of life, yet the background and the subtle depths are quite a lot. The mood is pretty sweet and fuzzy, yet it doesn't make you sick, and it's very subtly hidden-- no warm bubbles or flowers or even dramatic expressions. It's very human, and sweetly so.

Plot-wise, it does use certain cliches yet it goes along smoothly. There's little 'plot push'; there are hidden information, but it doesn't make a twist; it only serves as further indication.

Giving a generalization, I'd say it's Kotobuki Tarako (plot-wise) meets Yoshinaga Fumi (style-wise), added with a pinch of Yamashita Tomoko (narrative-wise) just for the taste.
Was this comment useful?  Yes

Answer for arethusa
by ZeroNine
February 7th, 2010, 4:39pm
Rating: 8.0  / 10.0
non tea room could refer to "observations of a non-traditional/modern/ordinary life in a group". A tea room is also an old reference to sex houses that disguised as tea rooms where patrons gathered for tea and sexual companionship. With both references combined, the title implies "observations of love (and sex) among friends in today's world".

I love shoowa! Thank you, dangerous pleasure, for scanlating this; you'll always be amazing and loved for following this through.
Was this comment useful?  Yes

The story is simple, but it's the expression brought forward on each panel, especially on the character's faces, that speaks all those unspoken words that makes this manga stand out.

EDIT: Thank you ZeroNine. That was very enlightening.

I had qualms with how the first part of the second story went (something about artificial beings--no matter how sentient), but the second chapter more than made up for it. It was very endearing. This about jumps it up to a must-read for me.

0_*
by mica363
January 25th, 2010, 10:41pm
Rating: 9.0  / 10.0
Wow, I am having a hard time putting my finger on what it is that is making me like this so much. The sketch like drawings give it the feeling of a manga at a rough draft stage, yet it has this incredible softness that makes it so beautiful I can't stop reading it. It really does, as Tentacle said, give that warm feeling.
Was this comment useful?  Yes