Login to add items to your list, keep track of your progress, and rate series!
Description
In the gritty backstreets of Paris, Jin ekes out a living as an informant while his buddy, Mari, does business as a hitman. They've been friends since they were brats, but Jin's demanding behavior has Mari growing increasingly resentful. Even so, Mari can't seem to cut his ties to Jin.
Has their friendship lasted so long it's become impossible to break? What will happen when Jin's new live-in boyfriend ignores Mari's warning about Jin's carefree lifestyle…?
(ch.4 about guys from Non Tea Room) 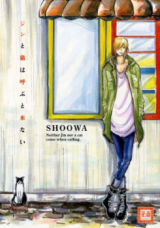 A collection
by Himeowchama
April 10th, 2017, 7:13pm
Rating: 8.0  / 10.0
Of fucked up stories. The cliffhangers kinda imply that life doesn't really end at that point of time until death. It always means that there will always be tomorrow. Although because of that, I felt incomplete. But at the same time, it's the beauty of it.
Was this comment useful?  Yes

Like
by hotarusasaki
October 4th, 2014, 7:48pm
Rating: N/A
I liked this one, especially the darkness and the show of lonliness. I do wish that it could have been one long stroy though but I guess the author wants to fit in all the short stories that she comes up with...Because of the random short stories I like the prequel more but gosh Jin x Mari is great... Shame that it kind of didn't happen at the same time...
Was this comment useful?  Yes

Alright..
by MirayAllen
February 18th, 2013, 6:56pm
Rating: 7.0  / 10.0
In Mari and Jin's stories, Rio was the only one I could actually care for. He almost brought tears to my eyes. Such a beautiful and wonderfully developed character. I would love to see more and more of him. As for Mari and Jin themselves I couldn't really care for what was going on. Back in Tobira I already didn't, apart from the fact they reminded me of Matt and Mello so much. And of course Mari is extremely hot so I'll grant him that. But their story was still quite enjoyable, even though I wouldn't suggest it to anyone who's in the mood for love. You won't get past many broken hearts here, possibly yours.

Chapter 6 was probably my favourite. It made me laugh and I love to laugh. Plus, I really like Cys and Kai :3
Was this comment useful?  Yes

Feels unfinished
by whydontyoujustsay
January 28th, 2013, 6:33am
Rating: 6.0  / 10.0
I wish there was more to the main story. I really like all of the characters, and would have loved to see more of their background, and futures. Still not bad overall.
Ch. 5 was... just silly. not worth reading unless you just want to read some fluff.
Ch. 3 was my favorite of the one shots. Also wish there was more to that, but oh well.
Worth reading I guess, but not worth reading twice...
LOVE the art

Different isn't always a bad thing
by mimi639
January 5th, 2013, 7:52am
Rating: 9.0  / 10.0
The mangaka has an unlike way of telling a story, the pacing it's slow and calm, they told u every important detail and that makes u get engaged to this story... , and really it's so full of emotion that u even suffer like this poor characters that she/he created...
Even thought it's a kind of sad manga... it's different... and that's what it makes it interesting...
Was this comment useful?  Yes

Awkward But Worthwhile
by MightyMaeve
May 26th, 2012, 10:48am
Rating: 8.0  / 10.0
I wish the castrated boy had at least a tankobon of chapters for him alone! Now there's an issue I have never seen seriously examined in romance manga!

Anyway! The men in these stories speak of intelligence and complexity, but the reader never really gets to know them. The storytelling leaps, assuming too much, and the incomplete feeling is frustrating because what IS offered is so compelling!

The art is exceptional! It has a sketchy, gritty feel, and it offers realism of emotion with its simplification of faces and moments.
Was this comment useful?  Yes

interestingly painful
by whitespade
April 10th, 2012, 6:02am
Rating: 9.6  / 10.0
this collection is littered with broken people in broken relationship. there is no perfect happy ending for any of them but somehow they can take it with a smile. shoowa remind me of kano sensei with her simple art and melancholic air it exude. overall the stories are depressing but the end may lighten up the mood a bit. definitely worth reading.
Was this comment useful?  Yes

wow
by LovelyCookie
February 24th, 2012, 8:56pm
Rating: 9.0  / 10.0
This is collection has quite a lovely set of stories (except for the one in chapter 5). Such drama is not usually my cup of tea but all these stories (except for chapter 5) had me quite exited about turning the next page. I love them all (but seriously the one in chapter 5 ruined an otherwise perfect manga. I hated it so much I'm crying tears of frustration! It was disgusting! DISGUSTING!!!). I greatly recommend this to all fans of serious stories with a beautiful plot (but skip chapter 5).

Great Art, Great Story!
by Dezi
January 21st, 2012, 5:58am
Rating: 9.0  / 10.0
I really liked this manga. The Art was awesome and the stories were great, too. I wish there were more mangas by SHOOWA! Unfortunately I already read them all.
The first story was great but I felt like there was something unfinished about it. Too much left unsaid and unthought. I sooo would have liked a continuation...
Was this comment useful?  Yes

Platonic love does exist even in yaoi manga
by phanata
January 11th, 2012, 10:50pm
Rating: 10.0  / 10.0
This phrase made me freeze: "I understand love. I understand loneliness. Maybe it's not something I can really say, but...If you live like that. When the time comes. When you find someone you're really in love with...Doesn't it make you feel empty?". I have always thought that only Miyamoto Kano can create such fine yet depressing love scenes, but now I know that Shoowa can too, and I absolutely love this!

it's a very deep psychological story. what kind of relationship have Jin and Mari? do they love each other or they are just friends? in this manga we face such rare, beautiful but tragic in adult ages thing like platonic love. They definitely love each other, their relationship are too disinterested and unselfish for friendship. but drama is that there is absolutely no sexual tension between them. "If you are not lovers so what are you doing in BL manga?" They are lovers but not in a physical way. That's why Jin will never be satisfied and will never stop fooling around making himself and his lovers unhappy. that's why Mari will never close in with anybody.
Was this comment useful?  Yes