Login to add items to your list, keep track of your progress, and rate series!
Description
A girl from the modern world aspiring to become a pop idol slips into the body of Ashley Verrence, the main villainess of the novel she was reading. In the original story, Ashley was a crown princess who lost favor with the prodigal crown prince and ended up being executed. The new Ashley has one year to change her destiny and her first steps towards a new future start with preparing a play using her modern knowledge. Can she make amends and escape her death? 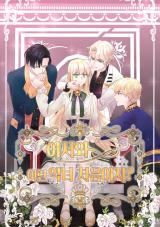 It was just a cringe-fest
by angelhalo224
September 4th, 2022, 1:02am
Rating: 6.0  / 10.0
It was like trying to fit a square peg in a round hole... awkward and not pretty. Too much of the plot line felt "forced." I think I would have liked it better if the FL had intentionally decided to recreate Kpop entertainment industry rather than this ... awkwardness. Also, a little more assertiveness would have also helped the storyline because it felt like there was too much meandering.

The art was good and the characters were well designed. It was just the storyline and premise that did not execute properly.
Was this comment useful?  Yes

Lots of eye candies
by hoBRO
November 8th, 2021, 12:20am
Rating: 7.5  / 10.0
I mean, I've read till chapter 27, but it's alright. I mean, not great but not bad. I do think that she should be a bit more cautious since she's still a daughter of a duke who's not just influential, but rich as well. If her guard is too low, then she could be kidnapped or in trouble because of people wanting to ruin her and her family's name and influence.

OTHER THAN THAT, I'm still reading since I do want to see where she'll go with her plan of an acting company.
Was this comment useful?  Yes

Unnecessary ogling is unnecessary
by Utsukushii Yume
April 24th, 2021, 6:58am
Rating: 4.0  / 10.0
The art is nice, but I don't really like the FL. I personally am not a fan of a protagonist male or female ogling peoples bodies so much they can't even have a straight conversation, its one of the reasons I don't read manga with too much Ecchi. Pointless ogling and drooling is just annoying for me.

There are only 4 chapters out, but I'm not interested in continuing. I think people might like the typical modern day girl attitude the FL has, just not me.

The plot is a little forced as you get unnecessary scenes like in one chapter she goes to visit someone for no other reason other than to ogle him and then falls asleep in his office for no reason, then another character comes in to hand her the plot. lol That is literally what happens.

Cutting that entire scene would have taking nothing from the story as they could have just as easily had her run into the actors, have her gawk at their talents (instead of the looks of everyone) and then easily presented both the plot conflict and FL inner conflict in one simple moment.

Instead we get the FL ogling men in one scene, feeling inadequate in another scene, and then tossing her sad feelings away b.c sex appeal trumps all other emotions you may be dealing with at the moment.