Login to add items to your list, keep track of your progress, and rate series!
Description
Kagami and Shingo are a passionate couple. Is their mutual attraction strong enough to survive some misunderstandings? Will the bond between them grow stronger or will the relationship break apart? Continues the story of Shingo and Kagami. 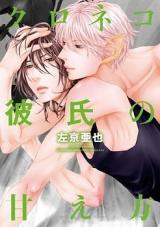 Excuse me, but I love this series.
by PansyWansyLinsy
June 1st, 2015, 9:07pm
Rating: 7.5  / 10.0
I'm going to be upfront about it, I'm a big Kuroneko fangirl. Perhaps my favoritism colors my perspective, but I just want to defend Kuroneko against some of it's biggest criticisms; mainly that it's purely smut or porn without plot. What people are overlooking - and something this installment illustrates plainly - is that their relationship plays out in the sheets. The problems they have, the insecurities that plague them both is told through their physical intimacies. While I loved this installment for it's drama, it also marks a low point for the normally adoring Kagami. I loved how sweet and vulnerable Shingo is in this volume, but Kagami's prince-like cruelty is brought to the forefront when he doesn't know how to handle Shingo's insecurities. There's a sex scene in the middle chapter, I believe, that continues to illustrate their fracturing attitudes towards their relationship. It's a sensual scene fraught with humiliation, hurt, and anger.

I don't think anyone needs my recommendation to read her work. If you've come this far, you're likely to proceed. Five volumes later and I'm still an avid reader as I was in the beginning. Even if the sex can be something of an overload sometimes, the heart of this manga is still a simple story about a prince-like actor who loves his precious black cat.
Was this comment useful?  Yes

decent
by butako chan
June 30th, 2014, 11:49pm
Rating: 6.5  / 10.0
I'm reading this purely as a smutty yaoi, therefore the story really isn't something I care too much about. If I were to focus on story though, it's mediocre at best. This is pretty much porn with decent plot. I like the art style of this mangaka and it makes me squeal a bit every time I see them transform into animals because of how cute they look. The characters have little to no development...Even the main characters. The "love" is generic and rather nonsensical. As a casual read, it does well. If you're looking for anything deeper than an erotica, then look elsewhere.

Well..
by OmNom
January 6th, 2014, 10:46am
Rating: N/A
Hmm, what can I say about this one.. It's obviously very graphic and full of smut for the enjoyment of fangirls just like its prequel all right, and for the most part I'm quite okay with what's presented. Though I'd be lying if I said this manga is either the best smut I've come across or is loaded with the kind of drama I had hoped for. I'm not sure why, but the whole thing just doesn't feel completely right for me, almost like there's a little bit of something lacking in both departments, or maybe that's only because I'm too skeptical and demanding..? Either way this is still quite a tolerable series and I could see its popularity soaring even more in the future (with all that smut that is provided), I guess I've just outgrown the usual hype and standard, is all.
Was this comment useful?  Yes

Simply lovely~
by Moonpuzzle
November 23rd, 2013, 1:24pm
Rating: 9.0  / 10.0
This was pretty seductive in my opinion. I even had to go ahead and quickly search for the prequel, which I went ahead and bought (even though I'm still in the learning process of the Japanese language).
Was this comment useful?  Yes