Login to add items to your list, keep track of your progress, and rate series!
Description
From Girls' Generation Scanlations:

The werecat Shingo is able to change into a black cat, and as long as someone has the looks and body that he likes, he'll sleep with just about anyone. Falling for Shingo because he was overwhelmed by his strong masculine aura is the No. 1 popular actor, Kakami. Amongst all the playful teasing and messing around between the two, Kakami suddenly shows his beastly nature...?! 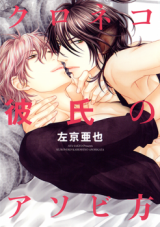 ?!?!
by Himeowchama
April 14th, 2017, 9:05pm
Rating: 1.0  / 10.0
Yea I get it, the art was good. But the plot wasn't forgivable. Wasn't that rape?!?!?! Why is everyone loving it? And for the person who read this in the yaoi world, one day when you spend too much time reading yaoi, you're gonna have pretty good standards and non-consensual sex wouldn't be one of them.

I can't believe this is so popular/highly rated.
by Erizu
February 3rd, 2017, 7:56am
Rating: 1.0  / 10.0
I started reading it by mistake (I tried to find a manga based on an image and thought this one might be it) and didn't see the tags, particularly the "rape" tag. What a huge mistake.
Right at the beginning when the actor asshole drugged the other one and raped him when he was unconscious I was feeling kinda sick but decided not to quit yet. Now I'm on chapter three and I'm officially giving up.
The top is an pushy creep that doesn't know the meaning of "No.", the black cat dude... well, he has a lot of sex and I foresee some cliché angsty past but other than that he doesn't seem to have much personality (thought his cat-like behavior is cute, I'll give him that). Roughly 1/3 of the 3 chapters I've read is just sex. But if reading about loads of (consensual and non-consensual) sex during which one or both parties are prone to grow cat ears and tail is your thing then go for it.
And the art doesn't seem that stunning to me.

Oh, and someone likened this to Sex Pistols.... yeah, I don't think so. I remember Sex Pistols as a manga that is mainly comedy-based whereas Kuroneko Kareshi seems largely smut-driven. The only thing in common is the animal transformation part.

WARNING, for those who haven't started this series yet
by Kleineputchen
December 20th, 2016, 4:11pm
Rating: N/A
So to those who haven't started reading this yet, or those that only read the first or second volume of this series, I must warn you. As I've been very disappointed myself and would have liked to know beforehand, I think others might appreciate knowing this.

Sensei looks like she is relying too much on her art, and the smut. Yes it's beautiful, the sex is fucking hot, BUT with a series this long, without a good plot AND character development, your story ends up an empty shell, beautiful but empty. I'm usually a sucker for good art and smut, and can often forgive the lack of plot, but it dragged on aimlessly for so long here, it even got to the point where the sex annoys me, which is extremely rare. The story's going in circles, with big incoherences. Shingo's and Keiichi's character developement don't make sense, which is irritating.

So if you want to try it, go ahead but you'd better stop at volume one or two, after it's just the same thing repeating endlessly making less and less sense, and being more and more frustrating. Even so, some might still appreciate this to the end.
I'm saying all this because I'm frustrated at how the great potential of this author and story are wasted. There could have been so much more depth and development to this manga, it really is a shame. I strongly hope for Sensei to realize this and offer us better mangas in the future.

Smutty And Lovely Art
by nezushi
May 25th, 2016, 5:29pm
Rating: 9.0  / 10.0
Note: Finished this manga three years ago and i don't know why i never wrote a comment.
This series is just a hot smutty mess and made me want to scream at the characters for making such stupid decisions. So much drama is present, so if you hate stories that are filled with that type of content than you might want to skip this one. Even tho it annoyed me, i still enjoyed it. The art is beautiful and very well detailed. I loved the supernatural factor that the mangaka added to this. Super cute catboys! Oh and yes, there is a shit ton of sex in this manga hence the smut tag. I personally don't mind it but i can see why others would.

The main relationship is very angsty, which got on my nerves at times because they could NOT understand each other properly. (constant misunderstandings!) Welp let's talk about shingo and how much of an insecure and sensitive character he is and why that's a major problem in this story.
Spoiler (mouse over to view)
He constantly questions himself about whether kakami truly wants to stay by his side forever and always assumes that they're doomed to fail. And in the series we learn that scent is very important in a romantic relationship between werecats because it shows how much their partner loves the other. If the person can smell a strong scent coming off their loved one, it shows trust and love. Shingo tends to lose his ability to smell kakami a lot because he is always second guessing himself.

This insecurity that shingo has tends to throw kakami into a fit, which is understandable. I can sense the frustration coming from kakami and you can tell that he adores shingo so much. He is desperately trying to show him how much he treasures shingo but no matter what he does or says, shingo believes that it won't work out between them. So kakami puts up a cold and aggressive front to hide his true feelings of hurt and sadness. Also let me just say that i do not condone any of the actions that kakami does during his states of anger. He can be a total asshole. But man, can this viscous cycle of emotions cause so many problems. It gets pretty tiresome. Moving on from that, i loved seeing kakami's leopard spots appear whenever he got excited. It's absolutely adorable seeing him all flushed and embarrassed when it happens and ahh shingo just adores those spots too! <3
Little rant: I need to point out that the mangaka is dragging on the series and making it less enjoyable because she re-uses the same plot and issues. It was interesting the first time, but now it's becoming old.

Really good but too much sex
by sakuraraine
January 16th, 2015, 12:27am
Rating: N/A
I never thought too much sex would be a bad thing. Overall the story is still amazing and I love the characters and how much they love each other, but the mangaka seriously needs to show them resolve things WITHOUT sex being involved! Or have sex be their go-to answer! I just want to see them go on dates and get all blushy without getting all turned on all of a sudden.
I just really, really, really want to see them on a date. I think it'd be so cute and at least change up the pace. It's really repetitive and the sex gets repetitive too, it's just rough and begging most of the time.
I think there could be a little more drama with the characters, enough to build their relationship and have character development. I also wanted a lot more fluff. The sex is great, don't get me wrong, but after you marathon the entire story of Shingo and Kakami (including all the sequels) in one sitting, like I just did, all the sex tends to blur together and it doesn't seem as hot anymore because it's all repetitive. It'd be a perfect ten if the mangaka just changed things up or slowed things down and made it more romantic instead of just fast and hard and raw all day, every day. lol
Like yes, the smut was hot, but I didn't get turned on each and every time I saw it because it was literally every chapter and it was all basically the same. I just want a little more something that tugs on reader's heartstrings a little more
Was this comment useful?  Yes

Anyway, let me inform you that I don't like furries. They are gross and disturbing to me. If this WASN'T furry Yaoi, I'd have given this a higher rating. This is all in my personal perspective.

Other than that, is it good? Ehhhh, I suppose so. I can't really say what's so excellent about it...oh! I really like the uke. Not only is he cute, but his actions are appropriate. Like, MY GOD, an uke with common SENSE. RARE.

The art is AUUUUUGH!! As in good. The shading, the detail, the AUUUUGH! I like. A+.

WHY IS THE SEX SO FORCEFUL!? I swear I've never seen a guy RAM into another guy so hard before...and I've read Yaoi mangas about the mafia. It was a little disturbing, the seme definitely goes a bit overboard. Actually, other than the seme's DELICIOUS BODY, I don't like him. He's so perfect (in a bad way) and he FUCKING SPARKLES. I thought he was a leopard, not a VAMPIRE. Then again, I could believe he was a vampire...

Pretty Epic! <3
by Lolly45
December 28th, 2013, 1:09am
Rating: N/A
It was adorable! The connection between the characters was cute and awesome! The sex scenes.... man.... there were so many and they were all awesome! But most of all.......... the art! Waaaahhhh, I absolutely love the way the characters were drawn! And I loved them much more when they were naked! Gotta admit, this was a good yaoi.

Bad for my heart and eyes
by Kinky-Chan
December 4th, 2013, 5:56am
Rating: 9.0  / 10.0
Like seriously. I was practically "nosebleeding" in every single chapter. Everything is too warm, too fast and too hot for me. Not only because of the sex scenes but having two hot guys smearing and topping each other is bad enough to send someone to the hospital.

Oh and how i love the humour in this manga. Wait, and the leopard form too.

Cats and Leopards!
by Moonpuzzle
November 23rd, 2013, 1:26pm
Rating: 9.0  / 10.0
Now this is an interesting combination that I just had to get my hands on. I couldn't help it! They were cute together, especially the reactions the seme inflicted upon our dear uke. It was so tempting, I was forced to buy the book internationally.
Was this comment useful?  Yes