Login to add items to your list, keep track of your progress, and rate series!
Description
Seducing the guests to make them pay the most, that is the job of a host. Takashi, currently the No. 1 host, is an apparent professional when it comes to being a host. Being a host isn't Takashi's only job. The Persona XII, guided by the stars are to preserve the balance of fate. The eyes on an assassin serves the guidance of the stars. 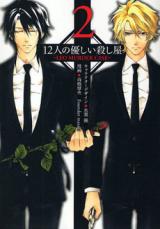 Unsure?
by hellheavenangel
January 1st, 2017, 12:50am
Rating: N/A
I don't know if it's because of the fact I've read too much or not but I find these short series to be overly cliched in a sense. It was pretty predictable or at the very least, not surprising at all. Stayed in for the artwork, not going to regret reading this series but it's just another good short series, pretty decent if you just want some kind of host/organization related theme.

On the other hand, for a short one, it connects without really jumping all over the place so I liked that. Just wished they focused a bit more on the organization. Once again, it's a decent series that has some eye-candy as well (lol).
Was this comment useful?  Yes

Confusing yet untypical Shoujo.
by Yankee-chan
October 4th, 2014, 7:47am
Rating: 8.0  / 10.0
Well, it is confusing. The irritating flow of the panels and the informations the reader get, are not really doing this work any good. But - I like the drawing style and the unusual setting, which doesn't take you straight to some harem-like girl, for which every guy falls, or stereotyped love scenario. It is rather a crime story, that develops to some mystery tale, which might even be the result of the irrítating points.

Anyways, it was a read, that at least I won't regret and so it's in for 8 points.
Was this comment useful?  Yes

Slightly confusing but good overall
by kichiX
August 23rd, 2010, 12:22pm
Rating: 3.0  / 10.0
This is VERY annoying.
When it looks like the plots about to get into thicken and the mysteries are at least partly to be explained, the scans stop. D:<
Anyway, enough complaining. This manga's a bit jumpy and unexplained in the first 7 chapters. You can tell there's some sort of mysterious organisation dealing with people who have commited crimes but not much else. I'd have liked to see some confirmation that Takashi is skilled in some form of martial arts/swordplay instead of just a knife being slashed around. Nevertheless, if you accept that you're not going to be told much about the 'why' this is a pretty good read. The panneling in some places is...imaginative and sometimes the speech doesn't seem to fit (I couldn't decide whether this was read right-to-left or left-to-right :T)
Overall a good, if slightly confusing manga. I wouldn't say its the best out there, but it definately isn't the worst!

I LOVE IT.
by maity
September 3rd, 2009, 7:58pm
Rating: 10.0  / 10.0
Seriously, I do. The bishies are so good looking and that's not the only thing that's appealing about this manga. The Art is great and I also really enjoy the storyline. It's different...though used before...sort of. I have to say that it's entertaining and not a bit annoying to me. There's improvement and development with the characters and the plot so I'd say this is a page turner. READ IT.
Was this comment useful?  Yes

I like it
by dezin19
August 27th, 2009, 12:32pm
Rating: 10.0  / 10.0
It's still too early to know for sure, but I think the first 3 chapters made this series pretty interesting. The chapters themselves were good on their own. What I liked was the obvious allusion to a deeper plot and more complex characters. There is already a lot of mystery surrounding the main character, and it keeps you wanting to read more.
Was this comment useful?  Yes

interesting
by mileen
August 12th, 2009, 5:06am
Rating: N/A
even though the plot a little bit confused what this fuss all about. Love the art, the character but not deep enough. Maybe too have a look at bishounen, read this manga. anyway, 7 thou.
Was this comment useful?  Yes