Login to add items to your list, keep track of your progress, and rate series!
Description
A Campione – a Godslayer – is a supreme ruler.

Since he can kill a celestial being, he can therefore call on the sacrosanct, divine powers wielded by the gods.

A Campione – a Godslayer – is a lord.

Since the power to kill a deity is in his hands, he therefore looms over all mortals on Earth.

A Campione – a Godslayer – is a devil.

Since for all mortal who live in the world, none can assume a power to match his!

Kusanagi Godou is a 16 year old boy who played catcher and fourth hitter in senior league baseball until an injury put an end to it in junior high.

As the spring break of his thi... More...
A Campione – a Godslayer – is a supreme ruler.

Since he can kill a celestial being, he can therefore call on the sacrosanct, divine powers wielded by the gods.

A Campione – a Godslayer – is a lord.

Since the power to kill a deity is in his hands, he therefore looms over all mortals on Earth.

A Campione – a Godslayer – is a devil.

Since for all mortal who live in the world, none can assume a power to match his!

Kusanagi Godou is a 16 year old boy who played catcher and fourth hitter in senior league baseball until an injury put an end to it in junior high.

As the spring break of his third and last year of junior high came around, he got involved in an adventure and ended up slaying one of the Heretic Gods, Verethragna. Thus, he became the youngest - and seventh - Campione.

Now that he is a Campione, a godslayer, young Godou must defeat the troublemaking gods with the help of his followers! Less... 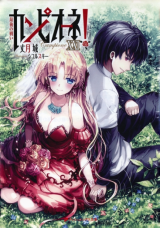 When you're a God-slayer you're an idiot, and apparently dense
by dim1
May 2nd, 2013, 8:57pm
Rating: 9.0  / 10.0
Ass-kicking MC with an Ass-kicking harem. would easily describe this series, but yeah you have the seriously overused dense MC that is OP as hell, yet can't do jack without his lady-friends.
The setting is very unique, in the sense that if a man stands in your way you kick the man's ass, and if a god stands in your way you kick it's ass and get it power. Almost makes me smile since I love mythology of all sorts, and this series is overflowing with it.
Best part about the characters are that the harem girls aren't just ornaments or there to make drama, nope they are sword drawing, spell weaving, future seeing fighters, that actually do work and not leave it all up to the OP MC.
Now to problems with the characters
People complain that Godou is dense and it's cliched, but ask yourself would he be able to keep his harem the way he does if he wasn't in complete denial nor would it be as fun to read?
Godou can't be Kirito since if he says he's going for one girl he gets royally screwed out of the support the other girls give him in combat. Also, in the later volumes you get to see Godou unchained, without his denseness and he's damn awesome without it, but you don't get the full impact without seeing him in denial.

So, I mostly like the series for it's references to mythology and stuff, an average romance harem plot, and over the top highly destructive battles that occur on a daily basis. Though the blatant harem is interesting or at least on the level of To-love-ru, where Erica plays Momo.
Was this comment useful?  Yes

Overrated, Cliche and Formulaic
by Bleach-No1-Manga
November 22nd, 2012, 5:45am
Rating: 1.0  / 10.0
"Rinse and Repeat" as people below me has already noted, every volume feels just the same except different mytho and added cliche line NOTHING NEW

i admit it i loved it at first but as i read each volume i just couldn't distinguish this fact that it feels just the same, his Harem keeps growing but sadly the story remains as stale as ever

had potential that's all i would say

Each volume is the same story as before...
by wotonito
October 23rd, 2012, 11:23pm
Rating: 7.0  / 10.0
While I must admit, I certainly enjoyed learning about the mythologies and how they're all tied together... The problem is that each volume is basically the same as before, as stated by Burasu.

Another problem is that there is no suspense, bad things happen in this story as often as they do in Fairy Tail. That is to say, nothing happens.

My last problem with the story is that the author seems to have a male superiority complex... It's easy to notice if you're paying attention for it. I try to look for signs to show that the author shows females triumphing over males somewhere but ultimately a theme of this story is "Males are better". This is actually what made me build up my dislike for the story, although the lack of suspense just tore my interest to pieces. And threw every piece into a fire.

Interesting premises ruined by formulaicness and lack of character development
by Burasu
September 18th, 2012, 9:38am
Rating: N/A
This novel series started well: interesting characters and background story. The use mythology in unraveling backgrounds and weaknesses of opposing deities combined with romantic tension and humor. The author is clearly well versed in history and mythologies and it's interesting to read how he describes these (though he has a weird fixation to wreck a lot historical sites in his stories).

Unfortunately, even the interesting parts turn stale after repeated over and over again without any progress. The novels pretty much follow the same formula 1. a renegade god appears 2. they try to fight it off but fail 3. ecchi ("information exchange") ensues 4. the power of ecchi conquers all. Each and every character is same as before except alll the girls falling in love with the main character one after another. I'd hardly call this character development, after reading six novels.

I don't know if Baka-Tsuki's partly less than adequate English translation is to blame for this (the first volume is well translated, but it goes down hill from there), but I've certainly lost my interest in the story. I respect that people are working on this, but lack of QC is a problem.

Don't judge it completely by the first 2 volumes. Getting better and better.
by myopius
August 14th, 2012, 11:24pm
Rating: N/A
I initially dropped this after the first 2 volumes because they both had the same formula. Volume 1 of Campione! begins with Goudo returning home to Japan after becoming a Campione while on a trip to Sardinia. In other words, you don't see how he became a Campione or how Erica fell in love with him. So anyway, the first 2 volumes had the same formula of an antagonist coming to Japan to stir up trouble and ending up facing Goudou. But then volume 3 covers how Goudou became a Campione (even though the flashback only covers half the story of what happened before volume 1, it's enough to understand Goudou and Erica a while lot better). It was good. Starting with volume 4, the plot development becomes a lot more dynamic and less predictable, the harem antics become a lot more intense, the cast expands and the stakes rise. I'm becoming quite impressed. What started as a fairly simple supernatural battle story with a couple of girls seemingly pointlessly fawning over the pure-intended protagonist, essentially turned into a Shana-esque overly complicated setting featuring admirable characters who have strong bonds with one another. My only complaint would be that all the girls are so close to Goudou now that I can't see him having the latitude to go all the way romantically with any one of them. Anyway, it's a good harem, with the girls all maintaining their pride, since Goudou basically can't refuse any of their advances, yet at the same time he has never said anything that would mislead them or betray their trust. Also, I may as well add that the author clearly knows a lot about mythology, so the exposition is intriguing, if a boring in volumes 1 and 2 given that I, at least, didn't know enough about the setting to truly appreciate it until volume 3.
Was this comment useful?  Yes

It takes a few chapters to pick up, but it didn't take long to realize this was anything but "generic":

1. You think you've seen dense MCs? You haven't seen this one. He's denser than a black hole, sucks in girls like one, but kicks ass like one as well. What's a god-slaying demi-god protagonist got to do if he can't out-GAR (and out-cheat, intelligence is important~) every other character in sight? Well, sleep (sometimes as a sheep) and pretend its peaceful, then go back out to kick more divine arse.

2. The girls are more like his followers than his consorts. Sure, there's plenty of females being pulled in by the gravity of legend (not that unrealistic; Achilles also got all the companionship he ever wanted), but his core includes only girls capable enough in their own rite to support him in battle, be it his knights or his personal seeress. Moeblobs get out of the way, this is team awesome embarking~

3. Forget the Emperor, it's the Empress who dominates the house this time. The main heroine doesn't have a problem with mistresses or concubines, but she will bully, manipulate, and blackmail the other girls into place to ensure her absolute dominion. Really, Erica's character is a piece of work. She might send shivers down your spine, but she won't leave you bored.

4. The mythology is very well done, even if an expert could still pick a hole here or there. Ever wondered how gods of different mythologies link? Ever wondered how some gods (like the famous Athena) would be pissed at life? Sure, the author takes some liberties (like all fantasy authors do), but he certainly does his homework in weaving a multicultural mythos into this epic tale~
Was this comment useful?  Yes