Login to add items to your list, keep track of your progress, and rate series!
Description
In Yoshiwara (present-day Tokyo during the Edo Period), the laws against prostitution were abolished and brothels were restored in the red light district. We meet Kichou and his "princess" who are the top courtesans of the Men's Brothel Quarters at Hanafurirou... 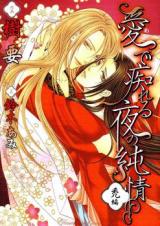 Beautiful but I have disagreements
by WhiteIsBlack
October 22nd, 2019, 7:11pm
Rating: 8.0  / 10.0
I enjoy the story very much but disapprove the rape scenes and longer conflicts. I don’t fully understand what the hell is minding in Kagerou’s head. I also dislike Kichou’s sour then quickly to soft side because I hate people treating others harshly at first before immediately being nice to them. It’s insane. Regardless, however, this couple is my favorite of the drama cd series.

Too cliche
by elbereth.elentari
April 20th, 2018, 8:57pm
Rating: 5.0  / 10.0
The plot is very cliche. Yes, there are many great manga with cliche plots but they make up for it by developing those cliches in some novel direction or by developing the typical character types to make them fresh and original. This series does neither. It just ropes you in with sex scenes and predictable cliffhangers.
Was this comment useful?  Yes

Edo Japan? Historical? WTF?!
by vivogram
April 5th, 2015, 2:25am
Rating: 9.0  / 10.0
This happened in some make belief time frame, place or alternate universe. The setting is not in Edo, and definitely not historical. They have goddamn hair tongs, maid cafes and a whole other bunch of modern day inventions.

Somewhat dark and at the same time so beautiful
by juls91
January 18th, 2014, 5:01pm
Rating: 10.0  / 10.0
The first time i read this it was not completely scanlated and i didn't feel it was that great (probably because at the time i wasn't that good at handling the angst)
But this time, in order to finish reading it, i gave it a try from the start and i think is a brilliant work, i loved every bits of it, even with the demons that keep on haunting them at the end, it's a beautiful work, with beautiful characters (and i don't just mean their looks).

The story is indeed bittersweet but that makes it beautiful. As for the pacing, I think it's alright for the characters' developments and emotions needed to be built and established in unhurried passion, with the tensions and atmosphere to add depth to the story. TBH, I had this on hold for years until today...I read this in one go. The super feminine art style used to turned me off in the past. Guess it's worth it when one's feels like it reading it. Overall, it's a great read. Umm, the ending left me wanting for more though. Another omake or dj would be desirable.

Might as well have been shorter
by yarn
June 23rd, 2013, 11:58pm
Rating: 6.0  / 10.0
The art's very pretty and all, and the premise is unusual, but the plot and characters felt kind of vapid. Guy A and Guy B like each other, aren't allowed to, so A is tsundere all the time (and claims he doesn't like B) and avoids taking customers, and B keeps getting injured. They end up living happily ever after. I feel this could have just as well been a 1-volume story, instead of 3, considering that not much happened. I ended up skimming through the last several chapters because I was getting bored and just wanted it to finish already.

Beautiful and Bittersweet
by Cassandra08
June 7th, 2013, 5:03am
Rating: 10.0  / 10.0
I found this yaoi absolutely beautiful both in terms of the art and the plot. The author and artist very effectively use art and dialogue to express the emotions of the characters and the bittersweet situation they are in. I never personally found the seme too girly, and I don't understand why other reveiwers have had issues with liking a seme who has bottomed: I thought this only added to the beauty of the plot, especially seeing the uke's reaction to this.

Although the uke is very 'girly' (I prefer to think of him as being beautiful and feminine rather than girly) I also never had an issue with this or even considered his personality annoying whereas normally I hate girly ukes! I don't know why that is, although maybe because the rest of the art was so beautiful I unconsciously accepted this (in other manga's where the uke is the only beautifully drawn character I think this tends to stick out more). I also think that his personality was not unnecessarily feminine: to make the plot work, this personality for him was effective. Although loved the seme more (I thought he was a very well developed character) I still enjoyed the uke and the conflict between the two originally.

The whole plot of this manga appealed to me and I loved it. Bittersweet, beautiful art, tastefully done, well developed characters... what more do you want? Definitely going on my favourites, I even cried at moments.

Even if you don't like feminine ukes, then at least try it out and come to your own decision after reading it! You will be blown away.
Was this comment useful?  Yes

seme lost his virginity?
by thuyai92
April 27th, 2013, 1:59pm
Rating: N/A
love the art but hate the plot. I really can't imagine and stand that seme was held by other men. Thought that my prince was violented in the ass driving me crazy. I hate seke, hate that story.
Was this comment useful?  Yes

Suprised as well...
by Nyokichan
February 28th, 2013, 8:38pm
Rating: 9.0  / 10.0
Looking at the cover and the setting I thought, "Oh another historical tale of tragic prostitutes who love each other and will only be able to really be together from afar or in death..." But it actually didn't turn out that badly although after the back story I thought I hope they get away before they have to sleep with customers...how sad to be in love with a fellow prostitute and only be able to see each other after having spent the day sleeping with strangers. The seme was really fem at the beginning but it got much better. I can't help hoping the uke will begin to look a little more masculine as the story goes on as well.
Was this comment useful?  Yes

Overrated
by ladylazarus
January 13th, 2013, 1:11pm
Rating: 7.0  / 10.0
The story is good and the premise is interesting but the characters are seriously lacking in personality. You have the typical crybaby uke and pokerface seme. Kichou is the man and Kagerou is the woman, not only in the uke/seme way but in every aspect of their personalities. So you also have the shoujo archetypes of "distant but possesive" male lead and "weak indecisive" female lead.

Spoiler (mouse over to view)
Even after they become free Kichou dresses as a man but Kagerou remains with long hair and dressing as a woman.

If I wanted to read a menxwoman romance I would stick with shoujo, but that's just me...

I recommend this to people who aren't used to BL and enjoy a bit of light S&M.
Was this comment useful?  Yes