Login to add items to your list, keep track of your progress, and rate series!
Description
Yuuya, a high school student, unexpectedly bumps into Kiriya-san while walking down the street and ends up saving the older man's life. The two are neither "friends nor lovers," but form a companionship in order to listen to each other's troubles. Will this friendship turn into love? 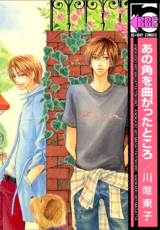 User Comments  [ Order by time added ]
You must login to comment for this series! Register an account.

Loveleh
by xbelovedx
December 30th, 2007, 10:42am
Rating: 10.0  / 10.0
This is a favorite of mine. Of course, I love all of Toko Kawai's works, but I like this one the best. Not only are the two main males not stereotypical ukes and semes (well, for the most part) but there is an actual storyline behind this yaoi. It's not just 20 excuses to have hot smex, but don't worry, it still has its steamy moments.
Was this comment useful?  Yes

Meh
by vkoi
September 13th, 2009, 12:48am
Rating: N/A
Ok, this is better than 90% of yaoi manga out there, but given the ridiculous amount of trash/excrement that pervades the genre, that's not particularly high praise.

Ano Kado wo Magatta Tokoro does portray a realistic relationship with fairly well rounded characters. There's no rape or ridiculously femmy uke. The arts not really my thing, but it's decent, and there are a couple of hot sex scenes. Mostly, the manga just drags. There's a whole lot of Yuuya moping around being jealous while other people glom all over Kiriya. If half of these scenes were cut and replaced with scenes that deepened or expanded the characters, my rating would be at least 2 points higher. It's also strange that for the amount of time that the two main characters spend apart, their other friendships aren't touched upon at all.

Spoiler (highlight to view)
What the heck's up with Yuuya's friend? The dude who just pops up during those interminable, several-page scenes featuring Yuuya's insecure and jealous facial contortions to say stuff like: "You seem depressed today." "You seem different lately." "Wanna get some food?" And inevitably Yuuya blows him off. Seriously, who'd continue following Yuuya around? The narration of Yuuya's inner state, perfectly evident on his face, is just annoying. Phew! Glad I got that off my chest.

All in all, if you're craving some decent yaoi and you've tried most things out there, give Ano Kado & etc. a read; it's not bad. But it's nothing to get excited over, either.
Was this comment useful?  Yes

actually, i have no idea why this is one of my FAVOURITES. lots of manga have the qualities i've mentioned. but this one just has a certain charm to it that i can't put into words.

OMG, Amazing
by sofistree
August 22nd, 2011, 1:06pm
Rating: 10.0  / 10.0
First, whoever translated this (at least a few of the chapters) is awesome. Sometime I forgot it was a translation - it sounded very nearly like normal English! (With stuff like, "No shit, Sherlock!" in there). I almost never had to slog through awkward sentences! I think I love this translator. <3

The art is great, the story is interesting, the uke isn't scared of sex and the seme isn't freakishly possessive. An A+ in my book!

The story is great. It's been done, but not done so well! The two main guys' personalities play well off each other, and they have really good chemistry. It's kind of cute when the seme says he'll win the uke over, and the uke says to give it a shot but that he won't help. It's cute because they've already fallen for each other, and now it's just kind of a flirty game of catching up to that fact. Again, it has a lot of common cliches, but it's handled in a way that makes it readable and fun.

Kind of depressing...
by Naokiyukimura
July 9th, 2010, 11:22pm
Rating: N/A
While I'm a big fan of Kawai-sensei's work, I've never been one for teacher-student relationships - although I tend to make an exception for my favorite artists, this one I will have to pass on.

Don't get me wrong, it's a good story, and if you like that kind of relationship then its probably something you should really try reading - however, what got me was how the story changes almost drastically from the first chapter or two. It seems to start out as an older-younger guy relationship in a normal (non-school) setting. I liked that part, but it suddenly jumps almost too quickly into the student-teacher thing without warning.

Plus the relationship seemed to take a 180 overnight, from "I love you" to "they don't know each other". Add to the mix in that somewhere along the line they get caught in school grounds together, and that makes the last half more then slightly depressing. Since I'm not a fan of couple who spend most of the book forcefully separated (in some way), this hits a sour note with me.

In my opinion, the book seems to drag it out, although well written, I couldn't connect with the story. Plus, I still think the last half of the book was a bit too depressing for my tastes (and I'm not going into the legal technicalities that the teacher got himself into). That kind of thing gives me a headache, so I'm staying away from this one.

The book gets a 5, since I like Kawai-sensei's artwork, but I can't recommend this one out of all the others she's published. I'll say it again, if you like the teacher-student thing, then give it a go, otherwise keep looking elsewhere.

Pretty good
by prettykitty20034
September 28th, 2009, 10:36am
Rating: 8.0  / 10.0
Student/teacher romances are a dime a dozen in yaoi-land. This is by far one of the best written though. The characters don't fall into cliche stereotypes and the drama is present in small doses. I found it to be a more understated romance. While Toko Kawai's art is not my fav, I do like that she avoids the blushing girly-boy style. While the charcters *are* pretty, they still look masculine.
Was this comment useful?  Yes

the best!
by marigam
July 11th, 2009, 8:30pm
Rating: 10.0  / 10.0
There's no stupid ever-blushing uke! None of that forced sex nonsense! There is just heartfelt perfection! It strummed all the right strings, made me laugh and go "aww" and had the right amount of sex.
the very nice ending left me very happy but of course as with any good story wanting many more chapters!
i guess ill just have to satisfy myself by finding all her other works and reading them obsessively
Was this comment useful?  Yes

One of the best reads
by xx-Touya-xx
May 2nd, 2013, 9:11pm
Rating: 10.0  / 10.0
If you're sick of those guy meets guy = sex stories then this one is a must read! The characters are unique, quite comical and they have an ATTITUDE which is really rare in most stories. The seme and uke don't succumb to physical "AhEm" but rather they try to convey their feelings to each other. This is a really well-thought out manga despite it being so short. I don't give out a lot of 10's but this one is definitely a 10.
Was this comment useful?  Yes

Best student-teacher story
by jellaaay
December 1st, 2010, 11:08am
Rating: 10.0  / 10.0
I just love this manga. The plot practically blew me away along with the art. In this story we could actually see the vulnerability of "Sensei". Unlike typical student-teacher relationships manga goes, where the sensei's mostly the one who's the got the upper hand..confident..no fear. In here, especially in the last chapter where Sensei cried saying how he'd lose himself in this love..I think that was such a fear so close to reality. I mean, usually they would say "of course I'll wait" but deep inside they feel otherwise.. So i'm glad the mangaka conveyed what Sensei honnestly felt. After reading this story, I read all of her works. No regrets. I would read this so many times over and over and I usually dont re-read stories.