Login to add items to your list, keep track of your progress, and rate series!
Description
From StarryHeaven:

A bittersweet story about the life of Kojima Ari and Fujitani Sousuke as they live together in a de facto relationship (without marriage) in modern-day Japan.

But will the choices and mistakes they make bring them together or tear them apart? 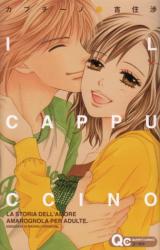 The atmosphere
by Ah_Cat
September 20th, 2015, 5:33am
Rating: 6.0  / 10.0
I like the story in a way the plot seems realistic but the author didn't make me feel like their words are real. This work doesn't have a soul if you know what I mean. It's impossible for me to like the characters because the things they do doesn't look like mistakes that they will learn from but just stupid actions. Their purposes and characters aren't believable.
Spoiler (mouse over to view)
Personally, I would never let my boyfriend cheat on me and do nothing once I get to know about it. I know that some women are so afraid to lose the person they're with that they will stay in this kind of relationship but I think the author just didn't show it very well. There were some good sentences, like the fact that she started to 'hate both him and herself for it' but that was just words, I didn't buy it at all.
And the boy, Sousuke... I can't even begin to tell how much of an idiot he is. And the worst part I think is when he said to his friend that he could show some compassion because he is in a tough situation. Seriously? What a jerk, brought it all on himself and didn't really give it a though on how he was hurting everybody around.
The high school girl is a type I hate the most. An enemy for every woman, taking somebody's men on purpouse.
The only really good thing was the heroine choice at the end. Although the plot was interesting and though, I would like it very much if the characters were better described. They just 'didn't have a soul' for me and I coundn't get into their situation because of that.

Go to HELL
by kagayaki_kaya
July 30th, 2015, 8:59am
Rating: 6.0  / 10.0
What the fuck with the Hero?
Spoiler (mouse over to view)
He promised to marry someone but the other side like he had forgotten that fact!
Easily be manipulated by chick. OMG how can i have the patience with that guy?
If it really happens to me, not in any mind i will forgive him.
Just go away with that chick and let me free.
:'( i feel so sorry for the heroine.

The story maybe come true in reality. But not my thing in the story. Got story which went the separate conclusion ending is the worst.
Was this comment useful?  Yes

...
by ms_hei22
June 26th, 2014, 2:45am
Rating: 8.0  / 10.0
this story actually made an impact on me.
Spoiler (mouse over to view)
The guy actually had the guts to cheat on her after promising to marry her one day. And the other girl too, I hate her! What a b**ch! She keeps on clinging to the guy even though she knew he already had a girlfriend.
The lead girl was a naive one but I actually like her. She was hurt but overcame it by herself, she became strong. I really thought she'd went back to the guy but good thing she didn't.
This story could happen in real life that's why I kinda like it. It reminds me love is sometimes cruel afterall.
Was this comment useful?  Yes

More Bitter aftertaste than bittersweet.
by kitty1826x
August 29th, 2013, 5:41pm
Rating: 1.0  / 10.0
One of the few thing I've read that pissed me off to the point of ranting to others about how bad it is.
The beginning was fine, the middle ... the ending it should be one I'm happy with , but I'm not.
Spoiler (mouse over to view)
The male lead seemed like a great guy, and with a little bit of asking he's persuaded into cheating. Which how he even went to the length of telling the female lead's parents he'll marry her one day. It seems out of character and forced. I normally wouldn't want the guy who cheated on his girlfriend to get back together/stay with her , but it seemed like he genuinely realized he made a mistake, and willing to do everything to make her happy for the rest of her life.
Bitter. It really left a nasty aftertaste. I would NOT recommend this to anyone to read.
Was this comment useful?  Yes

*sigh*
by ScytheMaster14
March 17th, 2013, 6:17pm
Rating: N/A
i've got to admit, i had high expectations for this cause people were saying its "real romance" and for the first few chapters it was fine and dandy, but it just went downhill for me.
Spoiler (mouse over to view)
the guy has no commitment he's just like "its fine like this so just a little longer" NO DUDE YOU PROMISED TO FREAKIN MARRY THE GIRL AND YOU GET SO EASILY SWAYED INTO CHEATING.
i know people are saying its more realistic because of the ending but honestly i thought the characters were all cliche except the main girl. it either bored me to death or just plain pissed me off.
Spoiler (mouse over to view)
and the developments into a love triangle seemed super forced, i thought for once there wouldn't be one because the guy had a girlfriend, but nope. he's even a total jerk to her in my opinion.
ultra maniac was my first manga and i still love it so i had really high expectations for this author. i guess im just a little let down.
Was this comment useful?  Yes

Realistic
by born2shop
February 6th, 2013, 5:51pm
Rating: 8.0  / 10.0
The story was nice... though it did leave me torn. The art was also really pretty and I have to admit that though I hesitated, I'm glad I read this.
Spoiler (mouse over to view)
I hated that girl for being so persistent though she knew he had a girl and he's already rejected her before. But at the same time I hated Sousuke for being so weak and giving in to her just because he didn't want to see her cry. I shouldn't have mattered if she cried or not, she's not his girl. But I was happy/sad that Ari made the decision to end the relationship that was causing her so much pain. I can't say that I didn't want them to get back together... I did but then I'm glad she moved on with her life as well.
Was this comment useful?  Yes

lol
by ddeceive
August 17th, 2012, 6:03pm
Rating: 10.0  / 10.0
Sometimes love doesn't know what dignity means.
Spoiler (mouse over to view)
But The main character made the right decision in the end.
Was this comment useful?  Yes

aghhhh
by sara..
June 2nd, 2012, 3:20am
Rating: 1.0  / 10.0
what reality !! come on people !!!! does a guy cheating on his gf says aaah just a little more and just by saying oh sorry I cheated on you girl the gf forgive him over one night is reality ?? seriously ??
if that's your reality then excuse me for saying that but you live in a world with no dignity
Was this comment useful?  Yes

At first, I thought that both Sousuke and Ari were ridiculously immature in the relationship until I realized that these are certainly possible choices that anyone would make. I noticed that while the decisions were logically awful, I can see why he or she makes such a decision. Moreover, the decisions were surprisingly "normal" and realistic. I would've liked to see more of each character's motivation behind their action, but the mangaka put a sufficient amount for the reader to infer the thought process.

In the end, my suspicions on what would happen were confirmed, but the mangaka wrapped up the story in a pretty decent way, even if it's obviously not a new idea. It helps that this story was just one volume - no extra frills. In my opinion, a good short story will only have crucial elements for the story to BE a story, and I would say that Cappuccino has exactly that. While this certainly wasn't epic, I did enjoy Cappuccino a lot.
Was this comment useful?  Yes