Login to add items to your list, keep track of your progress, and rate series!
Description
Cys Buegette learns of the sudden death of his brother he didn't see for 10 years. His only legacy: a disk and a son, Kai. Kai now lives with Cys and every night, comes to his bed. 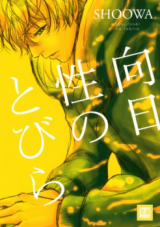 Beautiful art but disappointing plot.
by elbereth.elentari
November 28th, 2017, 6:53pm
Rating: N/A
I really liked the art but the plot was extremely disappointing. While there are plenty of yaoi mangas which have no plot at all, this one was actually going somewhere very interesting. Medner's research, his, Cys's and Kai's past, the conflict with the CIA... there was a lot of potential there. And then suddenly, when Cys and Kai meet again everything just grinds to a halt. No resolution of the plotlines whatsoever.
Was this comment useful?  Yes

Exciting
by hotarusasaki
October 4th, 2014, 7:07pm
Rating: N/A
The relationship between Cys and Kai was very interesting to read about and also got me very excited. I wish the stories pace could have slowed down a little and some parts was a bit confusing but the author clarified it in the end which was nice! I loved the darkness in Kai even though he's so innocent and loving at heart. And the characters were all quirky and great! Lovely!
Was this comment useful?  Yes

I liked
by attaesc
August 24th, 2014, 6:26pm
Rating: 10.0  / 10.0
It's a bit confusing, especially since I was sometimes unsure of the sequence of images and also to whom the text bubbles belonged (when the little lines were missing it was difficult so I judged on the mouth, which wasn't much help).

Art is very good, better than her other works. It's cleaner. Sexy as hell.
Was this comment useful?  Yes

It had potential
by Lilith_Lancaster
June 1st, 2013, 9:55am
Rating: N/A
The first 2 chapters were so hot, about a perverted old man and a cute kid.

Then it went downhill with the CIA-memory-past plot. Why? Because the author tried to squash too much information in limited time. Though I gotta admit, it made me on edge wanting to know what the hell is going on.

So nine.
by MirayAllen
February 18th, 2013, 5:52pm
Rating: 9.0  / 10.0
I am in love with Shoowa-sensei's art style. When I started reading Non Tea Room I thought it too sketchy for my liking and perhaps not as much detailed as I would have it. However, by the end of the first chapter, and now here, I'm utterly convinced. Did it grow on me? I'm not sure, perhaps I just did fall in love with it.

Now for KnT, one immediate complain: it should have definitely been longer. It was simply too much information to grasp from a 6-chaptered volume and one can only understand so much. I loved the concept and of course it kept me on edge right from the beginning, desperately aching for more, but part of that happening was due to my endless confusion and frustration. Like someone here already pointed out, there was a part of me that couldn't stop on her feet until I was done with the whole thing: I just wanted closure and hopefully some sense. Ahah.

But overall, of course, it was definitely worthy. The characters were very well developed, most of them reliable, even likeable, and I daresay realistic to some extent. Of course I'm still waiting for someone to pop out of nowhere and tell me Kai's real age, ahah. Oh, oh. And the European setting was so refreshing, it felt like home <3

It was a great experience nonetheless, totally recommend it, and I can't wait to read more of this artist's work.

EDIT: Oh my God, who else cried "Matt and Mello" at Mari's first "real" appearance with Jin? No one? Of course, neither did I. Ah...ah.

Beautiful
by shininghero16
July 12th, 2012, 5:35pm
Rating: 10.0  / 10.0
Just......beautiful. It's hard to come by stories that are breathtaking story wise. This one just had the whole package. Beautiful drawings and a compelling story. The characters all have likeable personalities and the romance really spoke for itself. I've read this story more than once and I wouldn't think twice about reading it again, for surely, this story willl never get old to me.

One of my Favs
by Dezi
June 26th, 2012, 12:12pm
Rating: 10.0  / 10.0
This one's definitely one of my very favorite BL manga. It has twists and turns and can really take you by surprise (in case you didn't stumble upon any spoilers). It has great character depth and an unique plot. I have read it several times already and it never got boring. Shoowa's art is - as in all of the manga I've read by this artist so far - very beautiful. I definitely recommend this one.
Was this comment useful?  Yes

clumsy but sweet
by tekiteki
May 10th, 2012, 3:46pm
Rating: 8.0  / 10.0
Ok, several changes of frames made my eyebrow to raise in confusion. Also, for me, yaoi scenes looked clumsy and even unnecessary (as if there was a plan to put some yaoi in this manga). And I think, in the middle of the manga a poor villain was too enthusiastic explaining nearly Everything, every mystery to the main hero, it was strange ^^.
But, after all, the art is nice, and the manga is sweet). I don't think I would reread it, but I can still recommend it to yaoi fans. Also, after reading it, I want to check other works by this artist ^^

interesting
by whitespade
April 10th, 2012, 4:53am
Rating: 8.4  / 10.0
i really like this whole convoluted plot. im a very simple thinker i like to read simple things and initially the plot is confusing. that is because i do not analyse the words i read. however by the end of the manga i pretty much understand most of them, so i am quite happy that the mangaka take the time to explain the plot.

i like the characters, kai is very cute! the dirty old man is not bad either lol. the art is nice and i like the way the panels seem to be crowded but i dont get lost at all due to the simplistic, clean lines. the characters are not very differentiated between each other though, so a larger cast may put a strain on my mind.

all in all, a good read.
Was this comment useful?  Yes

It needs more sex!
by cl4v
March 13th, 2012, 4:02pm
Rating: 8.0  / 10.0
Spoiler (mouse over to view)
An 8 it's OK, it was kind of of unbelievable: 17 year-old CIA agent, Two young brothers, one as a CIA agent, the other as an elite scientist... but for being a yaoi manga, it's forgivable. What i cant forgive is the sexless scenes, one of the two was pretty hot though. The explanations given by the four-eyes agent about their true background got me more confused than i was already! But that maybe due to translation. At least, you want to finish the manga to know what the hell it's going on, that means you're interested.
Was this comment useful?  Yes