Login to add items to your list, keep track of your progress, and rate series!
Description
One day, Daichi Katsuragi and his classmates suddenly found themselves in a Parallel world. The god who transferred them to this world shared his power, and told Daichi and others that they were heroes and he wanted them to defeat the demon king. But only Daichi didn’t get any power. As expected, useless Daichi is used as a decoy and abandoned in the monsters den. 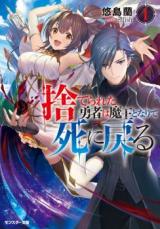 Strange
by morphin007
August 19th, 2015, 3:24am
Rating: 6.0  / 10.0
The setting is pretty common, the story advance at a good pace but I have a strange feeling about the story.
First it seems all character are dangerous psychopaths and at the same they seems normal... The relationship between Shuri is completly obsessive with no real reason (and everyone wonder why), they kill ruthlessly, without mercy and in sadistic ways....
I don't find him very hero-like, even from the monster point of vue... He is more like just a normal villain than a hero for the bad side.
(if it was reversed, it'll be like a demon joining humans because another demon trated him like trash and killed him. Then going everywhere to torture his old demon's mate while recruiting some. You think that's a hero for humans ?)

Possibly the least effort pit into the *otakus class transported to fantasy word where he gets betrayed and becomes Op for revenge*
by saacool
August 9th, 2015, 5:03pm
Rating: 2.0  / 10.0
Compared to any other work of the same genre its just... Boring. 0 exposition, character relationships are unbelievable, character traits are forced. Mc becomes way too overpowered way too quickly.
It honestly reads like a fanfiction. Maybe my impression will improve over the next few volumes
Was this comment useful?  Yes

Great alternative to Arifureta that focuses more on romance.
by tameflame
June 27th, 2015, 2:29pm
Rating: 7.8  / 10.0
The action however, doesnt come close. But the potential is there, though the author doesnt look like he can write epic battles like arifureta's.

There is a lot of romance and character driven storytelling, which makes this an interestingly paced work with a strong sense of direction.

Better than tate no yuusha but not as good as arifureta.
Was this comment useful?  Yes

It's good. Not great, but good.
by bobIV123
May 9th, 2015, 12:42am
Rating: 8.0  / 10.0
I found it enjoyable to read, and for some reason it reminds me of Hai to Gensou no Grimgal though I'm not really sure why. There are some minor things that don't make sense with the MC's abilities, and it seems like he has a very abrupt, radical personality change which could be forgiven as he was "used as a decoy" but even so, it's like he's an entirely different person. The combat's nothing special so far (early vol. 2) and the characters aren't super likable or super interesting. It's ok if you're looking for something to read and you like Arifureta or Tate no Yuusha no Nariagari.
Was this comment useful?  Yes

Nothing is perfect
by bakaleaf
March 18th, 2015, 7:30am
Rating: 9.3  / 10.0
At first I thought it was a so-so kind of thing
after reading Volume 1 and 2 I realize a unique way of approach from the story
Some might compare it from arifureta but they are not the same
while the mc arifureta was betray and abandon that was just a scheme by a single person.
here in suterareta all his classmate abandon him even the lead female character also abandon him.
His whole classmate sacrifice him he has no allies from the very beginning.
Does his twisted and hatred towards humanity is justified.
The existence of the two goddess of both good and evil is not unique but adding one in a harem is a must.
So far I am satisfied by the harem theme I was annoyed lately reading a lot with harem genre only to realize there was no harem and if there is harem the females characters are so bad its not worth reading.
This story has an epic twist of revenge and betrayal. The romance is not perfect but its almost there.
The MC is not OP after all his unique skill make him die and resurrect after. In other with MC dying is a must. But its not a bad thing while we see a weak MC we can still say the MC is strong.
I have little say about the plot but so far is keep up with the pace and make you think its interesting.
Its not perfect I still have to see something that completely not there.
But over all its a good story one where you well realize that its ok to hate humanity.
Was this comment useful?  Yes

Walking a tightrope.
by drunkguy
January 13th, 2015, 2:08pm
Rating: 8.0  / 10.0
The series is doing a difficult balancing act of making the MC powerful without making him too OP; vengeful but not completely unjust. So far, it is actually handling it well enough.

Spoiler (mouse over to view)
He tortures and kills those he feels wronged by and spares those who he deems innocent. It is nice to see he isn't merciful depending on gender.

Most of the story is focused on dungeon crawls and the majority of the students are wimps similar to those Arifureta. While talented compared to the rest of the populous, they are trash compared to the MC.
Was this comment useful?  Yes

Arifureta x master of monsters
by MinM66
December 23rd, 2014, 3:20am
Rating: N/A
If you have read both of those then you will agree they share some similarities, however, I felt this would take a darker approach to it and thought it might be good in its own way... but then it did a 180 and just became.... meh

Spoiler (mouse over to view)
During the first volume you start to think it will have a darker tone, with a sinister protagonist, but once the second volume begins it completely flipflops, I'll re-edit this if that is not the case but if it is I may just not read it and just read the aforementioned. For example their entire goal is to leave the dungeon and kill the guy that abandoned them that took up the offer of Clara (or whatever goddess name is)..... and then they don't care.
Was this comment useful?  Yes

God... WHY!
by rhin33
November 25th, 2014, 11:07am
Rating: N/A
Honestly I don`t have the tiniest idea why I still bother with this type of wish-fulfillment crap -.-
As fr SUnE - same damn idea recycled for the n time. Well at least
Spoiler (mouse over to view)
the twist of him being the demon`s hero is a new variation to the know formula but not enough considering how bad the starting setting is.
Wouldn`t bother to continue reading it
Was this comment useful?  Yes

I know its similar to Arifureta but...
by archknight
November 25th, 2014, 8:53am
Rating: 9.0  / 10.0
So far his goal makes way more sense than the guy in that. I will still enjoy reading both as its interesting to see what the characters do with their crazy OP skills. Soon the story will start to drift in different direction because the MC in this series wants something different than the one in Arifureta. So it will be interesting to see where that leads him.
Was this comment useful?  Yes

Eh....
by loztcause
November 24th, 2014, 7:46pm
Rating: N/A
The beginning looks like a bad rip off of Arifureta.... That aside, it seems okay. I don't really care for the whole infinite revival thing though. I probably won't read more of it for a couple reasons.
Was this comment useful?  Yes