Login to add items to your list, keep track of your progress, and rate series!
Description
Naofumi Iwatani, an uncharismatic Otaku who spends his days on games and manga, suddenly finds himself summoned to a parallel universe! He discovers he is one of four heroes equipped with legendary weapons and tasked with saving the world from its prophesied destruction. As the Shield Hero, the weakest of the heroes, all is not as it seems. Naofumi is soon alone, penniless, and betrayed. With no one to turn to, and nowhere to run, he is left with only his shield. Now, Naofumi must rise to become the legendary Shield Hero and save the world! 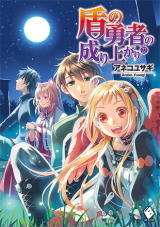 Note: You must be logged in to update information on this page.
Forum Posts Click to view the forum
I m looking for tate no yuusha novel which ch to read
over 4 years ago
About status of this Novel
over 8 years ago

Strong start, some good moments from time to time, but too much repetitive grind
by QuasarX
August 22nd, 2021, 6:28pm
Rating: N/A
There are some really cool plot points, mostly in the beginning of the series, but the problem is that after a while, the heroes have to defeat one nemesis after another that all feel like carbon copies of each other. There is an in-world explanation for this, and even in the main character's mind, they blend together and he just thinks of the new enemies as essentially repeats of the old enemies. From my perspective as a reader, this made it feel like the heroes were just repeating the same struggle again and again, novel after novel, until I got so bored that I just couldn't motivate myself to keep reading anymore.
Was this comment useful?  Yes

Dissapointing
by PZcolo
September 9th, 2017, 10:19pm
Rating: 4.0  / 10.0
Had almost an essay written about all the things that enervated me about this novel, ended up loosing it and was too long all the same. To put it shortly, I was disgusted at the main character, a pathetic whiner that's all the time complaining or going on how unfair the world is and on the other hand going as far as
Spoiler (mouse over to view)
stopping the princess to commit suicide to have her sent to the be rapped, tortured and killed because poor little me (him) had suffered
After that I read a little more but that was the turning point, I can accept many things of a mc, but that disgusted me profoundly and as @Kuranz says it's hard to sympathize with such an MC. I was also annoyed with the use of cliches that start to abound midway in the story and the harem crap.
It had had it's high and lows till that point, so I was disappointed how the story was turning out, and it became more crap than good, when the manga finishes I might read that but this one is dropped.

Good beginning, mixed bag for the rest
by tzeneth
September 20th, 2016, 12:55am
Rating: 8.0  / 10.0
The setup, story progression, and characters seem interesting in the beginning. As the story progresses, that changes. For context: I have read the currently available translated novels and almost all of the translated web novel.

The story after the "kidnapped princess" arc is when I felt the story lost its strength. From there the story develops in weird ways and reveals the almost charicature nature of the other heroes which seems to have been hidden from lack of real interaction beforehand. From there the story starts shifting directions by no longer being about the waves and now it's about fighting super creatures. Strewn throughout are arcs that are completely unrelated to this and will either work or fall flat for you. I still can't understand the point of the mad scientist arc and it feels like one of the greatest wastes of my time as a reader.

Worth a read for the beginning, only stay if you're really interested and consider skimming on the arcs you don't care about at all.
Was this comment useful?  Yes

Disappointing middle, and ending
by MondoX
June 21st, 2016, 1:29am
Rating: N/A
The story started off strong with the way the MC was screwed over, and how it turned the MC from a happy, and carefree person, to a cold individual. The set-up for revenge was perfect, I was anticipating his revenge, and I keep waiting, and waiting... His revenge never really came, because of some circumstances it can be noted that it did, but I do not count that has revenge. It became so bad, that the MC worked with, or under the people that screwed him over, afterwards.
Was this comment useful?  Yes

History Progression Stuck
by h4cko
September 15th, 2015, 3:50pm
Rating: 6.0  / 10.0
In the beginning the history is quite nice, MC is falsely accused has to overcome a lot of difficulties, recruit some members/slaves travel and develop their level BUT most of skills/shields he acquire are useless since never MC never uses them, so it was a waste of text displaying them all, also the history progression SUCK ! At a certain point I was just speed reading since the chapters were not relevant at all. I recommend reading Mushoku Tensei instead of this one. Just dropped at volume 6.
Was this comment useful?  Yes

Good but could have been better.. Still was a good read
by dremondtanic
September 9th, 2015, 1:09am
Rating: 7.0  / 10.0
everything has already been said so i will keep it short enough. I am typing this of the LT web comic version

Tate no yuusha deserve some attention, it has interesting character, good story development, some time it felt rush but a lot of noticble Rush was at the end of the story. They author truly broke the 3rd rule to make the character going beyond a hero capability.

Main story with the shield being the most, useless hero, and everyone looked down on him for the star with out giving him a chance. All first 4 characters are from alternate version of earth in a different tme.

The story at the end does show a good and happy ending but the after math kinda give you an wierd felling.... But they push it too much to the impossible. not my kind of ening byt still satisfying i guess.

Somewhat good
by morphin007
August 24th, 2015, 12:28am
Rating: 5.0  / 10.0
It's not a bad novel nor an excellent one.
How can I say, it's classical fantasy novel with a bit of harem-like.
My main dissappointement is about all the heroes, including the MC. First the MC doesn't have a greet personnality, ok, but a lot of times his action are contradictory to that, so his personnality seem more forced (maybe to look more human ?) than natural.
The other heroes are somehow in the same boat, forced personnality that seems not to be natural and are more here to make Naofumi shine than anything.
The story and the world is a bit generic but still well written and wonderful to explore. A sort of mix between MMO games and fantasy.
Was this comment useful?  Yes

It ended? My conclusion
by bakaleaf
June 14th, 2015, 8:31pm
Rating: 9.6  / 10.0
It is a good novel (One of those you can treasure)
There is some up and down but I can say regardless of the circumstances it is interesting
So many people claimed this and that others even call them self professional readers
seriously reading comments is really fun.

First of all this novel is not about betrayals seriously just because he was betrayed at first don't just jump to unknown conclusion.
To summarize it up this novel is about Gods toying with worlds, parallel world encounters and so on.
What I usually notice to most readers and there comments is they easy assume things and compare it to reality and level it to there own morality.
Seriously People this is called fiction stop comparing it to reality.

As for the Story it goes something like this

Spoiler (mouse over to view)
Various Heroes are supported from different world
There is no one world in this novel there are worlds and worlds
First the main Enemy is a bitch Goddess
And the heroes are not but tools that she plays with.
She summon Heroes from other world make this fight each other while she slowly absorb the power of the world. That is the reason as you read many bad and good heroes appeard.
The Hero of Shield was a rare existence among the toys of the bitch goddess
In the End the hero of shield became a god slayer and killed the bitch goddess

It was a great twist and turn the plots was also interesting
Just ignore the comments and be open minded
putting aside your self righteousness and morals.

Btw Chapter 376 made a short summary of the end of the story!

Some people failed to differ between shounen and seinen
that is why I find it funny how childish there comments are.

Spoiler (mouse over to view)
MC the Hero of Shield became a god slayer (Killer of Evil Gods like the bitch Goddess)
MC can leave a fragment of himself (like what the bitch goddess did leaving her fragment AKA the witch princess)
MC left his fragments in the fantasy world and got married same happened to his original world.

To all the haters and negative comments out there
You have all the right to say what you want to say
But to those who have yet to read
Just be open minded and avoid the bad habit when reading and comparing it to reality
Its called a Fiction for a reason.
Was this comment useful?  Yes

Enjoyable but....
by RoxFlowz
June 9th, 2015, 10:38pm
Rating: N/A
It really screwed up the pacing at some point. Things started going in circles and becoming repetitive, which caused all tension to be gone. Almost feels like two seperate people wrote the first and the second half. But as the manga and the LN go on their own route at some point I do have high hopes for those.
Was this comment useful?  Yes

Carebearfumi Strikes
by Murdath
May 9th, 2015, 5:21pm
Rating: 3.0  / 10.0
The author has no idea how to handle revenge, this attached to a main character that is supposed to be angry all the time makes this retarded.
The novel was fun until the rapth race ark, then it became a chore to read the following chapters.
Was this comment useful?  Yes