Login to add items to your list, keep track of your progress, and rate series!
Description
From September Scanlations:

Hirono Yuusa always believed he was special and destined for greatness–until tragedy struck in his final year of middle school. Now, jaded and disillusioned, he’s completely given up on ever trying to be anything more than ordinary. But when he starts to notice classmate Himekawa Ichigo struggling to do his best against all odds, he can’t help but want to cheer him on. 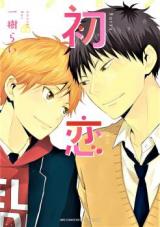 Masterpiece
by Fati1367
December 18th, 2021, 5:34am
Rating: 10.0  / 10.0
Masterpiece and actually deeper than it's look
I like how author mocking toxic behavior in public eyes as manly in subtle way
Being strong or hero nothing have to do with your appearance.
Was this comment useful?  Yes

Cross-dressing Hinata
by AstralRabbit
November 4th, 2020, 2:30pm
Rating: 7.0  / 10.0
"Hatsukoi" is a one volume yaoi, that could have easily used another two volumes to fully develop the various details of the setting it introduces. Because of it's blistering pace, it takes liberties in it's exposition, and as OmNom points out, it can feel a bit like a dump truck. It's certainly not normal for people to get over deep seated issues and change their minds as rapidly as is portrayed in this manga. But it is obviously necessary in this instance due to the constrained length.

Both MCs are quite well rounded, and do extend past the cliche that they appear to inhabit in the first chapter. The universally talented who is having effort issues, and the perpetually fired up midget who is as intellectually gifted as a rock. These are revealed to be products of the characters' circumstances though (e.g. the midget is more so uneducated/ignorant, rather than simply being dumb due to his upbringing), which adds dimensionality that can be missing from other characters in such short stories. They are immediately endearing, not requiring a wind-up period to become invested in. This lends the story immediacy in it's enjoyability, but also a rather shallow emotional profile. On the occasion the story does play with conflict between the MCs and their surroundings, it's usually resolved in less than a chapter. Readers need to stew a bit to really experience and come to know different tones!
Was this comment useful?  Yes

Hmm
by OmNom
September 29th, 2019, 1:18am
Rating: N/A
Overall this was a nice debut series from a very renowned author in the Haikyu doujinshi community, but as is the case with almost every debut out there, it's hardly perfect and could definitely use some tweaking in certain areas. The inner monologues/ flashbacks in particular were a bit too lengthy imo, they diluted the pacing of the story and tempered with the development of the characters. It felt like Hirono was staying in his head and wallowing in his somewhat theatrical angst a little bit too much, which sacrificed much needed screentime for more gradual and meaningful interactions between him and Himekawa in present day. Some of their dialogues were also rather dry, and I'm not a big fan of the tone the English translator from September Scanlations used for them - it made the characters sound unnecessarily vulgar and "hip" when they're actually much more wholesome than that. I guess I just wish there was more nuance in the emotional aspect of the manga as a whole.
Was this comment useful?  Yes

Nice
by Tentacle
September 18th, 2017, 12:41pm
Rating: 9.0  / 10.0
With this being Kazuki Rai's second original work I dare say that it's a bit distracting how much the characters remind me of Kageyama and Hinata. With that said, this manga is amazingly adorable and completely pulls you in! It's not too deep but has enough depth for the kind of story that it is.

Kazuki Rai has a very unique style both with her art and her storytelling and I do wish that she keeps drawing original works! (and hopefully they don't look as much like Kageyama and Hinata...)
Was this comment useful?  Yes

Refreshing
by kira6
September 17th, 2017, 6:15pm
Rating: N/A
I absolutely love the two main characters. One is great at everything he does and thus apathetic while the other never gives up despite how bad he is at something. You could say they are complete opposites
Spoiler (mouse over to view)
which leads to them having a physical fist fight to duke it out BUT then they actually communicated with each other afterward. And when the one dude said he just wanted to befriend the other dude. I was crying on the inside. FRIENDSHIP. Although the obstacle in the past was gotten over pretty easily by the latter character, I could see it would be part of his personality. It fit the not-too-dramatic vibe of the story too.
But there are more facets to their personalities than that. They both have their strengths and weaknesses. Neither of them exhibit the stereotype of cold, aloof seme or crybaby uke. The author managed to make a story that could have been cliche into something refreshing. I am refreshed. Dunked in ice cold water after running a marathon refreshed.
Was this comment useful?  Yes