Login to add items to your list, keep track of your progress, and rate series!
Description
From Shinnen:
It's the start of their senior year, and Shiika happens to be in the same class as a guy named Megumi. It's a mystery to her why his voice echoes through her mind. 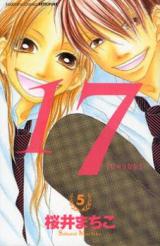 Note: You must be logged in to update information on this page.
Forum Posts Click to view the forum
raws for vol 5
over 10 years ago

Sad
by Bebe~
November 2nd, 2014, 12:05am
Rating: 6.0  / 10.0
I agree that it's tragic and dramatic but I don't mind it. I feel like the plot is s real; something like this plot happens in everyday lives. This manga pulls on my heartstrings. I don't find anyone stupid. Yes, Shiika cries a lot but she's not weak. She's strong because she attacks everything head on. I recommend everyone to give it a try. Artwork can get a little used to. It's different from regular shoujo mangas.

If it was written differently and they toned down the drama - I think I would enjoy it more as that would be more realistic. As is it now, I am not sure how it can end in a way which would be satisfying.
Was this comment useful?  Yes

juz maybe
by shiira.yuuki.187
April 4th, 2012, 5:31am
Rating: N/A
i'm still in chapter 1 and my instinct told me that something like this will happen
Shiika will developed a feeling for Megumi and I think Megumi has already have a feeling for Shiika as Akira often talks about Megumi to Shiika and vice versa.
which will cause lots of trouble since it's Shiika and Yuusuke are dating,
Yuusuke and Akira argue lots of time so they are in some kind of love-hate relationship
--
Akira like Megumi (i think)
--
Yuusuke developed some feelings for Akira
--
after some mishaps..
Shiika and Megumi become a couple
Yuusuke and Akira will become a couple
Was this comment useful?  Yes

It's okay
by jnatsumi
November 12th, 2011, 11:53am
Rating: N/A
The art is not that impressive. But it's good enough that I won't put it down just because of the art.
At first I thought it would be a cliche story, but it turned out to be somewhat deeper than that. I don't know if this will end up being a tragedy, resulting in heartbreak, or...a happy ending.
Psychological, too, I guess.
Was this comment useful?  Yes

Great
by RaeBabeeyx3
December 8th, 2010, 6:34am
Rating: 8.0  / 10.0
Great manga, a bit of tragedy which is not to my liking...
As always, I read only for the secondary characters haha akira and yuusuke.
They're similar and have a argue-fight relationship at the moment. Can't wait to see how they develop.
Was this comment useful?  Yes

The art is a bit disturbing sometimes as well, but it looks alright once you get used to it. I like the sketchy lines.
Art 7/10
Was this comment useful?  Yes

like it.
by goldenGAZE
October 12th, 2009, 5:48pm
Rating: N/A
@windshadow i agree, so far its seems to flow ok but i my tragedy senses are tingling lol, i think we still have a lot to learn about Megumi's past, probably a painful childhood since he always seems to be smiling but it's never sincere, and they're may be trouble between the 2 friends if they both end up liking the same guy. Anyways Shiika's boyfriend is a total jerk, i don't understand how a bf can be soo uncaring. He pissed me of. I like the lead girls character, yeah she does cry a bit but it's not annoying. You can understand her pain and what she's going through.
Was this comment useful?  Yes

looking forward to more
by windshadow
August 2nd, 2009, 12:10pm
Rating: N/A
I think i have a bit of a love-hate thing with this manga. I love how the story flows and how it's not going to be about your typical starry eyed girl. The art is decent. Sketchy, but it suits the story. A very casual afternoon feel to it that isnt too "magical encounter"-like.

But i can see a tragic episode coming up and somehow, i dont like that. The build up has shown that it might be of a huge scale (which if ends off too abruptly, will seriously make me hate this series).

Still, typical characters, though i do like the sleepy fella, he has a laid back feel to him that isnt too cool-kid-in-school. Totally random note but i think he's gonna die in the story. Okay, maybe not so random, the way he behaves is too philosophical for a average 17 year old boy.

Anyway, if done well, this could be a classic heartaching tale. Cant wait to find out how it ends !
Was this comment useful?  Yes