Login to add items to your list, keep track of your progress, and rate series!
Description
Kanau Yukimura is nine years old and she's meeting her father for the first time. However, he turns out to be an otaku! The two of them start living together in the same apartment, next to a lot of interesting neighbors. Unsurprisingly, things don't always go smoothly for these two... 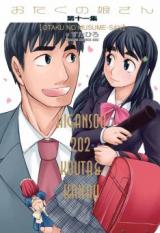 Note: You must be logged in to update information on this page.
Forum Posts Click to view the forum
the ending...
over 2 years ago
Is this manga already ended but missing 1 volume after ending.. wtf ??
over 5 years ago
Massive wtf!? Kouta, the damned.
over 8 years ago
WTF?! (*spoilers-ch55*)
over 10 years ago
We were just trolled. Hard. Ch58
over 11 years ago

Not worth your time
by loki266
September 26th, 2019, 11:51am
Rating: N/A
Seriously, just don't waste your time reading this as I did. At first, it's really an interesting manga, with somehow interesting and funny characters, but then I guess the author got bored and decided to implement the dumbest and
most random plot twists I've ever seen.
Was this comment useful?  Yes

Good Story of A Father and Child
by cecropiamoth
August 30th, 2017, 4:17pm
Rating: 9.0  / 10.0
They have to build a relationship because she comes to live with him out of the blue. And to make that work is a big struggle for both of them, especially her, because he's so odd. THAT is what this story is about. It's the emotional heart of the tale. And naturally there's lots of odd and funny behavior or the dad and his weird friends in the apartment house—all well written.

There's a surprise well along in the story which for some reason some reviewers here think is shocking. It's not. It's just odd. The tenor of the story changes after that, but it's still a very good story, especially as the father, who before was much more of a big kid than a father, has to grow up a bit.

Amazing
by wurtang
May 3rd, 2017, 7:11am
Rating: N/A
After read countless amounts of different genres of mangas with a plenty different demographic/audiences, this manga make the difference and I mean most of the kids are pissed off about the landlady and I just find that amazing plot twisting from the mangaka and wow the real background of the main plot was sick enough to make you feel miserable and destroy your hopes, The light on the end of the tunel never reach his heart at the moment and he was alone and destroy just his daughter be with him practically for pity(she loves him).


This is a story who make destroy your feelings giving you hope then crush them all without mercy, the background of the characters is amazing and the whole sensation you get is really different to me is one of the best stories I ever read and found so sad people can't understand the message behind the story which is really real(beyond the nonsense) "life can destroy you without mercy, just don't give up".
Was this comment useful?  Yes

Can't keep it up after a few volumes
by PZcolo
April 1st, 2017, 1:14pm
Rating: 5.5  / 10.0
Started good, liked the initial story and some chars but it gets wind-sided and is too long for it's own good, also, the comedy is kinda lame and doesn't take itself seriously and man it has some heavy stuff that ought to be taken seriously, also, there is only so much I can stand of otaku jokes, ended up fast reading the later chapters just to find the continuation to the main story which is pretty much lost midways and ended in quite a mediocre way in the last 6 chapters.

It had potential, but went downhill after the revelation
by SangMo
October 16th, 2016, 12:51pm
Rating: 1.0  / 10.0
Spoiler (mouse over to view)
That the young landlady was married to the old guy. The fact they spent so much time having the MC pin for her only to get torn down by the revelation that she as married to basically his sensei was terrible.

terribly disappointed
by Krimson
July 29th, 2014, 9:58am
Rating: 1.0  / 10.0
There is so much wrong with this manga. It begins decently enough and before you know it, there are weird twists and plot developments that make absolutely no sense. Until the ending chapters, I held out some hope for the mother character, but the mangaka went ahead and ruined that character too.

By the end of the manga, the author successfully mauled every character and made this work beyond redemption
Was this comment useful?  Yes

Spoiler (mouse over to view)
The Land lady and the Sensei thing was just yuck. No better words to describe it (it doesn't deserve even that).
It was bad for 3 reasons.
1] First, there was no fucking indication of that ANYWHERE in the manga up until that chapter. It was a literal Ass-Pull. There was nothing that even slightly indicated that those 2 were close in some special way, forget fucking married.
2] Second, an old man marrying a young girl. Now, in certain circumstances I wouldn't mind it much. But the one where he married the girl whom he brought up like his daughter? FUCK NO. That's just disgusting. The age is not the problem, it's the extreme violation of morals of having married someone who was like his daughter. That's just disgusting. Simply. Disgusting.
3] Third and what I was disturbed with the most. How the didn't even give a fuck about Kouta. That FUCKING sensei guy was LEADING HIM ON THE ENTIRE TIME. He was all like, "you have a tough hurdle ahead, bro". WHAT THE FUCK. You could've told him she was already involved or something or atleast that it was outright impossible! But no! You wanted to fucking lead the poor guy on and EVEN BEFORE he revealed everything, he actually went upto him and asked him if he liked her or not! You getting off on that?!
Even forgetting that part, AFTER they revealed everything and Kouta falls into depression AND THEY KNOW IT, they just keep flirting with each other. WTF. It's like they don't even give a shit about what happens to him and how it's all their fault!
So like I said, this manga was great. But after ch 43-44, it went to shit. Literally. No way around it.
I'll recommend anyone interested to read it till about ch 40. AND THEN JUST STOP. Don't even dare to read ahead.
Was this comment useful?  Yes

Why is parenting manga so hard
by Hell_Clues
December 8th, 2012, 6:26am
Rating: 6.0  / 10.0
Spoiler (mouse over to view)
Why can't anyone make a manga about a parent without it having a messed up element to it or screwing up what should be a very simple premise. I didn't read this expecting a love triangle or even a love story so there was no need to twist one in the first place(though covering dating while having a kid would be interesting). But even then, it was pretty obvious who it was towards, so it didn't need more twisting, at that point you're either breaking someone's necking or ripping it off.

And I'm all for doing the right thing but sometimes that's getting angry at bad behaviour, ill treatment, and unfairness. Instead of this manga wants people to be patsies, and I saw that coming too.

Aside from not telling him about his child(not ever planning to), she tries to sneakingly take her. but after such a knife twisting revelation told with no hint of even being sorry or repentance. All of this could be easily learned by her child that had gotten close to her father, and even though the child was also close to her mother in reality something like this might(and probably would) cause a rife at such crappy behaviour. But you just know it won't because this comic just picks and chooses when its going to be real and when its going to expect the audience to be stupid. Meanwhile her hardships were mostly because of her choices(though she did try to be a mother to her kids), and what she did had an insane negative impact on him and even blames him for her crap too, and even tries to push him into a horrible life. Yet he still managed to be better off(before she just marries rich) and at least have a steady job, and residence. But in terms of writing, I like her reaction towards the end and how that isn't instantly resolved. And that's basically the problem, it would take a whole other manga to resolve most of the things brought up.

In reality this would cause so many massive rifts even between the father and child, and this comic uses something too serious that it isn't equipped to deal with, and it does this repeatedly, and needlessly. I wrote in a forum post about the landlady's situation and how it made light of her bad upbringing too. The Mother(Nozomi) even puts all responsibility on a person that had nothing to do with her crap(Nitta). Despite being a semi-decent provider she gets away with awful things, and we're suppose to sympathize with her just because she's a mom? Even other characters seem to blame the loli guy despite him acting more decently than the lady. It's just insane. I'm not saying what she did isn't forgivable, it's that no one ever blames her even one bit in the first place.

It even ruins his relationship with his only possible love interest,and destroys his trust in women and (could have) potentially people as his best friend also betrayed him.

This manga is enjoyable enough when it was just about the daughter and father bonding. It's attempts to surpass that effort have a strange effect of working and working negatively. It's certainly memorable in an infamous way, and creates drama, but how necessary was that drama, and that drama is infuriating and not balanced.

The manga forces the guy to be good to the point that he can't express genuine emotion in a situation where it'd be perfectly acceptable and might be the only logical way to behave. It wants to have it both ways. And it's typical reaction comes of as disingenuous and weak.

Though his desire to be with his daughter is good, it's a little hard to believe she chose what she did. It doesn't feel fully explored but it's not vague or occult either.

The ending tries to be stereotypically sweet and the tone gets lighter but has the same mistake this series makes.

It ends on the nasty note that basically the same exact mistake gets made and it's treated like a light hearted nothing. There's the promise that things will be alright but it doesn't change the fact.

My score: evaluating this manga is difficult and confusing. My score is nuts. I think people who read these things will be better prepared than the first guys who got blindsided like we did. It's definitely flawed, I don't know if it should be commended for trying some stuff. It's hard to tell if the writing was incompetent or if the mangaka was being a magnificent bastard.

So funny
by JJTang
September 10th, 2012, 11:51pm
Rating: 8.0  / 10.0
Until Nozomi comes back. Would have been a 10 but author tried for some crazy srsbzns that felt so opposite of the tone set by the entire manga thus far, it felt really bad. Also, the ending is way too subtle, and teases way too much,
Was this comment useful?  Yes