Login to add items to your list, keep track of your progress, and rate series!
Description
1-3) The Youth Yearns for Love
Hiding the fact of being gay for years, high school student Kaede has a thing for his friend, Okuda.

"I must never let him know about my feelings," decided Kaede deep down in his heart.

Where will this mixture of feelings lead to? 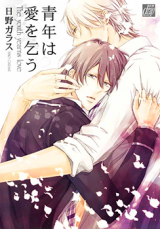 Deep
by Himitsu-chan
November 27th, 2015, 2:18pm
Rating: N/A
It's really engaging to read this, it tackled how hard it is to not to be able to be happy and free on your true gender orientation, it's sad that how many people suffer about this? I love the story it has deep and moving plot, hiding ugliness, insecurities and such. Well it's a happy ending so be it! Though i want to see the uke in the first story to cross dress, well i think the mangaka didn't do it because it will be a mock on the uke's feelings seeing how ugly he was (for him) when he puts make-up, but he's beautiful though even without it.
Was this comment useful?  Yes

Thought
by aeriselric
May 12th, 2015, 4:04pm
Rating: N/A
This manga makes me kind of sad. It makes me think about all those who have loved someone, watched them, cared for them, laughed with them, cried with them but never been able to say a word about how they feel. All those souls who could have been together because they love one another but never could. Those fears, self consious inadequacies, and worries about losing that someone special that make everything in life seem like nothing will go right. That its better to just dream of what could be then to try and say everything to make it a reality.
Was this comment useful?  Yes

Not bad
by OmNom
October 29th, 2013, 3:29pm
Rating: N/A
Although these stories aren't any where near extraordinary, somehow they still managed to take my moods relentlessly to a roller coaster ride. It could also be the emotional music score I was listening to while reading it that contributed to that, regardless I think I quite enjoyed what I read. And the art is really pretty as well, the chibis are just too cute. Too bad the cover art isn't as appealing. Overall I dare say I don't harbour any ill feelings towards the manga at all.
Was this comment useful?  Yes

Good Enough
by Serendipity_
June 2nd, 2013, 2:46pm
Rating: 8.0  / 10.0
The manga was a bit Unpolished and lacking in many areas. But that didn't necessairly make it bad, just nothing out of the ordinary.
I liked both stories, I wish they were longer though. That would definitly have improven the ratings.

Either way, it's a good manga to pass some time with.
Was this comment useful?  Yes

First story was good
by sallyen
May 29th, 2013, 2:49pm
Rating: 7.0  / 10.0
Enjoyed the first story especially the narrator. If it went much slower, less graphic (shounen-ai instead of yaoi) and less cheesy dialogues - it would have been perfect! I can't give it a perfect score, but it had so much potential!

I think the whole volume should have just explored the first couple. Unlike others, I didn't find it as predictable as many other BL stories. Still a decent read.
Was this comment useful?  Yes

No
by MirayAllen
May 28th, 2013, 9:49am
Rating: 3.0  / 10.0
To put it plainly: the plot is boring as hell, anyone even remotely familiar with BL could've had predicated everything that happened, the characters are not lovable, cute or even interesting, probably because character development is closer to none (it started out all right, with the whole make-up thing: didn't deliver). I don't know why would anyone read this and think the manga even as much as tries to address the psychological conflict of one's sexual orientation. Does it? Didn't notice. It's about a guy who seems to have pretty much accepted the fact that he's gay, seeing as he's been in love with his middle school pal for ages, and yet somehow becomes the queen of drama every time a girl talks to him. So which one is it? And then there's this other guy who turns out to be also gay-- or does he? Maybe he's just "normal" as the MC calls him, we don't really know. Apparently he has never made love to another man but he sure knows what to do when the time comes.

Either way, it's not worthy.
Was this comment useful?  Yes

Good
by Narufan1st
July 15th, 2012, 9:42am
Rating: 10.0  / 10.0
I actually really like it.in most yaoi the only thing that a problem is saying we can't we are both me or it's weird.but this one directly addresses the issue of being gay.it's refreshing to read
Overall its a refreshing read.
Was this comment useful?  Yes

Nothing special
by emeraldglass
October 28th, 2011, 1:54am
Rating: 7.0  / 10.0
The art is good but the story itself isn't very special, I feel like i've read it hundreds of times before. It's not very deep or angsty and it is a bit clichéd. The uke looks like he as a-cup breasts sometimes.
Was this comment useful?  Yes

Alright...
by MangomyTango
October 13th, 2011, 9:06pm
Rating: 10.0  / 10.0
The story in reality may seem extremely angsty, but it's actually not too deep or crazy. The first two chapters were deceiving, but after reading the whole volume (in chinese) it was quite settling and well, it fulfilled a happy ending, then it introduces another couple afterwards.
Was this comment useful?  Yes

Wells
by MangoLuve
August 23rd, 2011, 11:39pm
Rating: N/A
I feel this story was very well executed. It was one of the few mangas that address's guys dressing up as girls. I feel this aspect is not approached very much in yaoi manga and in the environment we are in there are many gay drag queens and so i felt this yaoi was quiet different even though the subject was only touched breifly.
Spoiler (mouse over to view)
I felt it was realistic when he first applied make up and was disgusted with himself. The way that he said he only did that was so he could have a mans love was touching and it showed that he was only attracted to these female things as that would lead him to have a man and all he wants is for a man to love him which is why he even wants to dress up in the first place.

Im enjoying this manga alot and i hope its updated sooner <333
Was this comment useful?  Yes