Login to add items to your list, keep track of your progress, and rate series!
Description
A heart throbbing, royal fantasy comic on the romance of Moo-young, a fierce beast who disguises as a puppy to gain love; and Hwa-yeon, a girl, who raises and trains a large puppy, oblivious to its real identity.


Status
in Country of Origin
88 Chapters + 32 Side Story (Complete) 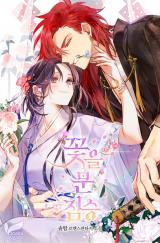 
Category Recommendations
Tai Zi, Ni Hao Tian
The Male Lead Is Mine
I Was Forced to Become the Princess of a Strange World?
Princess to the Rescue!
Emilone's Temptation Labyrinth

A great comedy... don't take it to seriously.
by theliongirl
February 28th, 2022, 12:20am
Rating: 8.4  / 10.0
The story started out great and has some unique points in its favor- alive, doting families, a sweet romance, you get to see a lot of the male lead's pov, etc. I really liked the female lead - some people mentioned that she was too oblivious but I think she reacted reasonably with the information she had. She's smart, and there were times she shone, it's just that she didn't realize the situation she was in because she brushed it off as too unrealistic (it's not even that she didn't think of it, because she did!).

The first half of the story was great, but in the second half some things that should have been explained and some events that took place were glossed over. Too much was introduced and fit into the second half, and it felt rushed. I haven't read the novel so I don't know how quickly the plot moved in it, but for the webtoon it felt like they had a set amount of chapters and because it was an adaptation they just crammed everything that happened in the novel into the last 30 chapters.

If you read this, just treat it as a romantic comedy and don't expect too much from the plot.

The main story left me a little unsatisfied, but there are two side stories and I really enjoyed the second one, so my feelings ended on a good note.

It's funny, I liked the main pair, the plot is kinda meh
by Daedalus679
January 9th, 2022, 1:53pm
Rating: 6.0  / 10.0
I did really like this for the most part. The comedy is good, dynamics and romance are great. Some characters are a bit meh. The main arc stumbles towards the end, it recovers at the end with a great emotional scene. There's a reincarnation plot after the main story that is pretty fun. I think it's my favourite part of the story, it's so hilarious at times when people meet are get deja vu.

I am kind of annoyed by how oblivious the main girl can be at times. It's so cliché and gets irritating fast. She does have redeeming qualities though.

One of my favorites
by Aroxie
January 7th, 2022, 7:06pm
Rating: 9.0  / 10.0
This is such a hilarious and cute love story. I will have to say that the reason I only gave it a 9 is because I had to skim through chapters that were dragging out for way too long. Felt like this story could’ve ended sooner, but overall the characters were all great.
Was this comment useful?  Yes

Recommended to be read in one sitting.
Was this comment useful?  Yes

Uhhm, haven't you
Spoiler (mouse over to view)
been living in Korea for 31 years, had a kid, had a husband, AND add +6 or so years in her other life too.

So.. like, almost 40 years old. You can't be THAT clueless about everything and not have hints that the red haired guy you met was the crown prince. Also, she keeps hiding things from her family even though that's important detail?

OH YEAH, DID I SAY SHE HAD A HUSBAND IN HER PREVIOUS LIFE THAT MADE HER SUPER SAD ABOUT? But she suddenly forgot him after 1 meeting with a guy and has the hots for him suddenly. Wow. What "loyalty". LMAO.

Her family's funny though.

I read till chapter 46 / 47 so, I at least know what I'm talking about.. I mean, I don't know. Maybe she just doesn't seem too relatable or like an actual person with her personality.. maybe. Or she's just a bit dull? Sorry, miss Hwayeon.

Lighthearted read
by Bebe~
January 22nd, 2021, 5:11pm
Rating: 5.0  / 10.0
It's not a Manhwa series I would take seriously - it sounds a bit harsh but the premise is not something we haven't seen before...and it takes a real skill to finesse it in a way that would wow the reader. I find the dialogue a bit sloppy and the execution kind of mediocre.

I'm on chapter 24 and I find it hard to believe that this 20 something male doesn't know what love is. I'm not saying it's unbelievable that he hasn't experienced it, but more so how he reacts when his subjects/friends are trying to explain it to him. It's like he has a mindset of a 6 year old, but at the same time, he's also a mature, sinister, skillful, killing machine warrior? I find it very inconsistent, but will continue to see where this goes.
Was this comment useful?  Yes

Anyways, she meets him without having a clue who he is and it changes everything (because she's not scared of him).
Was this comment useful?  Yes