Login to add items to your list, keep track of your progress, and rate series!
Description
From AQUA Scans:

Closet-otaku girl Hirayama lives a peaceful and normal school life. That is until she meets the smart, handsome and popular high-school president and discovers his secret. Her peaceful and quiet world is now starting to fall apart. 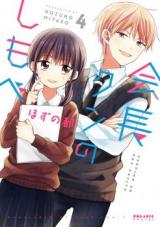 Don't miss this one!
by ELY_12
April 7th, 2020, 11:47am
Rating: 10.0  / 10.0
really lovee this series <3 the heroine was very interesting and cool, not like any other manga that has "easily blushed" female mc, and the guy was so funnyy XD they make a cute couple lol it's very recommended for those who seek interesting & funny manga !! this manga doesn't take much of your time if your a fast reader but if your not it's still a go, though the ending is a bit disappointing it's still a good ride!!
Was this comment useful?  Yes

It's completely one-sided
by plaiin
April 22nd, 2017, 8:03pm
Rating: 4.0  / 10.0
It has a decent first chapter but it's all downhill from there, and the only change is that he starts to like her in the last few chapters. This was terrible, she never liked him and all he did was punish and abuse her for being an otaku. He was extremely selfish, cruel and physically abusive to her the ENTIRE time. Not once did she ever like him and there was probably only ONE panel where she may have thought he wasn't a total piece of trash. And everyone (her mom, her siblings, his dad...) always forced them together because HE wanted her to be his slave.

Like I get it was a "comedy" but I distinctly remember laughing only once. It's not completely terrible because the storytelling and art itself was bearable but the main guy was totally unlikeable. Check it out if you want to read a 4-volume manga where he's just beating her up, taking advantage of her, and ruining every moment of her happiness.

Good art. Strange stuff. All in one.
by Mafino
August 13th, 2016, 5:33am
Rating: 9.0  / 10.0
Oi, mangaka, Hozuno-san. What happens to the Ganguro-kun? That fan of Milk-like-moe-san; a.k.a; Hirayama-san? from the start, I have known that, Hirayama-san was his dear Fiancee and his true O-Hime-sama. Kaichou-sama(Strange nickname) really is a bad-tempered bad guy, right? But I guess world without this character is boring, though. Thank you for Continuing the one-shot. I have been reading your books everyday.

Overally pretty sweet
by ayanechan
November 28th, 2013, 1:59am
Rating: N/A
The scans are a bit confusing. I don't know if its just me, the translations or the manga itself but otherwise its a pretty cute manga. I couldn't say much about plot or character because right now there's only three chapters but I'm expecting a manga that turns out to be pretty good, not great, but good. I hope it proves me wrong.
Was this comment useful?  Yes