Volume 1 Extra - Kaneo-sama's New School Term
Suehirouhji Kaneo, heir to a very noble family, transfers to a public high school with the ulterior motive of letting the "teachers have a taste of a humiliating kiss," which usually ends up in the teacher being dismissed. Will the new teacher fall for Kaneo-sama's charm/tricks? Less... 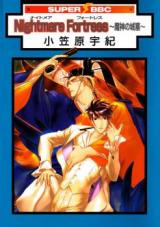 Note: You must be logged in to update information on this page.
Forum Posts Click to view the forum
Nightmare Fortress vol 2?
over 4 years ago

As far as the negative ratings and comments, it's understandable. The plot (and characters and dialogue) is definitely confusing at times but this is just another one of those mangas that try to make a plot instead of having it filled with mindless smut. Even so, the artwork is really great. It's similar to Ayano Yamane's style but I personally prefer this author's style much more.

Minus the confusion of the plot, the atmosphere is definitely to my taste. That's why, even though I'm not giving it a perfect 10/10 it's one of my favorites. It wasn't that interesting at first but do read on, it gets even better as it goes on. I actually got carried away and read the whole volume in one night. But seeing now that there has been no word on volume two yet, I'm regretting that decision though. Really hope to be surprised with a volume two, otherwise that's one terribly abrupt cliffhanger ending.
Was this comment useful?  Yes

Waste of TIme/But Well Drawn
by Yaoichick
August 26th, 2012, 8:41am
Rating: N/A
It says it is completed. It just ended. It is incomplete? did they cancel this series

It even says "to be continued' but I can't find it anywhere, or a volume 2? If you are looking for something that has a good ending, this is not it. I was following along pretty well until it just ends.

If you are looking for something that is well drawn and has many sex scenes, then this is good for you. I personally, like a good plot and a good ending, or else it is just a waste of time.

As a previous person stated, this is a story is just an excuse for sex scenes.
Was this comment useful?  Yes

The key to understanding the story...
by purplesh
January 29th, 2010, 12:54pm
Rating: 8.0  / 10.0
...is to read the "Description" above and keep it in mind while reading the through the chapters. I swear, you'll start appreciating Ogasawara-sensei's humor and you'll be able to tell the the characters apart.

The way Uki Ogasawara-sensei narrated this story is very confusing as each chapter starts at a "different angle" but ends on one common flow. The sad thing about the plot is that it's buried and not quite noticeable on the surface so you really have to pay attention.

The story really is interesting once you understand it. Just be patient and slowly take your time to absorb what the hell is going on.

sex-crazed yaoi on drugs
by sunflower
July 26th, 2009, 9:19pm
Rating: N/A
This is pure crack. There is a plot buried in there, and it looks to be an interesting one, but really I think you're best off approaching this with alcohol in hand or better yet already in your system (erm, assuming you can legally drink it ^^

' You'll be laughing a lot.
Was this comment useful?  Yes

nope, just kidding. hoho but its true. theyre talking about some demons making out with humans which that doesn't make sense so just think about what i said earlier so you wont get confuse about the story coz its really really crazy.

but theres A LOT of it. so enjoy.

Interesting Story
by Chira00
January 30th, 2009, 1:59pm
Rating: 9.0  / 10.0
You really have to pay attention to what is being said to know what is going on or you will definitely be confused. It is an interesting story. Clues are given but only a little at a time, so at first you are not quite sure what is what or who is really the enemy and what they are after. I am really looking forward to reading more and solving more of the mystery.
Was this comment useful?  Yes

Definitely my type of Yaoi.
by ilikeyoumorethaneggs
October 28th, 2008, 7:04am
Rating: N/A
I agree with everyone, this is a hell of a confusing storyline and somewhere down the line, I had absolutely no idea what was going on especially when there were 2 dark-haired (or possibly more?) males added to the mix whose identities were not explained properly. Contrarily I got the gist of it and it was enough to get me through it. Now onto the sex, judging by the reviews you can tell this one special piece of Yaoi material when it comes to sex-the men are drawn fantastic and the penises have details! Sorry if that was explicit but if you've read Yaoi where somehow the male's privates turns into some gentle blurred lines or just disappears altogether, then this is definitely a change because she draws everything and there's a lot of sex packed into such a little volume. The plot itself isn't bad, I was really excited when I started reading it but it's how it unfolds, you just don't know who is who out of the new characters. Lots and lots and lots of bishies and exquisite art. Maybe I'm a hentai, but I am loving this strange sexalicious story.


Okay updating this because I reread the story carefully AND I UNDERSTAND IT, WHICH MAKES IT SO MUCH HOTTER

Also I thought this was complete! I'm looking forward to more

the art is really super. you may not see such a gorgeous and hot guys any where else and the sex is pretty amazing. orgies, gang rape, S&M, cosplaying, any thing you like you will find it in it! but the story is really confusing. it took me a while to understand what was going on and at the end I found the concept of the plot line so lame and stupid but still the beautiful and hot art of it makes it worth to give it try. and I have to confess that I also fell under the spell of sensei, she is just a great artist despite the stupid, lame story line.

stupid
by grumble_cakes
October 6th, 2008, 12:40pm
Rating: 3.0  / 10.0
this had to potential to be fun-sexy-stupid but it's just stupid-stupid. The plot and settings are incoherent and there is so much sex I found myself skimming over the sex scenes in an attempt to get back to the "plot". The art is nice but there were too many dark haired characters and it was hard to tell the difference between them. The main couple has no chemistry and none of them are interesting.

I kind of wonder if the mangaka is female because there is something very masculine about this title and another title I've read by her.