Login to add items to your list, keep track of your progress, and rate series!
Description
The manga follows high school student Hotaru Tachibana, a girl disguised as a boy. Through strange circumstances she finds herself drawn into the world of survival games by a host, Masamune Matsuoka. The two form a team with ero-manga artist Tooru Yukimura and aim to be the be the best in Japan. 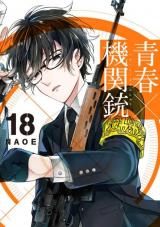 Extremely Melodramatic
by NerevarineVivec
May 22nd, 2021, 9:52am
Rating: N/A
One of the big factors in how much you will enjoy this is your ability to suspend disbelief in the completely overdramatic campy scenes. The setting is about people playing a hobby where they LARP with toy guns, but the series takes this sooo over the top. You have stuff like one of the characters lamenting how he can't defeat his brother in a make-believe game and because of that he is going to be alone his entire life (lol). Stupid scenarios where after the main characters reserve a campground and another group who wanted to use it challenged them to a game. The challengers had less players so they made some verbal agreement where the teams can be unbalanced with a 3v4, but WHATTTT they TRICKED the main characters! Because the challengers secretly had some more players and now the main characters are outnumbered fighting 11v4. Dude, just tell them to fuck off because you already had the place reserved and were only humoring them in the first place so this whole stupid agreement is completely meaningless. But I guess then you can't get your Saving Private Ryan scenes.
Was this comment useful?  Yes

So underrated
by Udtel
April 23rd, 2021, 5:56pm
Rating: 9.5  / 10.0
At first I thought I'm only gonna try this one out bc I'm bored. But I got so attached to it that even after finishing the whole manga it feels like I need to read more
Was this comment useful?  Yes

Really refreshing gender bender “shoujo”
by Disperse
February 17th, 2019, 5:45am
Rating: N/A
This is classified as shounen but it’s really a shoujo in disguise. Perhaps you could even call it a shounen with a female target audience. And I love it.

Basically many of the bad aspects of shoujo are absent (pathetic female leads and repetitive storylines) and shounen elements are added, such as action and cool characters and scenarios. I can’t say that every element is handled perfectly, sometimes the plot gets all over the place and certain things feel cheesy. But the manga is just so refreshing I am grateful it exists.

The main female lead is convincingly strong and has growth, you pretty much never get female leads in shoujo like this. And yet it retains a bit of the fanservicey sides of shoujo with hot guys and cute events.

By the way, Naoe also posts related crack comics on twitter sometimes, so it’s worth checking out if you’re a fan of this series.

Well developed
by Teabag
November 6th, 2017, 10:20pm
Rating: 10.0  / 10.0
Honestly the lines are cheesy, sometimes the art is a little out of proportion, but this author really does a great job of developing each and every one of the characters. Also the genderbent main character is awesome. This manga really does well with incorporating a lot of different interests for a wider audience, so I think everyone should give it a try!! The interaction between characters, the "antagonists" and the action + hints of a romantic subplot really make it a good read!

Sweet!
by dezin19
July 24th, 2015, 11:14pm
Rating: N/A
Finally, a shounen manga with a decent female lead! For that alone it deserves a ten. Hotaru is funny (especially the way she speaks in Japanese) and holds her own in battle, even saving her comrades on occasion. Take that gender stereotypes! Props to sensei. The art is nice, as well, and the plot concept is fresh. Definitely give this a shot (pun intended).

totally original
by meridianna
December 18th, 2014, 7:43am
Rating: 10.0  / 10.0
this manga is totally refreshing.
rather than about a-boy-who-save-world, instead this manga is about survival game which can be very interesting and exciting. and still there's no dead men appeared.
it's totally calming when there're too many manga about apocalypse and dead men and betrayal and corpses and cruelty and chaos and supernatural power and fanservice. and still can be exciting.
it even has a touch of reality. well, even ero-mangaka is depressed right? including host too.
the art is very nice though it's said it was a debut manga. seriously? it's too good. i almost forget that this is actually debut manga because the art is very neat.
and yeah, you don't often see a host and ero-mangaka teaming up in survival games and a girl-in-boys-uniform joins them. and doctors might like survival games too.
Spoiler (mouse over to view)
but i've never felt so contradicted like this before. i really wish the heroine were male because.....oh God! she's too cool!!!