Login to add items to your list, keep track of your progress, and rate series!
Description
Vol 1
1-4) Kyoushi mo Iroiro Aru Wake de
Komori Tadamachi loves teaching at an elementary school, the only problem is fellow teacher Takigawa Kyou. Always being compared to the perfectly composed and devastatingly handsome Takigawa (even by the students!) is really destroying Komori's self-esteem. Still, Komori finds himself being drawn in by Takigawa's effortless charm...

5) Sensei no Kokuhaku (Sensei's Confession)
Kunihara sensei is a handsome college prep teacher who is used to fending off the advances of his female students. But adorable and shy Kakei appears to have a crush on sensei too,... More...
Vol 1
1-4) Kyoushi mo Iroiro Aru Wake de
Komori Tadamachi loves teaching at an elementary school, the only problem is fellow teacher Takigawa Kyou. Always being compared to the perfectly composed and devastatingly handsome Takigawa (even by the students!) is really destroying Komori's self-esteem. Still, Komori finds himself being drawn in by Takigawa's effortless charm...

5) Sensei no Kokuhaku (Sensei's Confession)
Kunihara sensei is a handsome college prep teacher who is used to fending off the advances of his female students. But adorable and shy Kakei appears to have a crush on sensei too, only he won't admit it. As Kunihara tries to find a way to deal with male student admiration, he finds himself more and more interested in Kakei. 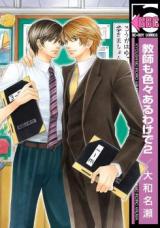 I need to write a review
by Sanna888
March 22nd, 2020, 1:25pm
Rating: 10.0  / 10.0
So I have been reading yaoi for over 10 years now. Yes. I have read so many different kinds and the last story in this is one of my favorites. I think that many of the reviewers didn’t get a chance to read about the third couple back then. Since the reviews are so old. The third couple was introduced later on.

So there are three stories in this manga:

The first one is cute and fluffy.
The second one is eh
The third one is excellent.

The third story is about a teacher and his student’s parent. They knew each other when they were kids. However, the teacher used to be like a rebel who used to get in trouble. Now, he is a strict teacher. I love the development between the two! It’s really enjoyable.

Cute and fluffy
by sandyatthebeach1
October 16th, 2012, 3:59pm
Rating: 7.5  / 10.0
It was nice! Nothing super memorable, but it was cute and adorable (I loved the little kids, haha, they were so annoying, yet sort of sweet). And man, they actually used condoms. Kudos. Teach people about safe sex, lol, seriously- just 'cause he can't get pregnant doesn't mean condoms aren't necessary! HIV actually spread among gay men the fastest when the virus was first discovered... anyway, enough about that, haha. This manga has nice art, and it's much less cliche than I imagined. The characters were sweet, and I enjoyed it quite a lot- there were a few really funny moments, and some awkward moments. Overall it was a really cute read

A nice, fluffy one
by 801crazed
August 12th, 2012, 5:23pm
Rating: 7.5  / 10.0
This manga is not great by any means but it was cute and light-hearted. It was a good read to relieve myself from boredom. It also featured something I rarely see in BL: SAFE sex! The main characters actually used a condom (which I think is a turn for the better).
I also saw some comments where the scanlation was release about WHY a condom was needed at all. Things along the line of: "He's not going to get pregnant, lol XD"
*facepalm*
Man, those derpy fan-girls... *sigh*

Great
by Twayblade
April 21st, 2012, 10:42pm
Rating: 9.0  / 10.0
For the main couple's chapters: the story's cute, realistic (for the genre), funny, and it has pretty artwork and consistent quality in writing. The relationship is developed at a good pace, and was mostly healthy. The kind of relationship a reader can root for unreservedly.

And yes, there is condom use. I don't see why that's so incredibly important to portray though. Yaoi is not the place to get your safe sex tips, or to preach safe sex to others.
Was this comment useful?  Yes

THEY USED CONDOMS! Safe sex in a BL book! I'm shocked and happy! Kids, never let anyone sleep with you without a condom.

But as far as the story... it's cute, like I said. I actually liked the kids a lot better as characters than the adults. They were adorable and so funny!

The second story... I didn't like. I thought the characters were flat, had no chemistry, and even though that kid was 17, he looked 12, and that was creepy.

The art in the whole thing is very pretty, but honestly I'm not in love with it. It doesn't convey emotion too well most of the time. It just looks nice (which IS good, but...).

So, the whole thing is pretty good! But not awesome.
Was this comment useful?  Yes

I laughed at the little kid's reaction when they are making fun of their teacher. As the important side characters, they really help bring more enjoyment in reading this manga. Cheers for Todamachi-sensei for trying his best of becoming the best teacher for the kids.
Was this comment useful?  Yes

well
by MangoLuve
March 6th, 2011, 8:21am
Rating: N/A
I only read the oneshot which i think is quiet regratable seeing as everyone has rated it so highly...the oneshot was pretty interesting and it was fun watching the sensei SQUIRM! kehehe he fell of his high horse, im glad ^^ i have to try and read the main story now!
Was this comment useful?  Yes

Nice
by sarablack10
January 9th, 2011, 9:58am
Rating: N/A
It was a really cute read. It was realistic about the uke's feelings. He didn't know how to react to learning that the 'perfect teacher' he was being compared to was gay. He tried hard to understand him but, alas, it led to misunderstandings (which is realistic!). I liked how Kyou kept on making moves on him. They both have motives for their actions and it's not really like random thoughts and whatnot. I love their passion for teaching. It's a mature story, but not like in the smutty way. Its humorous without being idiotic. I love the little children. The adults are both men, not like "IM AN UKE" and "IM A SEME" looks to them. They're both responsible adults that have their faults. I enjoyed this a lot.
Was this comment useful?  Yes

An Usual Piece for Yamato-sensei, But An Important One in Her Collection
by MightyMaeve
October 24th, 2010, 12:56pm
Rating: 9.5  / 10.0
This is one of the few manga by Yamato-sensei that has--gasp!--condom use! By the end of volume 1, we have a very responsible man--because he's a teacher, yanno! Being such, he uses a very responsible method--even though he didn't really need to...

This manga series is also unique--and important--among the many great works of Yamato-sensei, a mangaka who dances on the head of 'controversial' with her baby-like appearance of her consensual youths engaging in clearly adult behaviour. She doesn't bang the reader over the head with diadactic moralizing, but she makes a powerful--and succinctly beautiful--point in volume one about sexual stigma and prejudice. Ironically, she makes her point with a manga that is unusual for her: both seme and uke are her typical 'seme' look.

The dialgoue is quite brilliantly translated; many of the scenes have the words taking on double meaning for plot development and humour. The basic story plotting formula is the same: tentative love, miscommunication, budding love, then jealousy rears it's possessive "claim you" type of need and corresponding behaviours, and finally, the mutual understanding.

Really, this one is one of her best as far as a serious story, though, with the two men growing and learning about one another. And her art is certainly not hard on the eyes, and neither is her narration style difficult to maneuver.
Was this comment useful?  Yes

Kyoushi mo Iroiro Aruwakede
by angelkurisutin
February 8th, 2009, 12:07am
Rating: 9.0  / 10.0
Komori is the main attraction of this manga because he's a very likeable character; he's not perfect, and he knows it, but he always tries hard anyway. I kind of wish he had been more certain of the types of feelings he held for Takigawa, though. It felt like he was liking Takigawa out of a sense of duty to try and "understand him", as he often put it... but maybe the mangaka just wanted to use this personality trait for Komori to realize that he did, in fact, hold true feelings for his colleague. At any rate, the manga was cute and fun, and it did make me smile a lot. One thing that will stand out is the character designs- both Takigawa and Komori are pretty equal in masculinity, something you don't see much in yaoi manga.
Was this comment useful?  Yes