Login to add items to your list, keep track of your progress, and rate series!
Description
Aflame Inferno is about a self absorbed high schooler, Kang Shichan, that gets caught in the middle of a battle between demons. Injured severely and near death, the demon Inferno merges with the student to save his life. Together they win the battle to discover that they are inescapably joined. The only hope of ever being separate beings is to gather 1,000 Invento Hells and find the right spell of Resurrection. Can Kang Shichan balance hunting down demons with his school work? 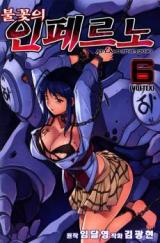 Note: You must be logged in to update information on this page.
Forum Posts Click to view the forum
Are the Licensed Aflame Inferno mangas published yet?
over 12 years ago
Is ManWhore Scans still doing Aflame Inferno?
over 13 years ago

PSA to please boycott Lim Dall-Young.
by Jandalman
February 17th, 2020, 3:58am
Rating: 1.0  / 10.0
Seriously, this man is the absolute scum of manhwa and mangadom. Constantly starting new works without ever finishing any of his previous ones. MCs are always angsty mentally weak boys while all the female love interests always get abused in some shape or form. Absolute lose lose situation. AVOID HIS WORKS LIKE THE PLAGUE.
Was this comment useful?  Yes

Hiatus.
by woot6
November 17th, 2012, 2:18pm
Rating: N/A
This's been on hiatus for so long, but now that he's started finishing some of his other works, I've started to hope that he'll manage to start this up again. Im Dal Young DOES still have a lot of projects going, tho...
Was this comment useful?  Yes

Humans don't have souls!
by jasperv
October 25th, 2012, 12:49pm
Rating: N/A
for an Im Dal manga it not bad I think I favor this over Freezing
It has a nice concept but like always Im dal young's choice of name is random and weird
if you are fascinated by demons/jinns then this manga concept have some surprising speculation for you
Was this comment useful?  Yes

Not Bad, Not Very Good Either
by McCasper
April 23rd, 2011, 9:19pm
Rating: 6.0  / 10.0
At this point we should know how works by this author go. He takes a traditionally shounen story archetype (this time: form-contracts-with supernatural-entities-and-battle-other-contract-couples a la Zatch Bell or Fate/Stay Night) and infuses it with mature content (this time: main character is arrogant and selfish with almost no redeemable qualities and a major character dies within the first volume). This one is a bit worse than this author's other works but you should know what to expect.
Was this comment useful?  Yes

good cookie cutter manga
by ajcoolim107
October 1st, 2010, 2:58pm
Rating: N/A
if u are in for character dev...step out
if potrayal of chauvinism at its peak is ur thing ...be right on it

anyways fanservice is in loads...some interesting plot twists
Was this comment useful?  Yes

Nothing new, but still fun
by brid
April 14th, 2009, 8:41pm
Rating: 7.0  / 10.0
You know what? Cheesyhoboe is right, this is a by-the-numbers action shonen involving demons. DO NOT go into Aflame Inferno believing you'll find something that'll blow all other shonen mangas/manhwas away, even all other shonen mangas/manhwas with ecchi. You won't find it.

Having said all that, there's still something about Aflame Inferno that keeps me coming back chapter after chapter. The artwork is good, particularly if you like ecchi, and even if you don't, you'll probably still like it. I don't usually like it, but rather than using the ecchi to humiliate the female characters in some way, (apart from the first chapter) this is more of a case where the main female is drawn in an idealized, provocative way, which I have no problem with.

As for the characters, I don't like the main character--4 volumes in and I can hardly tell you anything about the guy: what he wants out of life, his like/dislikes, nothing. He's more of a collection of accomplishments rather than an actual personality. But even if Kang Shichan is lame, nearly every single character is better, especially the 4 kings of hell. Each one is very different than you expect him/her to be--not quite evil, not quite good, and they all have interesting relationships with one another. So far, it seems like they will be the focus of the series, which is very, very good, except that it makes Kang Shichan sort of extraneous--he's there because he's Inferno's host and is in control of their body, but why not have just made Inferno the lead and forget about him all together?

The romance is pretty good too. Kang Shichan has 3 potential women he could end up with: Of course Chaehee or Gehenna, but also surprisingly
Spoiler (highlight to view)
Inferno, who was very pretty when she was human.
Undoubtedly it'll be either Chaehee or Gehenna, but that last one could be very, very interesting if it comes to pass. All in all, I'd say give this one a shot as it's fun and you'll probably like it.
Was this comment useful?  Yes

Great Manhwa...Shame about meep tho
by board_sport5
February 16th, 2009, 7:13pm
Rating: N/A
This is truly a great piece of work. Im Dal Young comes up with another great series. It really is too bad that Meep scans, the group that was scanlating got shut down. i wonder who's going to take over...
Was this comment useful?  Yes

quality shounen
by Cheesyhoboe
January 27th, 2009, 11:13pm
Rating: 8.0  / 10.0
Another Im Dai Young manga, and a good one. If you've read anything else from him you'll know what to expect here. This manga is a pretty typical high school shounen action series involving demons, who the main character finds himself fusing with, allying with, and fighting against. While it all sounds by-the-numbers (and it is), the world and setting are interesting and fairly fleshed out, the action scenes are smooth and exciting, and all of it is accompanied by the off-beat and slightly deranged tone and characters that can be spotted in any Im Dai Young manhwa... oh, and the ecchi. Don't forget the ecchi. It's an entertaining read.
Was this comment useful?  Yes