Login to add items to your list, keep track of your progress, and rate series!
Description
When their parents remarried, Shiina gained a little stepbrother 5 years his junior, Kazuya. Kazuya is a picky eater and only eats the food prepared by Shiina, who is a chef.

But as Kazuya grows older, he became more and more distant, leaving Shiina feeling at a loss from the growing distance between them.

When Kazuya enters high school he completely change and even rape his brother!

Shiina is shocked that is little brother violated him and runs away from home. 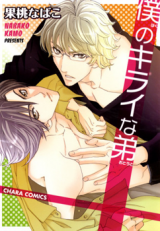 well idk about the others
by Miachann
October 5th, 2020, 9:18am
Rating: 9.0  / 10.0
But i personally enjoy this a lot XD the stories itself dark and heavy but not really heavy to me? possessive Seme who also younger bro and Uke who is Older bro, well the plot is cliche (Rape->Fall in love) but the mangakas good with portrait the plot anddd- even tho the character development so so so- little and Stockholm syndrome at its finest.. but i enjoy it

Terrible
by birersuit
January 22nd, 2017, 4:06pm
Rating: 2.0  / 10.0
This has to be one of the most terrible mangas I've ever read. I hated reading this but I read it to the end with the hopes of a different ending but no, the mangaka had to fill the main character up with stockholm syndrome. Urgh, awful work. Hateful characters. No self steem, no real love only obsession and stupidity.
Was this comment useful?  Yes

Stockholm syndrome at it's finest
by Dagorkitty
January 18th, 2017, 7:52pm
Rating: 2.0  / 10.0
So, main character gets raped by his younger brother, is scared but still worries that his sibling might hate him, then he's raped a second time and finally he runs away. Three years later the younger brother finds him, blackmails him, takes him to his apartment and chains him up, so basically imprisonment. He resists in the beginning, but soon little brother wins him over and when he's told that he's always loved him, oh wonders, he realizes that he loves him back and everything is fine and dandy of course. Yeah... Stockholm syndrome written all over this. To be honest I was annoyed most of the time while reading this, the main character is an idiot with no true self-respect and the brother is an entitled jerk of an abuser who later becomes a pathetic submissive abuser.
Was this comment useful?  Yes

erm... yeah.. it can be good
by dorsa_al
April 15th, 2016, 4:35pm
Rating: 7.0  / 10.0
the overall plot might seem as a cliché of overpossesive seme with violent manner towards the uke. thought their not related, older brother seem to have more family bond and little brother feelings are different. this manga tried to show different view of character love towards each other.
all in all it's nice manga in some ways but there are some flaws like you might feel that the brotherly bond of older brother and love of little brother needed more work and explanation to build up the whole plot.
you might enjoy it

It's all right...
by bottledwater
October 2nd, 2012, 6:08pm
Rating: 6.0  / 10.0
I can't believe Kamo sensei would write such a dark subject, very different from her usual cute and fluffy romance stories. This is about two step brothers one of whom is in love with the other. So much so that he ends up raping his step brother. After the step brother escapes to Hokkaido, he tracks him down, blackmails and kidnaps him.