Login to add items to your list, keep track of your progress, and rate series!
Description
Once upon a time, the land was engulfed in complete darkness. The King of Light, who lived in Heaven, wanted to create a nation of light on the land. He sent out his royal son, Rain of the Rainbow to the King of Darkness, Ebb. The two instantly fell in love and did the opposite of what the King of Light wanted: began to live happily in the Kingdom of Darkness. 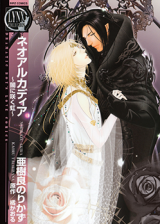 Not bad
by juls91
October 8th, 2014, 7:50pm
Rating: N/A
It is pretty obvious who the artist of this manga is... Just to make that clear if you want to see more of her art which i enjoyed while reading this.

To be honest it really bothered me when the "missing" happened, i knew it was going to happen (is in the description after all) but i kept asking me why oh why, and when everything was clarified i started to enjoy it again. Spoiler alert: because it was stated that those two little creatures of light were the same haha.
Even though this has 8 chapters it all moves really fast, but it's lovely, sweet and cute. Not for everyone though.
Was this comment useful?  Yes

Akira Norikazu
by angelinarose5
March 26th, 2013, 1:45pm
Rating: N/A
At first it wasn't really obvious that Akira Norikazu was the one artist because the uke was so tiny. Usually her ukes are still pretty muscled. The story however was clearly not hers, which was disappointing because it would have been a good one had it had good development. It was too fast paced which is a really weird thing to say when there were like 8 chapters but it seemed like the chapters were really short. The story moved quickly and a lot of new elements were added carelessly, not being explained or introduced well.
Was this comment useful?  Yes

Fast paced and blah! XD
by mlat26
January 29th, 2013, 1:41pm
Rating: 7.0  / 10.0
It disappointed me, it had a lot of potential but then it became an instant love, instant drama, instant everything >.> it could have been so much better but it fell soooo short T-T It is just too fast paced and the characters lack depth.
Zebb if hot though

No wonder it feels incomplete.
by shinobipopcorn
September 8th, 2012, 8:38pm
Rating: 8.0  / 10.0
I read this in Japanese, and while the art is very pretty, it just felt like something's missing. Who were those guys in chapters 2 and 3? Then I figured it out- There are three Neo Arcadia novels that this manga was made from. It would really help to have read them beforehand.
Was this comment useful?  Yes

Okay...I know what you're thinking...
by MangomyTango
July 28th, 2012, 7:29pm
Rating: 10.0  / 10.0
IT SUCKS!!
Yeah! Certainly the first chapter sucks, but the fast romance was actually the plot sparker to the story dynamite. Makes tons of sense, if you ask me. I was very skeptical of this series being any good, but it does indeed get better. LOL and I'm very serious. No sarcasm.

The romance between Zebb and Theia took more than one chapter to develop! Immense improvement if you ask me! But still...I guess Theia's innocence makes him so easy to fall in love with Zebb when put in such a compromising situation. It's quite sad and the story makes you gasp and yell at Zebb for being such a playa! Remain faithful to yer Rain ya fool! However, you kind of root for him at the same time.

Oh! Be still my beating heart!

However, things start to make you wonder...Is Theia and Rain the same person? WE shall never know! Eventually...WE SHALL LEARN OF THE TRUTH!

And learned we did...

There is also a huge background story for the kingdoms all around. There are consequences behind Zebb's enormous amount of love for Rain. This whole whirlwind of a story has definitely turned for the better.

So, give it a try...and stick around. I think it's decent enough to make you stick around. Plus I'm a sucker for fantasy themed yaoi and this one is definitely not as bad as it seems.

Romance for a 10-year-old?
by kute_changmin
July 11th, 2012, 7:20pm
Rating: 6.0  / 10.0
The art is okay, not the best from this mangka though as the uke looks very girly and not very expressive. After 10 pages or so of the first chapter, I cringe due to the bad cliche plot and stop reading. The main characters fall in love with each other within like 10 seconds or so and head to bed... I feel like this type of thing is age-inappropriate to me because I am no longer a 10 year old who believes in such a random romance. The pace of the romance should be realistic and relatable regardless of whether the genre is fantasy. Cliches sometimes are good but in this case, the cliche is not my cup of tea
Was this comment useful?  Yes

Is Rain and Theia the same person?
by Backlash67
April 2nd, 2012, 7:48am
Rating: 9.0  / 10.0
I really like the series. I wish chapter would come out sooner because the suspense is killing me. I think Rain and Theia is the same person. In mythology Theia is a Greek goddess of sight and shining light (but this is yaoi so it's not surprising a male character is named after a female deity). We see in the plot Rain is bright and brillant as well as a bringer of light.

I would also like to point out that Iris is the Greek goddess of the rainbow. I don't know if it has any relation but the iris is a part of the eye which is the organ in which we have sight and detects light (see the relation to Theia, huh?).

Anyway, I really believe Theia is somehow connected to Rain. I think the time Theia says he's been in the village he lives is supposed to throw us off; however, we don't know that time in the newly created world is the same as the other worlds where the gods exist. More specifically, with Wrath, a magician, around whose to say Wrath didn't alter the people's and Theia's memory to make them believe "Theia" was in the town for 2 years?

meh
by KabukiCho
March 27th, 2012, 4:48pm
Rating: N/A
The art is beautiful but the story is generic. I also didn't like the fact Rain disappears
Spoiler (mouse over to view)
and because Zebb can't keep it in his pants he has sex with some kid who looks like him.
I was rather heartbroken and turned off the whole series (it's only 1 volume, i believe)
Was this comment useful?  Yes

I didn't like Rain. He came off as a regular and uninteresting, meek and helpless shoujo girl. Not my cup 'o tea.
Was this comment useful?  Yes

Really good ^^
by sammiiii-san
September 25th, 2011, 1:47pm
Rating: N/A
Well, i actually read the first chapter for this quite a while ago

I hope this gets continued with the scanlating, it was really good so far