Login to add items to your list, keep track of your progress, and rate series!
Description
"Healing magicians cannot fight alone." Keare, who was bound by this common knowledge, was exploited again and again by others.

But one day, he noticed what lay beyond healing magic, and was convinced that a healing magician was the strongest class. However, by the time he realized that potential, he was deprived of everything. Thus, he used healing magic on the world itself to go back four years, deciding to redo everything.

This is a heroic tale of one healing magician who became the strongest by using knowledge from his past life and healing magic. 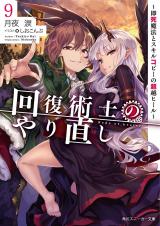 Note: You must be logged in to update information on this page.
Forum Posts Click to view the forum
"Redo of Healer" More Popular with Women According to Creator
about 1 year ago

Spoiler (mouse over to view)
As we go along in the latest volume of the light novel. He manage to defeat bullet and able to complete his vengeance. He was actually looking for a quite life and get some offspring. It just that the author wants him to be a an emperor or something. He as rules that he follow's by the way. Thou shall not fuck with me for i will fuck you hard. Something like that.
Was this comment useful?  Yes

One volume read - not more
by SinsI
January 20th, 2018, 8:21pm
Rating: N/A
MC is far, far too overpowered, which really kills the tension after he achieves his initial goals - novel suffers from the lack of any serious threats, and him knowing the future doesn't help it either.
Was this comment useful?  Yes

One where the heroes you thought you know were actually the most despicable people on the planet. Imagine for a moment that you were tortured and raped for days on end, being treated like a dog and puppet while force fed addictive drugs. Now imagine what you would do when you're allowed the chance to go back in time and keep the memories from before - how differently you would change things such that the ones who put you through such hell would go through a hell of their own, one that you inflict upon them once they showed their true face.

This is one light novel that will show you how far human depravity can go, not just of the main character of the novel, but that of the other heroes. This is the one novel that really shows how the word "hero" is in name only - that the actions of such people are much, much darker in reality.

This novel goes opposite of your normal "young boy becomes hero" trope and puts a whole new and more twisted spin on it.