Login to add items to your list, keep track of your progress, and rate series!
Description
From Dan of Population GO:

Yukihira Souma's dream is to become a full-time chef in his father's restaurant and surpass his father's culinary skill. But just as Yukihira graduates from middle schools his father, Yukihira Jouichirou, closes down the restaurant to cook in Europe. Although downtrodden, Souma's fighting spirit is rekindled by a challenge from Jouichirou which is to survive in an elite culinary school where only 10% of the students graduate. Can Souma survive? 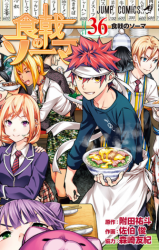 Note: You must be logged in to update information on this page.
Forum Posts Click to view the forum
Who is soma going to end up with?
over 5 years ago
Educated Guesses and Wild Theories
over 6 years ago
Next chapter?
over 7 years ago
Getting animated
over 7 years ago

1. same thing dealing with (nakiri family: mother , half brother) (again) and souma going to save erina (again).
2. villain out of nowhere that is too op and annoying and able to defeat
(jouichiro 5-0 (should be the final boss (obstacle) that souma have to face , eishi and megumi)
3. after all of the building in erina's character development went waste why?
just because the villain change her mood!? what is the point of building character
development? (character regression).
4. the villain made proper advances towards Erina and actually put his hands on her before.
Soma hasn't even come close to doing the same smh (basically NTR).
5. the villain kidnapped erina and let her go later and
she didn't do anything like sue him or put him under arrest for what he did !?
6. the villain has one of superpower BS and not to mention the CHAINSAW.
7. the villain makes soma look like a TRASH in the first challenge.
8. what erina did something useful in the blue arc? NOTHING
9. the power of the rice was too strong XD
10. no rindou =(
11. i think yuki morosaki was not involved in the blue arc
(Morisaki is the brains of all the recipes used in the series.
The series officially lists her as a "collaborator"😉.
12. removed 80% of cooking from the manga
13. some clowns (noirs) and cooking with some kind of a weapon WTF.
14. foodgasm and the art style (manga) was no longer interesting in the blue arc
15. Also, the usage of the character are not that emphasize so much compared to this arc.
It is just like a usual shonen anime where the story just revolves on the protag and the antag.
Was this comment useful?  Yes

Probably should have ended a while ago.
by SomberNight
December 7th, 2018, 2:09pm
Rating: 8.0  / 10.0
I loved this manga when I started reading it. Good art, fun characters, interesting plot.

But I cannot suspend my disbelief to accept what happens later after they
Spoiler (mouse over to view)
defeat the elite ten and fight the dark chefs.

Too many aspects of the story just get ridiculous because they have to one-up the enemies with every new arc, and I feel like this story should have just ended before it came to this.
Was this comment useful?  Yes

I like the idea of the main character being competent. Souma is really cool, and all the other characters arent behind. I like how Megumi, your usual “always rely on the MC” character, actually grew into someone that could hold her ground in competitions.

So the plot... I love it! Not the “plot” though, if you know what Im saying. Im not too big a fan on ecchi series, but I will read it if the plot is just too good. I love competitions with cooking involved. The reactions to the food makes me laugh while giving me anxiety at the same time. Whenever they appear I have to just close my tab, just in case my family just walks in while Im watching it. XD pretty sure I lost a year to my life when watching the anime.

The art is one of my favorite things about this. The characters look beautiful in every chapter, and dont even get me started on the food. The food makes my mouth drool, and I get way too hungry. Definitely dont watch this on an empty stomach. The drawings depict how delectable the food made are. Each stroke has meaning to it.

I enjoyed this series a lot. The mangaka did a great job in bringing out the deliciousness of each dish, while being completely original. Despite the extremely obvious fan service, which isnt to my taste, I really enjoyed the series. The characters go through development, like with Megumi for example, and goes in depth about the story.


I might just be super petty for not giving it a 10 because of the fan service everywhere.

funny at first
by kari+
September 16th, 2017, 10:30pm
Rating: 6.0  / 10.0
It great at first but then get very repetitive. Once you see the few funny moment it the samw after but different art pose gasping or expressions of the food oh wow. if these kids are so good at cooking why be at this school to begin with? i got tired reading after vol 5.
Was this comment useful?  Yes

For now 9.
by weltall2
January 26th, 2017, 7:53am
Rating: 9.0  / 10.0
I think people have expectation of the manga, that from the first chapter it obviously shows it will not fulfill. The manga obviously shows it is not taking itself seriously, nor that it will be a "real cooking" manga. It is funny, silly, amusing, but the thing it is not even trying to be, is realistic. This gives more like "Yakitate Japan" vibes to me, as in that the recipes and ideas are real, but for them to even be possible to happen, the cook must have godly unearthly skill.

I have to also say, to people that like me can get annoyed from too much fanservice, that the fanservice in this one is scarce. Of course I say it is scarce, compared to other stories that constantly you see random fanservice that throws you off. For this, fanservice is connected with the food tasting and it is enjoyable paired with comedy, usually being a guy appearing in a really amusing ecchi condition along with the girl. There is also a running joke about octopi, which actually whenever I see it I think of a usual meme about Japan, which makes me chuckle. Ecchi by now makes me feel tired and unhappy, making me drop many stories. Thankfully on this one ecchi is not drowning the story away or taking up a big part.

It is indeed like it is mentioned a rinse and repeat story, but at least for now (thankfully) it has not made me lose interest, like it happened with Yakitate Japan and the Yakitate 9 story arc. Although I am expecting this story to be milked, I am trying to always be more acceptive of that, since it feels that in the 21st century, money move the world.
Was this comment useful?  Yes

One of my favs
by KingdomCome
October 16th, 2016, 4:04pm
Rating: N/A
Shokugeki no soma is one of my favorite manga's out there. I can agree with some people that sometimes the fights can become a little predictable, but the story's good and for me its hard to predict whats going to happen next. Also I absolutely love the art style.
Was this comment useful?  Yes

A bit desappointed at times but still very enjoyable
by PZcolo
August 5th, 2016, 3:46am
Rating: 7.5  / 10.0
There are many reasons why I could find this lacking, I don't like how the mangaka sets rules and breaks them on convenience for his story-telling (Can't give examples of this without spoilers, needless to say the structure of power is way too fickle). Same goes with the ideology of central, it's so ridiculous and shallow it takes off the weight of the struggle. The plot is pretty repetitive. The way enemies are always underhanded to villanous degrees but when they taste the food they don't lie (except for Nakiri, one of the main chars who prefers ruining a students admission to the school rather than accept she was wrong; later on the reader is supposed to pitty and like this cute poor girl). And so on, yet I still like it, perhaps because some of those flaws are intended and purposely made fun of but what really makes this shine are the characters and the art, for the most part standard but at times very rich with detail.
Was this comment useful?  Yes

Drawing are nice, and it goes both for characters and the dishes most of them make.

There's actually a plot! Pace is decent as well.


Looking forward to each new chapter.
Was this comment useful?  Yes

this is just awesome
by lilsmally
August 18th, 2015, 7:37am
Rating: 10.0  / 10.0
I can't believe that there are actually haters of this manga, I mean that it is just plain great. It does not get played out or boring the MC is just refreshing losing but losing fate just keep trying and improving, to plus on it he is not a pushover. Even the supporting characters are interesting funny and I kind like the Soma and Megumi pair .Even though she was a complete scaredy cat she learn from Soma and tries to improve her self to cute. Anyways please give it a chance it's worth it