Was also adapted as a live action movie directed by Akira Nagai and starring Nana Komatsu and Yô Ôizumi. Less... 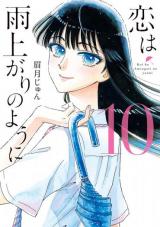 Note: You must be logged in to update information on this page.
Forum Posts Click to view the forum
Koi wa Ameagari no You ni Ends in 2 Chapters
over 4 years ago
Yay an anime adaptation!!!!
over 4 years ago

Beauty in every page!
by Hokkaidochai
April 12th, 2022, 9:55pm
Rating: 9.0  / 10.0
This series is one of the best romance manga I have read yet, and probably it would retain the spot for a long time. However romance is not really the main point of the story, just an integral part of it. It is more about growth, in the form of accepting what you want to do in life, and working towards it. Atleast I get that impression. The bonding between the 2 main characters is pretty great, we can feel them getting closer throughout the series.


The art is also cool, and enhances the chill soothing vibe of the manga. Mangas like these are better read slow, as they don't contain any earth shattering twists and turns and give more time to make you immerse in the setting and characters. There are a lot of moments in the manga where I like to go back again, as the moments are that iconic despite everything being so slow paced and chill due to the art and the writing. I have to commend the translators too as they did an epic job.

The last volume where there is a parallel universe going on where the MC and Kondo are in a high school at the same age is pretty great. The conclusion was nice too. It completed the character arc of Akira and you feel happy for her growth.


If there is anything I'd like to complain about, it's that I wish Kondo had gotten some more respect or success throughout the series. He is mostly just lamenting about how he has gotten old and doesn't deserve all the niceties that come with youth.
Spoiler (mouse over to view)
Akira gets success again when she restarts her running career, but Kondo doesn't get any win. I guess you could say that's not the point of the series, but I feel like my boi was done wrong(a bit).
Also the side characters were pretty forgettable except Akira's work buddy. It's not that they were bad, just that you don't necessarily wish to see them again and again.


As per the title, rain is given a new meaning in the manga, I won't be able to properly express it in words, but it's beautiful, just like the series.

The best read in 2020 and beyond
by hahahahahahahahah
September 23rd, 2020, 1:08pm
Rating: N/A
I actually read this manga first in 2018 when it was nearing its end but still not finished. I remember myself anxiously Googling the next chapters in Chinese because I couldn’t wait for English translation any longer. However the Chinese translation was also not yet completed! And then, several months after, I went to Japan and - I clearly remember that moment - I rushed to nearest Manga shop and I was “reading” the manga’s ending right next to cashier, asking him to translate the text for me (poor soul). That was beautiful!
Finally, now in 2020 I am able to read it fully in English and reflect on what I felt back then. Only one thing left to say: I love this story and characters very much!
Was this comment useful?  Yes

One of the best there is and ever will be
by jackalan
May 9th, 2020, 1:59am
Rating: 10.0  / 10.0
Please don't doubt my high praise (but it's okay to be a little hesitant because you haven't tried it yourself): this is and will remain one of the best works ever written on personal life, work-in-progress, growth and love.

Throughout, it stays true with its genres and demographic. It provides clarity and resolution even when I think there might be certain dramatic cliché, there aren't.

More on the romance: if you have ever feel frustrated or swept away by some strong age-gap stories, this manga will clear out your heart and mind (like the last panel of a blue sky).

More on personal progress and growth: it never shies away from inner struggles and conflicts, despite being subtle. It is focused and full of positivities. Because it's life (and mostly these people are okay-doing middle class), you'll find a way forward.

It is such a feel good story! The art is consistent and impeccable through out. The author has another manga out based on the location Kowlon, Hong Kong. Thus far, it pales in comparison to this work, especially the intentions, the message and the thoroughness of delivery. (But maybe they differ by intentions. So if you enjoy both, good for you.)

Hope you guys will enjoy this as much as I do!

Banzai to author-san, to the translation team. This is one of the deserving award winners in the history of manga awards, ha!
Was this comment useful?  Yes

I highly recommend!
by Anonymous
February 24th, 2020, 11:22am
Rating: 10.0  / 10.0
The way Mayuzuki Jun handled the premise of this story, it was executed amazingly! The art is amazing and unique. The story explores passion of interests and realism (to the extent that a manga can) as well as making the story and characters loveable and unforgettable.

Why are there no more updates over this manga?
by Akiraismyidol
January 10th, 2019, 4:51pm
Rating: N/A
I’ve been reading this manga but it stops short in Volune 8 episode 58. I haven’t been able to find any more English versions of this manga and I’m getting really worried. I absolutely adore Koi wa Ameagari no You ni and I want to read more of it. Someone please light my way on where I can find and updated version of this. Thank you!
Was this comment useful?  Yes

and the art was good too

age gap story like this always show us that love is a complex thing , like a labyrinth and in the end we will realized, love is simple, it is not about how people see us ,it is about how we see ourselves.
Was this comment useful?  Yes

Realistic Characters
by eminaagnam
May 28th, 2018, 6:14am
Rating: N/A
Has a realistic feel to it (at least as realistic as these kinds of manga can get). Like the main character has more depth to her than meets the eye and the manager isn’t a saint. Often times, I feel these types of manga go for the male lead as being extremely pure and noble. But the manager isn’t completely that. Noble, yes. Pure, no. I appreciate that reality.

The art style is great but the cover on this page initially turned me off. It looked too freaking sparkly and chipper- not at all like what the heroine is like. I wish manga would take more risks on portraying the covers better. Thank god I read a few reviews and decided to read it anyway.

The heroine is cool and stable, but she still feels human. She has bouts of depression, cheerfulness, and is very honest. No beating around the bush for her which is AMAZING. There's vulnerability in being honest, so I admire her very much for this.

The male lead is NOT a "27 year old hottie that looks 17 and acts 17" (though I am reading a manga that has this exact premise and I'm loving it because it's also a great comedy.) He's 45, a pushover, but honest in his own way. He KNOWS he doesn't have much to offer or have ambition, but he is kind and honest. My heart clenches for them both.

The story moves at a wonderful pace. It doesn't take 50 chapters to get her to confess. The things that happen along the way and AFTER her feelings are out in the open are... realistic. Realistic but with quirky, fun things also thrown in. It's such a good manga. I've only read up to Ch 51 but there is a lot left untranslated I'm looking forward to. I know I'm going to cry when it's over, and rearead it a hundred times.

I have never seen a live action adaption from a manga because I cringe at stuff like that... but my heart is weak against this manga. I'm seriously considering watching it, man.
Was this comment useful?  Yes

Could Go Anywhere
by cecropiamoth
February 21st, 2017, 6:26pm
Rating: 10.0  / 10.0
This story has many possible arcs it could follow, but it's so well written and drawn that I think it can be trusted to handle whichever one it chooses well. As in very many manga there is a transgressive element here, a kind of element which the Japanese seem very good at inserting in their stories. The girl is a teenager and the man appears to be in his late 30s or early '40s. What seems, so far, to draw them together is that they're both smart, or at least given to thinking their actions out carefully and thoroughly.

I like Japanese transgressive elements like we have in this manga! I've heard it said that the Japanese are so obedient to all social rules in their real lives that the intensely need a bit of transgression in their stories in order not to feel entirely smothered by convention. Whether that's true or not, the small transgression here opens out the story and makes it likely that what happens in it will not be standard fare.

I look forward to the development of this plot far more than most.

Refreshing Age-Gap
by Day Dreamer
February 18th, 2017, 10:43pm
Rating: 9.0  / 10.0
I'm a sucker for age-gap romance manga, so this story pulled me in from the start. It is about a teenage girl's crush on her much older boss, and although it's been done before, there is definitely something very unique about the two main characters and the story exposition. The art is beautiful as well and reminds me of 80s/90s manga!

Female lead: She's athletic and beautiful, sure. But, more than that she's inquisitive, strong-willed, and determined. She has a consistency about her that doesn't waver when something unexpected comes her way.

Spoiler (mouse over to view)
Although there is a short arc in one of the earlier chapters where she seems out of character. It's the part where her coworker blackmails her into going on a date with him, threatening to reveal her doodles about the boss. She gives in and goes. But she already told the boss her feelings by then!

Thankfully this arc was finished within a chapter!


Male lead: He's not handsome, wealthy, or extremely intelligent per se. But, that's what makes him so interesting. He's fairly average. And that's okay because more importantly he's passionate about a hobby, hard-working, and kind. Sometimes these traits can carry people much further in life than money or beauty.

Highly recommended for fans of romance and slice-of-life!