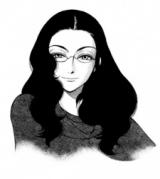 Created doujinshi about British maids before her debut, under the penname AGATA Fumio (県文緒).

Started to draw in high school. Her first work was Emma. She refers to research and academic theses for her work.

In 2005, she received an "Excellence Award" from the Japan Media Arts Festival for her manga "Emma".
In 2012, she received a French award "Prix intergénérations du festival d’Angoulême" for her manga Otoyomegatari. She is a woman who decided to pen mostly seinen manga which is rare in the industry.