Login to add items to your list, keep track of your progress, and rate series!
Description
A spin-off work starring Kamui, one of the main characters of Kamui-den.

The first 2 volumes were published in a Shounen magazine and ended with the 20th chapter in 1971. The manga changed art style and direction when it switched to a Seinen publication in 1988. The violent and sexual explicit part of the narrative was the basis for the American adaptation by Eclipse Comics in the 1980s and its unedited Viz re-release in 1999. 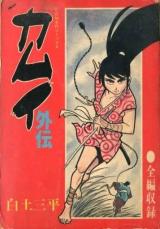 The older Lone Wolf and the slightly better
by residentgrigo
February 15th, 2015, 8:34am
Rating: 8.5  / 10.0
This classic chambara (if i can call it that due to Kamui´s profession as a ninja) is important to the field of Seinen but only the slightly later published Kozure Ookami (7,5/10) and company are know outside of Japan. These were released in their entirety after all but Kamui barely got a chance. Only the short Viz version is know today but the Eclipse Comics translation further content in the 80s (the added history editorials are great) but they took out some of the darker sexual elements as the frequent scenes of rape and the entire manga is very NC-17 in all aspects.
These elements are handled with way more care here than in Koike´s frequently exploitative narratives but mass market audiences are destined to run away screaming. Lone Wolf is certainly Koike´s best manga and both series are similar in most aspects. They even share comparable problems with length but Kamui remains superior in basically all fronts but the ending which Koike managed to muddle in the end due to the glut of inferior sequels. Sanpei Shirato and Goseki Kojima are both phenomenal artists of true grit but Shirato dared to feature a lot of very unappealing nudity by old or and ugly characters which grounds Kamui´s world way more but most readers will again be appalled by it. The hardest selling point is the titular anti-hero if you are a newcomer to the genre.
He may interacts will all sorts of people along the way but always stays a step removed and never settles down.
He lets women touch his skin or lay besides him but he refuses to go further despite an attraction towards them.
He searches and searches and even becomes somewhat unsympathetic along the way (his slasher smile is comparable to a certain Berserker) but real answers aren´t found in the end and the journey continues in the sequels. The protagonist is even absent for of half the series but that only adds to the mystery and flavor!
The well researched historical background of the 17th century is a barely paralleled marvel in execution and the dynamic action scenes haven´t aged a day. The series release history is further quite confusing as this version of Kamui originated in a Shounen magazine so expected different content and art in the early volumes.
These barely connected exploits are comparable to the youth friendlier prequel or the 60s anime which aren´t required reading and the series unsurprisingly turned a corner when the magazine changed.
The moody art, the high amount of sex + violence and the lofty narrative ambitions were a result of that redirection.
It is a shame that the series still has to get a complete English version out of the door and the gekiga masterpiece isn´t without flaws as i mentioned but neither are it´s modern brothers in arms as Azumi (9/10) or Mugen no Juunin (8,5/10). I lastly consider the youth friendly Rurouni Kenshin (10/10) to be the high point for this solely Japanese art form but Kamui´s tale is one for the ages nonetheless.
The author continues to tell the occasional tale about him to this very day and i wouldn´t have it any other way.

The older style art makes it rather hard to follow at times. The fighting is so-so.

Mature for breasts being seen all over the place. But, due to the art style, its not ecchi in the least. The author seems to want to show you the reality of history.
Was this comment useful?  Yes