In 1998 Ayashi no Ceres won the Shogakukan Manga Award for shoujo. 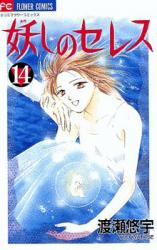 If DRAMA is what you seek...
by Utsukushii Yume
May 3rd, 2020, 8:31am
Rating: 5.0  / 10.0
So I remember reading this as it was coming out back in the day, and truthfully I have no idea if I even finished it. I am certain I did, but I can't remember. Not because it was bad, but because when I think about it, there was just so much stuff going on, and the brother was being weird and a whole lot of other craziness going on.

I was thinking I should go read it again to refresh my memory for this comment, but something always tells me that I shouldn't do that. I don't remember hating the manga, but I didn't exactly like it. I remember it was really dramatic, I wasn't crazy about the female lead, and the brother was being weird.

Spoiler (mouse over to view)
She used Yuuhi as a crutch for the majority of the manga, pining after a guy who she had only briefly met on a couple occasions. They tried to explain it away like oh it's fate because he had her mana all along... The romance was just poorly done imo. They left it with an open ending *Tooya* "like oh hey I might die or I might not buy hey I want you to wait for the day that I die so that when I do you can be with Aya as my replacement." To Yuuhi..eww is really all that comes to mind for this manga..just eww..

What a joke...
by moonmystery
May 10th, 2016, 8:52pm
Rating: 1.0  / 10.0
This series was a melodramatic trainwreck that just got worse and worse. How does anyone read through this sh*t? I got absolutely bored by chapter 35, and skipped to see the ending. Yup, still terrible. Hated every bit of this manga.

I started reading because i wanted to see how bad this is, and wow it's pretty terrible. None of the romance makes any sense whatsoever. It's all just wish-fulfillment. And it still sucks.
Was this comment useful?  Yes

For 13 volumes, her body was to satisfy every man's lust, whether they are good or bad men.

if you are into these kind of stuff, you will definitely love it

then theres the final volume for the revelations and conclusions, just to give it an end

it was weird, the title is so wrong, "Aya the
Spoiler (mouse over to view)
Slut" wouldve been much better

A bad soup! if u know what i mean! LOL
by mimi639
September 5th, 2012, 2:32am
Rating: 2.0  / 10.0
The story could have been better.. and the holes in it were many, and always around the corner..
it started bad...went worse..AND suddenly everything and everybody went bananas, and it got interesting

(lol im so cruel i only liked it when everybody was miserable), but the the whole:
Spoiler (mouse over to view)
"Honey guess what?, i'm half-fish kind of thing or i dunno really what i am kind of plot".. .-.- just was Hoorrible! and simply pathetic...i mean?? REALLY?...
is this finding Nemo mixed up with the little mermaid meet Darwin's evolutionist theory on drugs or what?! :haha:
didn't really get why the ocean was so involved on the past and birth of Tooya, but whatever -.-'

The love story..."all u need is love", <3 that's what they say, but this one just went DOWNHILL!
too fast, too FAKE and cheesy too my taste! , any pink-and-bubbly shoujo will be proud LOL,
no offense, i've had my share of shoujo, and i think i know the subject!
(and i can't believe i'm gonna say this but... i've seem BETTER shoujos! LOL
and that genre has his own failures! and BELIEVE ME! i've seen them all!

the truth is that the girl is annoying, well...REALLY annoying.. AND stupid... AND makes more drama than a mexican soup opera!... :'(
the boyfriend has no feelings- then he has them- then he doesn't, then he doesn't know if he has them,... and so goes on and on...¬¬
(his brain is sooo f*ck up, that i'm surprised that he even remembers his name!)
and all the other characters just keep on dying!... so funny LOL!
cause everytime one of them dies it was like a scene on a bad drama movie like (when they kill the girlfriend of the protagonist and he just kneels on the ground and looks up into the sky in the middle of a lonely streat, (with pouring rain of course), and screaammmsss "WHYYYY?? ooohhhh whyyyy??" -.-' ... and latter the tippical "take me instead"- kind of crap?...¬¬
weeeeeell eeevery time !! damn!! soooo stupid!! but i laughed when it happened so.. i won't complain

the truth is that i imagined that they will
Spoiler (mouse over to view)
got her pregnant around the 56 episode...
so.. i promised myself that if that happened, i would take the little dignity that got left (for thinking this was a good series), and skip the whole thing to the end,
just to satisfy my obssessive complex of not letting anything ever without finish..
And so i did.. and i must say i'm not more happy or proud of myself..

Mental note: not see ANY series you think is stupid, because it probably is girl!! listen 2 urself!

A bit about our origin
by UsoSora
March 15th, 2012, 9:10am
Rating: 10.0  / 10.0
Beautiful manga! Excellent choice for the theme. The origin of our being, the White Goddess , our separation from the nature and our great Mother...and atonement for our mistakes in the end

It was good and original... till a point. After several chapters, I just got annoyed with it. The art (I know I can't do better) was mediocre in my opinion. Then again, many mangas had this look in the past.

The story was what sold me at first, but it just seemed too dramatic and boring after awhile. The romance was one of the reasons why I just stopped loving it.

Let me just say a few words. I hate Touya... there I said it. The guy potentially being the most loved by fan girls, and I just said what any sane girl would say. (Sorry Touya fans if that comment offended you) He was too... perfect. Everyone in this manga was too flawless, excluding the villains of course. I hate characters who are brave, unselfish, and basically the definition of heroic. What makes them interesting if they don't have any quirks separating them from the rest?

The end... I won't lie to you, I just sped through because I was just frustrated and wanted to see the end. Now, I know what many will think, "You don't know if you don't read it," or something along those lines. I did read majority of it, almost forcibly.

I know it may seem like I am just only dissing this manga, so I will say a few good things that I DID like about it. I did like the idea of the plot, it was something that I had never read or heard of before. I also liked how sometimes it was sad and not happy, making it so that it seemed more realistic. (Just as a heads up, many people do die in real life, or get some other misfortune fall upon them)

Now, let's end this long review with my personal rating for each section of Ayashi No Ceres. The beginning deserves an 8, the middle of the manga deserves a 7, and the ending deserves a 6.5.
(Merely my personal opinion, others will think differently than me)

:D
by cecixiao78
December 3rd, 2011, 1:05pm
Rating: 8.0  / 10.0
I think it was great but not awesome. It didn't leave a big enough impression on me to make me want to buy the manga like some of the others I want and seeing how I can't completely remember it just shows how it's not significant or the story was just not unique enough for me to remember. I didn't remember parts of the beginning, ending, and very little of the middle. I would say it's not a waste of time to read.
Was this comment useful?  Yes

Such Drama
by silvertail123
July 21st, 2011, 9:50pm
Rating: 7.0  / 10.0
There is a lot of drama in this and made me cry a lot here and there in the story. So I really like it especially the part where Aya and Tooya get to stay together, but at the ending where Tooya said that he doesn't have much time left really ruin my happy ending moment. I mean seriously and I know that humans don't know when they will die, but when he said that he will die soon really ruined it for me. Besides that it was great.
Was this comment useful?  Yes

bluh
by Aikanaro
June 19th, 2011, 7:20am
Rating: 4.0  / 10.0
Something went badly wrong somewhere along the line. The premise is interesting and the start is promising - but what the hell happened after that?

I'm going to single out the romance as being particularly abysmal. I can't believe that these two people are in love. They keep telling me that they're in love and they sure have plenty of sex - but, well, what is there to love? The guy has no personality. It's like she fell in love with a particularly attractive brick wall. Gushing about how wonderful it is and how deeply, passionately in love you are with it is not convincing. Have they even had a conversation that wasn't about the business of the plot or about how madly in love they are? Certainly not on screen, and I can't see what they'd have to discuss together anyway.

So, yeah - the romance is thoroughly unconvincing. If they didn't keep insisting on it, I would think that they're acting, or that it's a shallow infatuation - but nope. Seems that I'm meant to believe in true love between a highschool girl and a guy whose only remarkable features are his looks and being able to kill people.

Beyond that, the pacing is bad, and the plot got lost somewhere along the way. I still have three volumes left, but it's been feeling directionless for a while. Why were half of these characters introduced, anyway? The plot hasn't advanced ... at all, really. The characters have achieved nothing and are content to fuddle around. Sometimes the villain seems to forward their nefarious (and nonsensical, poorly motivated) plan, but nothing ever really happens. The other villain stops by to posture from time to time. Altogether ... nothing really happens.

I should probably finish the rest, seeing I came this far - but I'm not looking forward to it. The romance element seems to have taken centre-stage and I'm pretty much just skimming through those pages now - they don't add anything.
Was this comment useful?  Yes