Login to add items to your list, keep track of your progress, and rate series!
Description
From MangaHelpers:
The world is in a war against an alien race called "Mimics," who have taken over most of the world with a mission to eliminate the human race. Keiji Kiriya is a new recruit in the United Defense Force, which is battling against these "Mimics." On his first day of deployment, Keiji and his unit encounter "Mimics" and are all killed... Or was it all a dream? For some inexplicable reason, after every time he dies, he is resurrected and returned back to the day before the battle. Why does this happen to Keiji and how can he escape from this never ending cycle?

Note: Nominated f... More...
From MangaHelpers:
The world is in a war against an alien race called "Mimics," who have taken over most of the world with a mission to eliminate the human race. Keiji Kiriya is a new recruit in the United Defense Force, which is battling against these "Mimics." On his first day of deployment, Keiji and his unit encounter "Mimics" and are all killed... Or was it all a dream? For some inexplicable reason, after every time he dies, he is resurrected and returned back to the day before the battle. Why does this happen to Keiji and how can he escape from this never ending cycle?

Note: Nominated for the Eisner award for the "Best U.S. Edition of International Material - Asia" in 2015. Less...


Related Series
All You Need Is Kill (Novel) (Adapted From) 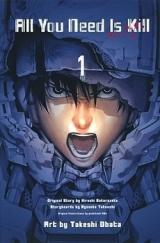 Note: You must be logged in to update information on this page.
Forum Posts Click to view the forum
Edge of Tomorrow TV Show Status Revealed
6 months ago
Theme of Unrequited Love
over 5 years ago
So just how good is this manga?
over 8 years ago
Good Book
over 8 years ago

Good but not great
by Theoneyedsnake
August 14th, 2020, 9:54pm
Rating: 7.0  / 10.0
The art was really good, and in the beginning the story was great. Although, at some point the story felt rushed and the characters felt like they became flat.

The story was based on a one volume novel with the same name. There was probably a lack of content to work with to make a fully developed story.

Side note: they made a movie of this novel/manga which I personally enjoyed more.
Was this comment useful?  Yes

Short and sweet
by Kraniak
June 24th, 2017, 2:12pm
Rating: 9.0  / 10.0
So many manga overstay their welcome just to keep the serialization going. While I feel for the authors who are trying to make a living, the best manga tell their story and end it there. This manga perfectly embodies that, the characters are developed and the plot resolved. Excellent story and art, looking forward to reading their further series.
Was this comment useful?  Yes

Exhilarating read
by fwoom
January 21st, 2016, 2:59pm
Rating: N/A
The characters fall slightly flat of distinct personalities, but given the interesting situation the main character is caught in it's not a huge flaw, as the story itself is exciting and intense to read. Awesome artwork too from the artist of Death Note - the mimics look grotesque.

Overall the whole thing reads like a poignant, intense poem more than it is a full novel. Would recommend.

For a more in-depth review and recommendations to similar works check out the full review on my blog here! - http://www.foxymanga.com/manga-review-all-you-need-is-kill/
Was this comment useful?  Yes

The Charm of the First Volume
by smokeesid
August 30th, 2014, 9:13am
Rating: 8.0  / 10.0
I wonder if it is difficult to imbibe the thrill in manga but it is rare. The feeling that I search, (Berserk is its quintessence) I found it here, with a diffused sense of exhilaration which peaked at the end of volume 1 that strictly followed a fast rhythm insinuated in its vivid artwork that absorbs the readers with increasing anticipation for a gratifying end.

And it is abrupt, the way volume 2 changes in its tone and on the contrary it becomes rather plain and relaxed. And when it ends you are left wondering in counterfactual arguments that a gratifying ending was possible and it didn't have to be shonen-like

But due to the happiness rendered from volume 1 you are settled merrily with the time spend in reading it. And thus this manga is justifiably an 8
Was this comment useful?  Yes

great beginning, but just good ending
by whitespade
July 21st, 2014, 6:23am
Rating: 9.0  / 10.0
the first few chapters make my heart throb like crazy, but the ending wind down the tension a bit so im quite unsatisfied with it. however, the story and the art is still great, though i would love very long manga, so try this for a quick exhilaration.
Was this comment useful?  Yes

Read It
by WASHinWithWAVES
July 9th, 2014, 3:48am
Rating: 8.0  / 10.0
Very interesting plot and ideas; art is amazing, top notch. The authors have a good sense of romance and emotion in the writing, some of it was kind of like poetry. Only problem I had with the manga was that it was too rushed. Some concepts were difficult to understand, but that's just me.
Was this comment useful?  Yes

good
by butako chan
June 11th, 2014, 7:09pm
Rating: 7.8  / 10.0
I thought it was a good read, though a rather short one. The art from Obata Takeshi is great as usual and the plot was intriguing. One problem I have with this manga is the major plot hole towards the end.
Spoiler (mouse over to view)
It was emphasized that Rita is not part of the network that Keiji and the mimics are part of as she resets every time Keiji dies. In that case, she shouldn't have had to fight Keiji to determine who would survive the loop as she was never part of it.
This plot hole really draws away from the ending of the manga. Plot hole aside, I feel like the ending was also rather rushed. The characters themselves aren't very unique. They're likeable enough, but seem to lack any real personality. It was a good read overall though and I would recommend this to anyone.

Meh...lets hope the movie is slightly better
by Faukner
June 10th, 2014, 6:00pm
Rating: 8.0  / 10.0
It was okay. I think they could have done more with the premise. It was very basic if you think about it. And by doing more I don't mean putting out 20 volumes of this story, I mean they could have made some things clearer and added a bit more depth to the story. Anyway art was great(obviously look at the artists name) but the story was so-so. The light novel is probably better but I'm not really a light novel person so lets see how the movie ends up.
Was this comment useful?  Yes