Login to add items to your list, keep track of your progress, and rate series!
Description
From BL-Gyaru and Must Be Endless:

He hit me again today. My lover Kan-chan, that is. But that doesn’t really matter. My love is being rusted by our bodily fluids. Mayama, my middle school classmate, has appeared before my rusted self and become conscious of my bruises and scars. But you want it to be like the past, on that rainy day you kissed me and froze… I won’t be satisfied with a naïve love. Drawn by Ogeretsu Tanaka, this is a story of true love and pain.

He hit me again today. My lover Kan-chan, that is. But that doesn’t really matter. My love is being rusted by our bodily fluids. Mayama, my middle school classmate, has appeared before my rusted self and become conscious of my bruises and scars. But you want it to be like the past, on that rainy day you kissed me and froze… I won’t be satisfied with a naïve love. Drawn by Ogeretsu Tanaka, this is a story of true love and pain.

Groups Scanlating
BL-Gyaru
Must Be Endless 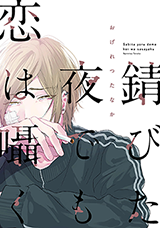 Deceiving (series review as a whole)
by Yamara
March 8th, 2022, 7:29pm
Rating: N/A
This being the "main story" is kinda a laugh lol
Basically, the entire series is about kan-san. Reading this one first has me with mixed feelings.
First off, it makes me really like Yumi and since you don't get much of an update about Yumi after this particular volume, it becomes slightly disappointing. Especially when the update you do get throws in some confusion as to how everything ends up working out for him. His story doesn't add up in the end, and since he's the first one you're introduced to in the series that attachment gets neglected basically.

Now as for kan. Obviously, you're supposed to not like him in this. And the prequel is supposed to give you some insight into what happened and make you sympathize... But it really doesn't make you sympathize. Comments on the prequel even have some people blaming Yumi but none of it was yumis fault AT ALL. He did try and ask what was happening and was told not to worry. He did try to share in the burden and was told he was useless. And he did try to fix the situation, and the situation escalated instead. The only thing he didn't do was leave, which he could do because he wanted to support kan and didn't realise he was causing pain. It's entirely kans problem, his fault, and his lack of communication.

Hmm
by Arisu06
April 29th, 2021, 5:54pm
Rating: 8.0  / 10.0
I actually really enjoy the story and I can understand everyone feeling but maybe because it's too short, the story not enough portray the consequence of abuse. But if it has as many chapter as Saezuru, I believe it will conveyed well.

And I really hate when someone say a story have a plothole while it's actually the person who doesn't read properly and don't understand, for Meilee123
Spoiler (mouse over to view)
It's obvious Kan said "You are here because it's easy and because you think I can go back to who I am when I was in high school" I know cases in which they try to endure because they believe one day the abuser will change, I know, so that's not plot hole. And it's obvious Yumi still loves Mayama since Azami because he still keep the phone, even Kan realize it, so it's not strange Yumi with Mayama. You just don't read properly. I think he actually like Kan but can't forget Mayama that's why he keeps the phone but when Mayama appear and his love for Kan also slowly disappear, the love back then come back. And you said Azami is unrealistic? please read about working condition in Japan before you say something as unrealistic.
Was this comment useful?  Yes

Kinda Confusing
by Meilee123
July 3rd, 2016, 10:17am
Rating: 7.5  / 10.0
First of all, I think the title doesnt fit the story. I kept wondering about it. The description/synopsis kinda leads you to think something else than the storyline.
Otherwise, it was kind of a dull storyline. But it was intricate though, but still could be boiled down to
Spoiler (mouse over to view)
Abusive lover, leaves abusive lover and is now happy.
Spoiler (mouse over to view)
I read the prequel first so I was more interested in Kan-chans situation. I found it contradictory that Yumi loved Kan-chan so much and suddenly it was all a lie? He could have loved both of them but it was disappointing when I read that one line, where Kan-chan said that Yumi never questioned Kan-chans actions. Which is abnormal in itself and shows that he really didnt love him. He never questioned the abuse nor the source of Kan-chans anger. I was rooting for them too. And it was the author that made me root for them by centering the story on them first, however he easily shifted the whole focus to the next pairing after I was already attached. So Yumi was just with Kan-chan because it was easy and he didnt have a way to contact his real true love Mayama...
What I dont like was that the author never gave me a reason why Yumi stayed with Kan-chan after the abuse started. This was a slight plothole. Since the author never explained this pyschology, I was left with the dull ending.
Spoiler (mouse over to view)
Also, there was a whole other psychological notion of Yumi not wanting to be protected but I dont feel that that was effectively developed either as a part of the plot. It was kind of brushed over and left without further explanation as well.
Therefore the worst part of this manga in my opinion was that all its intricateness was not fully developed and only suggested. The prequel that explains Kan-chans abusiveness was also unrealistic.
Was this comment useful?  Yes

Sabita Yoru Demo Koi wa Sasayaku Review:
First off let me say that I am now a fan of [a]OGERETSU Tanaka's[/a] works and I like her intense stories and art style. I thought this Manga was really good because it could get readers engaged and feel bad for the MC getting beaten by his boyfriend. Sometimes I thought the plot was kind of lacking, or stretched because all the problems could have been worked out with a conversation between eachother, but that's just me. Another thing that I noticed was that the other staff in the MC's job didnt find it at all strange when he would show up hurt saying it was his boyfriend. They did nothing about it and dismissed it. Other than that I really liked how the author is so good at showing diffrent point of views for the characters and how once you read all the parts to the series it all makes sense/brings it together to make it really powerful.

Spoiler (mouse over to view)
In the prequal Asami, you get to know the back story of Hayashida Kan and see the reason why he's beats the MC. I feel bad for Kan-chan but it doesn't make it ok to lash out at people. And when he burned the MC with the cigarette + when Kan was going to beat up the MC when Mayama (the MC's lover and now boyfriend) was around that was brutal. Thoes parts really stuck out to me.

Spoiler (mouse over to view)
It's sad that in Renai Rubi no Tadashii Furikata you get to see what the after affect of abusing your lover in Kan's perspective is.
I wish Ogeretsu would have added an extra story like if Kan and his new boyfriend bumped into the MC and Mayama later on when everything simmered down. That would have been a good ending.

Spoiler (mouse over to view)
My favorite part in this was when Kan-chan let Yumi go. I would never have expected him to do that with the way he had behaved throughout the whole manga. That was a good expression he made. It was at that point that I felt for him. He came off as such a mean jerk. I was really touched(and tears welled up, perhaps I've just been more emotional lately).

I'm looking forward to reading the spin-off too.
Was this comment useful?  Yes

The main downside was that the consequences/effects of having had an abusive boyfriend were not fully dealt with. Sure, that chapter of the MC's life came to a proper close but what of the repercussions on his self esteem, mental health?

Maybe the related sidestory will address this.
Was this comment useful?  Yes

really good art!!~
by Maria-Ayako
September 10th, 2015, 11:54am
Rating: 8.5  / 10.0
It was good but i would love to see more of the sweet couple <3
The art was good and mostly it was great in the sex scenes!!~ they were sooo hot!!~
And i liked even the bloody parts!! And it was nice that the bastard kinda might have turned into a better person. And Yumi got happiness and the love he deserved!! It was so cute to see him happy and he was sooo adorable at the end!!!
Was this comment useful?  Yes

Simple and cute
by Nobiwa
August 2nd, 2015, 9:14am
Rating: 7.0  / 10.0
Some things were solved very easily... but at the same time it's some kind of justice because the main character has happened for SO MUCH, he deserves that relief
I really like it, but it wasn't the manga of the year XD
Was this comment useful?  Yes