Login to add items to your list, keep track of your progress, and rate series!
Description
Three years ago, in the land of Reinbulk, a Legendary Hero was summoned in the Kindom of Leezalion and he succeeded in repelling the Demon King. Now, five students are summoned back into Reinbulk by the Kingdom of Luxeria to fight against the Demon King and the demon army. Unlike the other heroes, Yashiro Yuu has no magical affinity and the Luxeria Kingdom has no intention on acknowledging his existence or returning him to his world.

However, Yuu is actually the previous Hero that had fought the Demon King. Moreover, he is perplexed at the situation since he knows the Demon King has not retu... More...
Three years ago, in the land of Reinbulk, a Legendary Hero was summoned in the Kindom of Leezalion and he succeeded in repelling the Demon King. Now, five students are summoned back into Reinbulk by the Kingdom of Luxeria to fight against the Demon King and the demon army. Unlike the other heroes, Yashiro Yuu has no magical affinity and the Luxeria Kingdom has no intention on acknowledging his existence or returning him to his world.

However, Yuu is actually the previous Hero that had fought the Demon King. Moreover, he is perplexed at the situation since he knows the Demon King has not returned since he sealed him. If the seal was ever broken then he would be automatically summoned instead of normal summoned. Since he already saved the world once and the Demon King hasn't been unsealed, Yuu decides to leave the demons to the new heroes and retire from the Hero business. So he decides to become an adventurer. 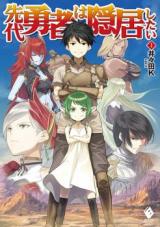 Too perverted mc
by leecher king
February 19th, 2016, 1:04am
Rating: 1.0  / 10.0
The Mc is being controlled and easily dances on the first hero's hand, while the third hero takes all the credit for the mc work & all the harem. The mc is also so pervated that he even goes after married women. So yeah this novel ain't that great for me atleast
Was this comment useful?  Yes

Potential but sadly no
by NomangaNolife
January 30th, 2016, 12:59am
Rating: 1.0  / 10.0
Spoiler (mouse over to view)
This is a story of our retired hero being called back into the same world he was once in before but Instead of focusing on the Mc (Well it does) this is basicly like the hero doing the behind the scenes work as the people he meet will not stay with him long and move onto the 2nd hero who got summoned just like him. And the reason as to why is because he's being used by the Original hero who is living like a boss but instead of doing anything he himself is retired but has our Mc here do work saying he has no way but to do them since he has powers that allow him to see through time or something idk probably not and these jobs end up helping the 2nd hero but the companions Mc make leave and get together with 2nd hero resulting in a harem and sorts. and since up to chapter 93 I find is annoying as how he won't be able to find someone to fall in love with well I do hope he ends up with the Sister...
Was this comment useful?  Yes

So far
by Sircus
November 9th, 2015, 11:13am
Rating: 1.0  / 10.0
Even when you have all ingredients to make a cake it doesn't always become one. This story has all the elements to make great story but unfortunately it isn't used/combined in any way that would make it good.

To summarize, You would have to pay me to read this story willingly! Reading this trainwreck of writing doesn't have any appeal at all.

Congratulations writer, you have gained a skillpoint in poison cooking by cutting an apple!

Ughhhh
by Bakanomaple
August 19th, 2015, 11:10pm
Rating: N/A
I think it's poorly executed. This synopsis is essentially the same as a normal summoned heroes story where one leaves the pack. The only difference is that this hero, who left the pack, is an retired hero. Though, it doesn't change the fact that he ends up playing the role of a hero and saves the world. And that just took everything away from being a retired hero and the odd guy, who isn't suppose to save the world directly.

Dunno how it goes later but from where I stopped, he was just your average hero, who claims that he isn't the hero but actually does hero-like stuff. So yeah, really disappointed.
Was this comment useful?  Yes

Spoiler (mouse over to view)
First the MC is a retired hero which most reader failed to remember
As someone who is already retired he is free from the obligation of being a hero
BUT!
He ended becoming a puppet to the First hero (The MC is the Second) and became a back up character for the current HERO!
The First Hero who is now living luxury and ruling behind the shadow while manipulating the MC
The Current hero as always spreading his stupid sense of justice while collecting lots of lots of girls to add into his harem. (Yeah the harem is for the New HERO Main Character doesn't get any girls) it sucks to be the MC of this novel

The Enemies are real OP and the new hero can't even defeat anyone of them alone
while the MC can easily fight them yet who is the main character of the story?

Volume 2 has been done TL
yet I am not really impress what so ever
so I am not expecting much in Volume 3
Was this comment useful?  Yes

Not perfect but interesting.
by sufod01
June 10th, 2015, 1:33pm
Rating: 9.0  / 10.0
A pretty interesting story about a former hero summoned back in the other world. He have already finished his job as a hero,so he let the new hero take the new job and we will follow his adventures around the world not as a hero but a "normal" adventurer because he didn't enjoy the other world previously. He wil meet some new faces and sometimes his former allies and enemies.

Potential you say... What potential?
by Aloha1
May 26th, 2015, 9:00pm
Rating: 2.5  / 10.0
I agree with somewhat with pomoli. This would definitely have worked somewhat better as a dumb ecchi manga. Because even for a web novel, and the expected lower standard compared to normal LN (not to mention proper novels) they usually have, this one is has to be one of the worst out there. It feels like it's written by a 15 year old for a school project or something, and not by a talented one.

The worst part is probably the translation (the horrible flow of the story and words doesn't exactly help either). And it's not solely a problem with this particular one, a lot of amateur translators fails at this. Sure, they do it for free, so that we can read stuff couldn't do otherwise. Don't get me wrong, I'm truly grateful for all the great anime and mangas I've read over they years which I could't do otherwise. But I'm not Japanese and I DO NOT want to have to read every 5 to 10 words in Japanese. And please, please try to keep the Japanese honorifics to a minimum, it's extremely frustrating, even if I do know what the words mean individually.

One of my favorite authors is Haruki Murakami, and if I had to read lines like in the spoiler below, (taken from the chapter 8) I would have thrown the books away in pure disgust after 1 chapter, instead of loving them.

Spoiler (mouse over to view)
"…………So it was nothing but a pipe dream. Sherry-san’s husband is a brawny muscular macho after all. He was the “I won’t let you wait long” type of husband. Gusun (sob).

Remembering Sherry-san’s words, I get confused.

「Yes. ……It looks like Lili-chan has taken a liking to Yuuya-kun after all. ……And most of all, it’s because I’d feel relieved if she’s with Yuuya-kun.」"

Would be an OK comedy manga...
by pomoli
May 26th, 2015, 5:42pm
Rating: 4.0  / 10.0
...but it's definitely below than average as a WN.
The writing emphasizes the Hero's pervert nature, but it felt more pathetic than funny. Especially since in next chapters the author wrote more and more about it. In a manga, that would be funny, but in a book, this just feels... dumb. And increasingly annoying as the story progresses.
The first chapter was promising, with a good general idea, but it quickly went downhill after because the author simply doesn't have (yet?) the talent to build on it.
What a wasted potential.

The main character is completely erratic. From a confused, ex-hero in the beginning, to an aloof adventurer, to comedic high schooler, to a serious badass all in the span of one volume.

There are other characters, of course, but why even bother talking about them? A stereotypical hot blooded shounen boy and his harem girls that are repeatedly stated to be more powerful than than the main character AT HIS PEAK. Not like it matters, the story barely mentions them, so why should I talk about them?

There are plot devices thrown around everywhere (former companions/associates of the ex-hero) but they're quickly dropped or ignored (the main character's motivation is literally to enjoy himself in the world, fuck all else.)
Was this comment useful?  Yes

Had a lot of (unrealized) potential
by bobIV123
April 5th, 2015, 12:19am
Rating: 4.0  / 10.0
It had an interesting premise, OK comedy, and some characters that could be interesting to explore; however, it didn't do much with it. It had potential, but in almost 40 chapters relatively little happened and a few characters basically disappeared from the plot entirely.

It's certainly not the best thing I've ever read, but it's ok and has the potential to get significantly better. One major asset that makes this a realistic possibility is that the author is very good at showing rather than telling, which is fairly rare and can produce great works.

Who knows, maybe this just has a really slow start, it does indeed pick up the pace a fair amount after about 20 chapters, the future of this novel is unclear to me.