Login to add items to your list, keep track of your progress, and rate series!
Description
Living, isn't easy.
When Haruhito awakens, he's in the dark.
He doesn't know where he is, why is he here, and where he came from.
Around him there are several men and women who have the same circumstances.
Together, they advance forward away from the darkness, and a world they've never seen before called "Grimgar" spreads out before them.
Memories, money, special powers — This is the reality we who have none of those things have obtained. 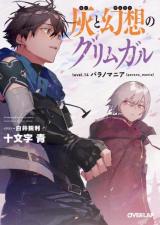 Downhill
by RoxFlowz
September 13th, 2016, 3:45am
Rating: N/A
Finally dropped this after 8 volumes. Grimgal is a different take on the isekai trope, where our main cast is not somehow blessed with superpowers or are natural geniuses. Grimgal tries to be more realistic and portrays the difficulties an average person would encounter in a foreign world with a relatively harsh environment.

As was often mentioned, the plot progression is very slow. This is not necessarily a bad thing, but after 8 volumes I'm still not sure where this is supposed to go. The biggest weakpoint are however the characters. While they actually grew on me quite quickly, there is hardly any development except a little for the protagonist Haruhiro.
What Grimgal is lacking is meaningful dialogue. Outside of hunting they hardly talk to each other, and when everyone is together it's always the same antics from the first to the eight volume. There is no feeling of the party growing together or even any of the side characters growing.

Grimgal had a nice concept, but there's a limit as to how far you can go with just that.
Was this comment useful?  Yes

Slice-Of-Life + RPG World
by sakirol
May 15th, 2016, 5:52pm
Rating: N/A
I like it. Generally RPG-setting LNs have several things that I hate: 1) "OP" main characters who basically doesn't have to try, 2) no death or seriousness to death, and 3) overbearing harem.

Characters in Hai to Grimgar grow, and not in a spontaneous nonsensical manner, They start off incredibly weak. Then they experience tragedies and really close calls as they grow. They aren't OP. The trope where the MC basically breezes through everything because he's "special" doesn't exist in this novel, although he does have a special skill that they are gradually building upon. The MC's character growth is especially good. You can see how he changes/tries to change over the chapters due to necessity and survival, and his insecurities in contrast to the front he puts up really hits home.

There's death! One of the worst things about RPG world novels and manga is that death is trivialized. Dead people come back to life or deaths are brushed off to the side as trivial in comparison to other items. Here, if a character dies, he's dead. It makes the fighting and the close calls that the characters experience much more personal and realistic. I especially love the way they use healing. Healing gave parties the false illusion that they were safe even if they were really close to dying, but suddenly if the line is crossed or if the healer runs out of mana, then reality strikes, and the party is in deep trouble.

BUT unfortunately, we have not escaped the overbearing harem.

One of the weak points is that there are random daily life chapters that I really don't care about.
Was this comment useful?  Yes

This is not a story about weak to strong. This is a story about people lacking common sense (writer cop out) and how they suffer for it. Fish floundering on land is a good metaphor. During this so very very slow story progression you will read how the retarded characters gain common sense. Apparently this is called plot progression. *ROFL*

Weak and strong points
by rhin33
February 5th, 2016, 3:01am
Rating: 8.0  / 10.0
The story is kinda predictable and the pace is slow. The writing makes characters development and inter-thoughts main priority but the characters themselves aren`t necessary likable which backfires as a whole - the main characters manage to piss me off one in a while and I don't mean only the curly head.
The strong points however are the relative realism of the story and especially the underlined themes that will probably became apparent in latter volumes.
All in all I enjoy the novel despite the flaws. That`s because even if the characters are annoying there is a meaning to them being that way, despite it is slow the story progress non-the-less and despite being somewhat predictable the writing is engaging enough to makes you keep reading.
Good novel

Now, onto singing its praises! The combat is interesting and has a visceral feel you don't get in many other works. You really get the sense that there's a lot on the line, it's a fight to the death and one wrong move could easily spell someone's demise.

The characters are very interesting: they have unique personalities with a fair amount of depth and the author is good at showing this depth rather than just telling us about it; I'd even say he's exceptional compared to the other authors who write about "some people transported to another world." The MC in particular feels very real, in particular when it comes to trying to come to terms with his harsh reality as well as realizing his own weakness. Personally, I find that I really "care" about this MC, which does happen in other LNs, but is a very good thing nonetheless.

Additionally, I feel like this work is showing a kind of story I haven't seen much of: the story of the people outside the spotlight. The protagonists aren't a bunch of Ichigos and Narutos, the world does not revolve around them; they are not the saviors of the century's end, they're a motley group struggling to survive in a harsh world while slowly improving themselves and their situation.

I would definitely recommend you read this, at least up to when they fight their first goblin (chapter 8), it's certainly worth it.

I love it
by BlackOrion
February 8th, 2015, 9:12am
Rating: 10.0  / 10.0
It feels more like a mixture between a regular fantasy novel with a light novel than just a LN, only 15 chapters out, at the time I wrote this, yet it is already a favourite of mine.
For a change on the usual "taken to another world" story we found ourselves looking trough the eyes of a bunch of normal kids, with no recollection of their past life as an advantage and no kind of talent for fighting either to make it worst. They struggle to survive day by day while trying to grow in a realistic way, winning losing, going home with their hands empty sometimes, which could mean having no meal that day.
The novel manages to give us a classic JRPG feeling to it with out taking realism from the daily fights and challenges the protagonist go trough.
Was this comment useful?  Yes

tooooooooooooooooooooooooo slow
by archknight
December 21st, 2014, 2:35pm
Rating: N/A
i feel this story progression too slow for me to like. It is really boring for me to keep reading and i feel my attention shifting when I do try to give this a chance. Maybe I just don't like this type of story because it seem to drag on and on about what is happening.

Overall I do like the concept, it just doesn't seem that interesting to me yet.