Login to add items to your list, keep track of your progress, and rate series!
Description
Miyuki Umino was a senior in high school. Although Miyuki, her two younger brothers and her younger sister were poor, they were happy living together. But, one day all of a sudden her older brother's debt of 250 million yen fell upon them. To pay back the debt Miyuki quit school. What was the incredible choice she took to do this? 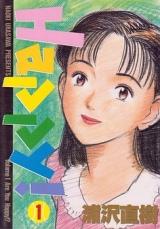 Note: You must be logged in to update information on this page.
Forum Posts Click to view the forum
Can't find Yeti Scanlations anywhere on the internet
over 8 years ago
The Idea Umino is Stupid
over 8 years ago
Thanks, HappyScans!
over 12 years ago

I'll skip all the serious thought on this story, but only I just want to question...
by xadako
August 12th, 2022, 3:51am
Rating: N/A
...the ending. What? What. just. happened?
Spoiler (mouse over to view)
How the eff did Sakurada ends up with Ruby? All those 200+ development, even him winning the heart and support of Okiku and Keichiro? Even when they promised to eat curry together? Stolen by a random side character who appeared to be a plot device so they can save the hostages in the last 20 chapters? Hellooooooo? You may say it's more rational because of the bad side he did during his work in the "underground" world, or that she's still supposed to be a highschooler blahblahblah, hence why they didn't end up together. Or that's just how this manga is supposed to be; being a satire to the title itself. Yes, world doesn't always work your way, or that reality is not some nicely plotted romance. Still though. HELLOOOOOOOOOOOOOOOO? I've never feel so grealtly dissatisfied. l.o.l.
well if I force myself to believe it, the only connection Sakurada and Ruby has is when he saw Miyuki's running spirit reflected in Ruby when she's chasing after him

But with how rushed the closure is I guess it's just wrapped it up in a weird and one-sidedly dissatisfying way
Was this comment useful?  Yes

Wore out its welcome...
by MightyMaeve
May 10th, 2018, 11:01am
Rating: 2.0  / 10.0
Engaging start, with interesting characters and a compelling situation, but after five volumes nobody has had any character growth and the plot merely repeats over and over. The characters have diminished into stereotypes of cartoony evil vs good. For example, the yakuza fellow who started to become a real fleshed-out person, all but disappeared from the story, and the son of the one-dimensional evil mother remained a weak-willed pushover. Even the main girl, whom I really rooted for, just stagnated. And don't get me started on the manipulative Choko. She was so villainously cartoony it was awful to read. And ridiculously, frustratingly flat.

Abandoned at volume five (out of 15).
Was this comment useful?  Yes

Good storyplot, but just damn too depressing
by HanaTenshiHimeko
April 11th, 2014, 6:11pm
Rating: 5.0  / 10.0
Storyline is good. Very good. Just that there's TOO MUCH bad things happening. If there a happy moment, it got snuffed in the next 2 pages. I hate the rich MC guy, the villains are too many to count, her siblings are those I wanna hit some sense into them, and I'm getting depressed with every chapter. Even though the theme is to keep fighting no matter what happens, I'm just feeling too stressed out to even continue this manga. And even if she does have some allies that have her back, more than half the time they can't help her because of the roadblock the author presents into the story. So on top of the helps that can't be delivered, villains are pecking the poor girl, and it seems everyone is against the MC girl because of a stupid word-by-mouth lies. I mean, hello, shouldn't there be more people who will be like, "I won't believe until there's concrete proof"

So I'm dropping it. If you guys want to give it a try, go ahead. But better prepare a bucket of ice cream next to you 'cause it's gonna be a frustrating ride.

If i read a drama, i want it believable
by matteroffact
March 15th, 2014, 1:20pm
Rating: N/A
Urasawa's manga are usually incredible exhibitions of how to control the pace of the drama and how to develop interesting characters over a long and complex arch. Pluto, Monster, 20th Century Boys all have this characteristic and are amazing because of it. This doesn't come close.

First off, so many of the characters are impossible to either believe or care about. The villians - Choko and Mrs. Otori are so one dimensional that they just inspire loathing and present the same stupid tropes over and over again. And even some of the protagonists are irredeemable. Miyuki is too naive for words, Otori senpai is worthless trash who you can't even root for. All the best characters are hamstrung by Urasawa's decision to either take them off stage for obscenely long periods of time or by locking them into narrative positions that don't allow them to blossom into the characters they seem that they should be.

more than a bit aggravating
by shilyte
March 22nd, 2013, 2:28pm
Rating: 9.0  / 10.0
why is the main character so STUPID? she supposedly got top grades in school so i'd like to think she would be smart or just a little savvy. WRONG!!! She's in the top 5 of the most gullible characters i've ever read about. Takes the blame for others mistakes, believes every thing she's told, trusts people when its obvious she really should judge a book by it's cover or at least question a situation. you would think that someone who grew up like she did would have a more realistic grasp on reality. If not for her very very aggravating personality, i would really like this manga. As it is I'm skimming to the parts where she plays tennis which is not as often as i'd like. That's where she really shines and the reason i continue to read
Was this comment useful?  Yes

Good, but not for me
by foobar
January 21st, 2012, 11:49pm
Rating: N/A
Spoiler (mouse over to view)
Even for Urasawa, this is pretty damn depressing. I have read considerable bits of Monster, 20th Century Boys, etc., but this really hit me badly. I think if I continue reading this, I would end up losing all faith in humanity and go amok.
Was this comment useful?  Yes

=D
by sighing
October 1st, 2011, 2:49pm
Rating: 9.9  / 10.0
this is the kind of manga you either love or hate but just can't like when you're too used to happy-oriented mangas. it's just Urasawa's style. the protagonist goes through thick and concrete. a must read for "good" readers.
Was this comment useful?  Yes

exciting and likable
by Hell_Clues
June 23rd, 2011, 12:55am
Rating: 9.5  / 10.0
This is another manga about a downtrodden person. But it's not a dark manga. The girl is likeable and strong. The manga's also exciting, you get a nice sense of each volume having something important in it.

Man I am not doing too well at explaining why this manga is good and deserves the score I think it does. Try it. If you're thinking of trying it or you stumbled upon accidentally, then try it. It's perfectly balanced, people of most inclinations will be able to enjoy the story.

Basically, in this world, everyone is either mean or stupidly ignorant, and being led around by manipulative people. The main character is so likeable that pretty much anyone decent falls in love with her. The art style is distinctive, not realistic, Choko, the villainess reminds me of Frieza. But despite that the girls are really pretty.

This isn't a realistic manga, despite it not having anything unrealistic. But it has strong emotions. The matches are intense, exciting, but there for a purpose, as part of the story.

Awesome? Where? Who?
by Sukets
May 1st, 2011, 11:37pm
Rating: N/A
Ok, i started reading this manga cause it has good popularity, and everyone recommended this one cause they liked ,etc. Then I started reading, and enjoyed some moments, hated others for being over used. Then this somewhere in the middle of chapters 40~50 started to piss me off...cause, seriously, there are different types of bad people, but i really cant enjoy reading this manga at all, simply because, the mangaka dont know how to think as a bad person, all he thinks is, what i can do for her overcome it with a perfect score?
Then here i read someone saying "perfect portrayal of human nature"? Oh yeah, there are tons of people that like's to use others, but, nearly no one as dumb as that gal...and this made me cant read this anymore at chapter 57.

This manga is over rated, main character appear to come straight from a shounen magazine, the drama part from a shoujo (one really bad btw).
Its not that better than prince of tennis, both of them are crap, at least PoT dont make me puke because of a moronic autor that just know how to harass and not to destroy someone...
Was this comment useful?  Yes

However, award-winning mangaka Naoki Urasawa takes his audience through a deep and emotional journey to understanding happiness - in the genius of his characters, world and art.

While he adopts a seemingly pessimistic view of the professional tennis world, he does not under-estimate the misfortune that lies ahead of a girl with a debt and a poor man's dream; nor does he sitfle the best and worst of human potential.

Happy! can be truly discomfitting as it evokes true human emotions: sympathy and glee, hatred and anger, despair and (most beffitingly) hope. In fact, it requires the reader to look beyond the inevitable emotion to fully appreciate the deeper meaning of being "Happy!" - for each of the characters, and how their happiness affects those around them.

Thought-provoking and emotive, Happy! is just one work among Urasawa's great works.

A must-read for the serious reader.
Was this comment useful?  Yes