Souka and her recently divorced mother move to a new place to start over. In looking for a school to enroll in, Souka decides to leave her preppy, private high school behind and transfers into a technical high school. To her surprise, she's the only girl student in the entire school! The first day of school is nothing like she ever imagined -- boys crashing through the window, fighting for all they are worth. One day, the school's current "Bancho" (a term for a gang leader) ambushes Souka. Determined to protect her, Yu, one of the classmates, comes to her rescue, but Yu ends up in ... More...
From CMX:

Souka and her recently divorced mother move to a new place to start over. In looking for a school to enroll in, Souka decides to leave her preppy, private high school behind and transfers into a technical high school. To her surprise, she's the only girl student in the entire school! The first day of school is nothing like she ever imagined -- boys crashing through the window, fighting for all they are worth. One day, the school's current "Bancho" (a term for a gang leader) ambushes Souka. Determined to protect her, Yu, one of the classmates, comes to her rescue, but Yu ends up in a struggle. Trying to help, Souka swings her book bag and ends up taking down the Bancho herself! What Souka didn't know was that when someone takes down the class' leader, you became the leader of that class. This wasn't a role she was expecting for herself, but will she be able to relinquish it?

Due to family problems, Hirayama Souka tranfers from a private high school to an industrial high school. However, upon entering the school, she finds out that there are 850 boys in the school, and that she is the only girl there. Apart from the great disparity between the number of boys and girls, she also finds out that gangsters still exist in this era. Furthermore, a conflict has erupted between her classmate Katou Yuuni and the gangsters. Thus begins Souka's eventful life in the industrial high school... Less... 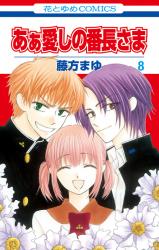 Note: You must be logged in to update information on this page.
Forum Posts Click to view the forum
Manga Name?
over 14 years ago

Aa Toshi no Banchosama lives on
by midoribug
April 17th, 2017, 9:12pm
Rating: N/A
After following some posts on the Japanese Twitter and searching around, I believe the author is back and the series is being published again *yay*
Latest update, if I read correctly

a new volume will be released in July

The March edition of LaLaDX magazine has the first chapter ~
Was this comment useful?  Yes

OMG THRILLED
by Adorbs
September 5th, 2016, 5:52am
Rating: N/A
*CRIES* I'm so thrilled that this series got updated! But, you know, destroy my dreams and treat it like dirt--this manga? Discontinued. IT HAD POTENTIAL. IT HAD THE FUNNIES

Ridiculous, but Hilarious and Cute
by bunnyteeth
August 23rd, 2016, 11:12pm
Rating: 7.5  / 10.0
This is one of the shoujo romances that stands out in my mind because I really enjoy it. It's got an outrageous, unrealistic plot, but it owns it. It never goes over the top to the point where its exasperating or becomes ridiculous to the point where nothing is making sense. It has likable leads, a cute romance, funny situations, and good pacing (progress is made on the romance front relatively quickly along with the comedy which can be a pretty rare thing for this type of manga; example: Wallflower, Tomo-chan, Beauty Pop, Special A, Ouran High School Host Club )

The thing that sticks out is the main male lead, Yu. I'm not a fan of jerky leads, flirty leads are alright, but I love overall nice guys (not princely type in this context). Yu has friends who care about him and who he cares about, he cares about his family, he's protective and sweet to the female lead, he's smart and capable, but he's also not just some bland nice guy. He gets just as much screen time as the female lead, so you get to know him, not just a stereotype. The romance is cute because both characters obviously have feelings for each other, so there's no real drama, but just fun hilarity.

It's not a ground-breaking, must-read, but it's really enjoyable and makes me smile, so if you're looking for a light-hearted, fun read, try this one out. Warning that it is on hiatus/discontinued, but I read it for fun, and it's not the type where you're dying for the ending. Enough's happened that I'm already pretty satisfied even if it is discontinued.

Note about tag: I wouldn't really classify this as reverse harem (I mean, it is by definition, but doesn't have what I associate with a harem/reverse harem). There may be a crush on the main girl by some other guys, but none of them are actually going after her. The main female and male obviously have feelings and everyone knows it, so no love triangle drama.

Nice Light Read
by Yumina-redwhite
September 1st, 2015, 6:12pm
Rating: 8.0  / 10.0
This manga is about a girl who (accidentally) became a school gang leader. She then had to deal with other groups which (also accidentally) became her underlings, the infatuation of the boys around her, and of course, her own infatuation for one of the boys (not really a harem IMO, as they already looked like a couple even since volume 1).

If you're looking for a shoujo with serious plot (like Dengeki Daisy maybe?), then you'll feel disappointed, as there really is almost no other stories outside the ones I've mentioned above, side-stories and extra excluded. The longest stories covered 2 chapters, thus you can conclude, that even the most 'serious' problem only needed 2 chapters from start to finish. Also, you can get bored with the same premise over and over again (enemies came and belittled Tokugawa/Katou, she got mad, duel, conclusion, her underlings increased). So yeah.

If you're looking for a super light read with huge portion of humor and vanilla romance (with marriage proposal here and there lol), then this is for you. It has a very interesting and promising first chapter, and the engineering high school premise alone piqued my interest, as I had never read about it before in a shoujo manga. And yes, the humor was a big plus and refreshing. I also love the mangaka's story about how she got the data for this manga from her little brother, who enrolled in a real engineering high school.

I didn't plan to comment about the art, as I know each of us has our own tastes. IMO, the art complements the comedy and the romance well.

PS: For lulu1430 and whoever met the same problem like her. The correct name is Hirayama Souka, as I believe the kanji is 平山そうか (the 'Souka' part even with hiragana here, so I don't know how they came up with 'Hayaka'). CMIIW

hugeeeeee stretch.
by countingwounds
June 29th, 2011, 1:49pm
Rating: N/A
A lot of the events/reactions/characters/everything is a big stretch. Despite that, however, this only adds to the comedic element of it, and has me laughing. Although sometimes I just shake my head and say, "Now, just why... ?" There are more moments where I am laughing at the characters actions, even though nothing is really all that realistic. It does seem childish a lot of the time, but like another person said, the romance (err.. Katou...? ahah) kind of ups the maturity level with his seriousness. And he is just so adorable with his tendencies!

So, with battling emotion on this aside, it's very cute, and simple almost? Very plain, with very minimal drama in my opinion - the drama it does have is almost in a comedic sense haha.
Was this comment useful?  Yes

Cute and Funny!
by Sailorharmony
June 13th, 2010, 1:06pm
Rating: N/A
It was a great read. Adorable, as well as funny. The artwork is better than I thought, since most covers are decieving. Reminds me a lot of Wild Ones, which is another manga I like. ^.^ I recommend this manga to people looking for a cute, comical read.
Was this comment useful?  Yes

LOL, this should not even be called a harem. I've read a manga just like this one somewhere before. but I just can't remember what it's called...

Quite pleasant
by Utsukushii Yume
July 5th, 2009, 10:11pm
Rating: 7.0  / 10.0
I find this to be quite interesting. Hayaka seems like a little child at times, but is not a whinny brat, which I MUST thank the mangaka for not making her that way. Her personality is innocent, but she becomes strong willed when it is something pertaining to someone being unjust.

She is so oblivious to what Katou is trying to explain to her, which makes this so funny.

I find this pleasant to read.
Was this comment useful?  Yes

just so- likeable.
by turnip head
June 19th, 2009, 8:14am
Rating: 8.4  / 10.0
she reminds me of Sachie from Arakure in her determination to see justice done. she's more timid otherwise. i like her. and her counterpart, Katou, is a sexy sixteen year old. while her usually passive personality sometimes makes me think their age group is more adolescent, his sexual appeal helps break that image. and it's funny seeing her frustrate him over and over. her mother! ha!

It's like some sort of RPG where you go around killing all the monsters.

Except she's not doing it on purpose