Login to add items to your list, keep track of your progress, and rate series!
Description
Narumi Momose has had it rough: every boyfriend she's had dumped her once they found out she was an otaku, so she's gone to great lengths to hide it. When a chance meeting at her new job with childhood friend, fellow otaku, and now coworker Hirotaka Nifuji almost gets her secret outed at work, she comes up with a plan to make sure he never speaks up. But he comes up with a counter-proposal: why doesn't she just date him instead? In love, there are no save points.

Wotaku ni Koi wa Muzukashii is a web manga that was released on the author's pixiv account from April 17, 2014 to February 24, 201... More...
Narumi Momose has had it rough: every boyfriend she's had dumped her once they found out she was an otaku, so she's gone to great lengths to hide it. When a chance meeting at her new job with childhood friend, fellow otaku, and now coworker Hirotaka Nifuji almost gets her secret outed at work, she comes up with a plan to make sure he never speaks up. But he comes up with a counter-proposal: why doesn't she just date him instead? In love, there are no save points. 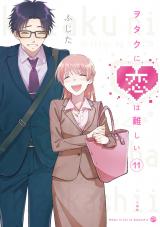 Note: You must be logged in to update information on this page.
Forum Posts Click to view the forum
Otaku ni Koi wa Muzukashii Gets TV Anime on Noitamina
over 5 years ago
PLEASE DO NOT SCANLATE/TRANSLATE!
over 7 years ago

Love Is Hard for Otaku. Or Writing Love For The Main Couple Is Hard?
by calmbreez
June 8th, 2022, 4:36am
Rating: 6.5  / 10.0
I know this is a realistic portrayal of adults interacting with each other. And I was enjoying this so much until I got further into the story and realized the author chose to make the main couples progress stagnant compared to the other 2 couples. Also, what was the point of making the female MC dry in terms of affection opposed to the male MC who’s feelings are transparent for her? This makes everyone wonder if she seriously even likes the MC or she’s just convinced herself to settle for someone who she doesn’t really love.

Why are there people making excuses for her and the lack of progress for the main couples in a MANGA that’s about them and their romance? It’s a smokescreen because it’s actually about the side couples progress while the main couple are just a couple of buddies.. and that’s fine. But where is the development😕?

Out of 82 chapters. I can count the chapters that only focused on the main couples romance on ONE HAND.

I feel cheated. Because every time I sat down to read this. It’s like I order a delicious burger with 2 sides. And I’m forced to enjoy the side dishes which are the side couples and their progress because when I try to dig in to the main dish...it has a thin layered piece of meat between the buns that I have to savor because god knows when I’ll get to bite into more...

This would’ve been in my top 10 if they progressed properly. Because I enjoyed the shit out of everything else. Oh well.
Was this comment useful?  Yes

Too much focus on side couple
by CCheshire
April 3rd, 2022, 5:13pm
Rating: N/A
The first few chapters were entertaining and I even watched the anime series but it rapidly became dull since it focused on her friend and her BF who ended up being extremely dramatic and tsundere couple antics. The downside ofc I liked almost any other pairing than them since so much of their relationship is just miscommunication and fighting. I read until the wedding scene and then I just gave up since it immediately started a new subplot and I lost interest completely.
Was this comment useful?  Yes

pretty, good
by godfrey
August 9th, 2021, 8:28pm
Rating: 6.0  / 10.0
maybe not as intensely otaku as the title would have one believe. an embarrassing lack of non-mainstream "nerd" content. should have been significantly more gay. still, funny references and sensible chuckles all around. I've dropped it a long while back but will probably come back to read it through now that it's over. maybe they put more lgbtq in after i left it.

I feel educated and blessed
by Lucassio
July 1st, 2021, 12:12pm
Rating: N/A
I thought I was decently aware of Otaku Culture, but Wotakoi piles reference upon reference with each chapter. It gives me great pride to know the references beforehand and even if I don't, that just means new learning! It's a very lighthearted read that feels like a love letter to Otaku culture as a whole. I'm not a fujoshi and I don't know how accurate a depiction fujoshis get in this manga, but I'm not bothered (as a fudanshi xD). Kou and Naoya are very wholesome individuals and I love every panel of them I get to see!
Was this comment useful?  Yes

3 good volumes, then many filler chapters
by Mytskine
August 8th, 2018, 2:04pm
Rating: N/A
After reading chapter 29, I've dropped this series. Of the last chapters I've read, about one third is focused on the main characters in normal settings, and two thirds are about side-characters, flashbacks about the MC's child days, etc.

The first volumes were a pleasant light read, even for readers that are not gamers nor hardcore otaku. Unfortunately — it-s a recurring pattern — the mangaka didn't have enough matter to cope with the publication rythm, so the manga gradually gets tasteless.
Was this comment useful?  Yes

Surprised
by Himeowchama
March 16th, 2017, 7:43am
Rating: N/A
If this is the only manga in the list by Fujita-sensei, then this has a high chance of her first release. And if this really is, then this is pretty good. Otakus can really relate~
And I'm quite jealous of the mcs bc they have each other

( meanwhile in my town, mangas and anime merch are limited (if not, completely null at all) and the otakus here are...well. Let's just say that we can't express our otaku selves to the fullest —_—
Was this comment useful?  Yes

gamers can highly relate...
by nikki-neko
May 4th, 2016, 11:48am
Rating: N/A
oh god, I laughed my ass off in that one chapter with a pokemon hint in it, complete with the battle menu. didn't expect it to be really funny, since the art is straightforward but beautiful. the plot is pretty simple, kinda like an everyday occurrence, with the exception of adult otakus in the corporate world. With the current releases, so far none, of them feature any major disputes or drama of some kind. Light-hearted, rom-com for otaku and gamers alike, when you're not glued to your game console or burning your eyes on TV watching anime...*_*

#relatable (i mean it's not epic but I laughed and smiled and awwed a lot)
by eternalight
April 9th, 2016, 9:22pm
Rating: 10.0  / 10.0
Childhood friends who grew up playing video games/watching anime and never grew out of it, romantic undertones that aren't completely shoujo genre because the boob jokes are friendly and hilarious, this manga was just what I needed to read to feel like not such a complete dimwit after all for still being obsessed with these things. The very real insecurity of being an "otaku" or gamer/anime lover is touched upon and acknowledged pretty well here and the art is just at an ideal spot (not too moe but not too shounen and not at all without flow and pretty color choices). It's cool this started on pixiv because Fujita could easily be said to be a much cooler better-at-drawing Sarah Anderson equivalent.

I definitely recommend this to fellow adults who'd enjoy reading a manga about childhood friends ~finally dating~ when they aren't each other's trope-type. There is much fun to be had reading this. I had fun and want more!