Login to add items to your list, keep track of your progress, and rate series!
Description
In a world split between the Inside and the Outside, those living in both realms are told never to cross over to the other side, lest they be cursed. A young girl named Shiva lives on the other side, in a vacant village with a demonic guardian known only as “Teacher.” Although the two are forbidden to touch, they seem to share a bond that transcends their disparate appearances. But when Shiva leaves Teacher's care to seek out her grandmother, the secret behind her mysterious living arrangement comes to light. 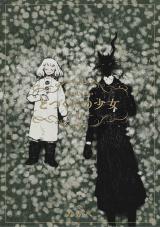 like a good book
by ninakun
September 25th, 2022, 2:02pm
Rating: 10.0  / 10.0
I finished this manga feeling like I had just read a book. A memory, perhaps, in the first person -- the teacher. The mangaka is amazing and knows how to convey feeling, mood and style in their drawings, it's really sweet. Great photography, almost like a movie. There is an innocence about the story, a loveliness about the characters, and a haziness of mystery on the myth of the world. All in all, for the artfulness of it, for successfully drawing and holding my attention, and for rewarding me for it, I can't rate it less than 10/10.
Was this comment useful?  Yes

A hidden gem
by robert9o9
July 16th, 2021, 11:32pm
Rating: N/A
This manga is not for everyone. The story advances slowly. The art, characters,story everything is very good. I don't know why this manga is not popular. If you want to enjoy a sad,thrilling,peaceful manga with great art & also wholesome moments. Read this one <3
Was this comment useful?  Yes

Very interesting
by solitarygray
June 15th, 2019, 10:15am
Rating: 8.6  / 10.0
I found the first chapter okayish, and wouldn't have continued had it not been for a manga challenge.. but now after reading upto volume 5, I'm glad that i didn't drop this.
Was this comment useful?  Yes

Incredibly Beautiful
by drawplay
December 24th, 2018, 1:30am
Rating: N/A
The story moves slowly, but is very well written and the artwork is beautiful. It's a bit like a dark fairytale and the story slowly unravels as you learn more about the world and it's characters. The relationship between the two main characters is similar to that of a father and daughter. The overall tone is a bit serious, but there is still humor and innocence from the main character who is a child. Overall I definitely recommend. The only con I would say is that it's incomplete and I wish I could finish it right away!
Was this comment useful?  Yes

Outstanding
by elmo182
December 10th, 2017, 7:11pm
Rating: N/A
I have never read anything that has had me instantly adsorbed in to the world so fast. The story is ....hard to explain and it seems a bit all over the place, but not in a bad way. like its been planned to be like this. The art style i think is its strongest feature while a lot complain because of how dark everything is because of the over use of black it can be hard to see the features of teacher but i personally think this is what adds so much to everthing.
Its short only 20 chapters at the time of this post and it was incredible
Was this comment useful?  Yes

Black and White (7 ch.)
by SaLaHaDiN_PL
June 4th, 2016, 12:46pm
Rating: 8.0  / 10.0
Totsukuni no Shoujo is like dark Mahou Tsukai no Yome .There is no romance , only something similar to fatherly love between characters . Interesting world that holds mystery of curse . I give it 8/10 .
Was this comment useful?  Yes