Login to add items to your list, keep track of your progress, and rate series!
Description
Sakurai Tomoki is a normal student whose motto is "normal is the best". If there is one thing abnormal, it is that he often dreams of a girl whose face he cannot even remember, and when he wakes up from that dream, he would always be crying. He tried leaving it as just a dream... but one day, from the sky, an angel descended. 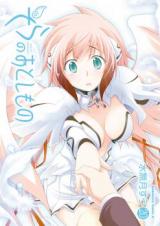 Ending was weak but surprisingly enjoyable otherwise
by Shellshock
June 18th, 2020, 10:51am
Rating: 7.0  / 10.0
So i finally finished the 20 volumes unique manga that is Sora no otoshimono or heaven's lost property. There is alot too unwind here. The story starts pretty normally as a random angel/android angeloid falls onto the hero and starts calling him master. And then more and more hijinks and harem members join in. The violent Tsundere Childhood friend, Jailbait, Best girl and finally Attack on the breasts. Now what i liked the series is surprisingly what the series at the beginning wasn't really about. Which was the story. Now I do have a problem with the emotional impact this series however i think this balances out with the fantastic art that the author produces which gives some of the most gorgeous Double pages i've seen in a while. Now What i didn't like about the series is pretty simple, the Full blown gag chapters, Now don't get me wrong some of them were downright hillarious. But most of them went on for too long especially in the 8-13 volume. They just weren't as funny. However chapters that threw a bit of the story in it. The comedy added in those parts were pretty funny because they added the much needed levity at those times. The characters however i believe really carried this series. The author did what i didn't think was all that possible. Make the violent tsundere likeable. The thing here is that the MC is perverted. Which means he gets smacked he deserves it. And those moments were actually funny. I was surprised i enjoyed the stupid slapstick comedy that i detest. But there are some chapters were are our MC gets smacked for something he didn't deserve but at the same time sometimes he legitimately gets away with but neither of those times are actually that good. With the violent smack and the perverted MC the duo actually evens out making them seem equals which was definitely nice to see.
Now with the story it becomes somewhat of an issue i liked the story i really did however the ending though not rushed that much i did feel everything was ok all shonen style. However it didn't really have the execution that other series do. Making a somewhat medicore ending. I also didn't like the fact they kept the romantic aspect open ended. Well at least i wished there was more of it. Now the story does go ham especially in the last couple of volumes. and again like i said combined with the author insane levels of imagery I think this manga did a surprisingly good job of a hyped up finale. Just the medicore ending was disappointing. I also wished some of the side plots got more of an explanation or the author explained the MC's parents a bit more. But overall i think the series was good and besides the ending there was no complete dip in the series. However several small dips do add together. I also straight up didn't like some of the jokes but again somewhat minor issue on the whole thing. Also during the fight scenes it was good. It wasn't like lvl 69 armor breast, panty shot. It was strong and hyped as hell. Most of the characters were adorable as well. Actually i think everyone in the harem was adorable. Ikaros especially. Overall i wished the manga gave more info on the side plot of the side characters, The ending itself should've been more aggressive. and the comedy should've taken a backseat at times. Poop jokes are not funny neither is the MC getting hit in the dingling after the 14th time. However the entertaining story, Adorable characters and spectacular imagery makes this manga worth reading. Its dumb fun is fun but its serious fun is way better. I thought it would be more similar to Plunderer but if anything the author could learn from his previous series rather than his new one. 7/10 Definitely worth checking out
Was this comment useful?  Yes

Hilarious and tragic.
by CriminallySane
May 6th, 2019, 6:49pm
Rating: 9.0  / 10.0
For all of its humor, this series gets extremely dark. And it ends on a literal ex machina. But what I really like about how that was executed was the way the author brought back the protagonist's first lines, and there's a nice irony in how the helpless protagonist is given his chance to right the wrongs of the people who, for most of the series, have been untouchable. Although the turn in the story was rather abrupt, it's still cohesive enough that I can follow along.

Good Ecchi Comedy with Strong Action and Decent Conclusion
by DoujinHunter
January 3rd, 2016, 12:15am
Rating: 9.0  / 10.0
Standard premise (pervert male student meets strange woman with weird powers, lewd hijinks ensue), but also with a sense of mystery to the setting which isn't always given the best development or focus in the middle sections, but pays off handsomely in the powerful ending chapters. There's a goodly number of battles in this series, depicted well and done interestingly particularly as the series nears its conclusion. Taking into consideration that, like most ecchi-comedies, the middle sections were stretched thin plotwise while the start and end are crammed chock full of plot development, the author was nonetheless able to keep things coherent and send off the manga on a great and appropriate note. I highly recommend this series for those who like ecchi-comedy, since it is good for that and has other good draws and competent execution that put this work above much of its genre.
Was this comment useful?  Yes

Terrible end. No resolution or closure. Great otherwise
by tameflame
June 11th, 2015, 7:57am
Rating: 7.5  / 10.0
A high 8 on every asoect except for the romance and the ending. The last arc was rushed and may as well not have happened at all. The ending, rather than any form of closure was just a "and things went back to the way they were, the end" ending. An utter dissapointment.
Was this comment useful?  Yes

The final is really brutal :'( but an happy ending anyway (well.. More or less...).
Was this comment useful?  Yes

great comedic ecchi manga
by whitespade
July 14th, 2014, 6:02am
Rating: 9.1  / 10.0
this is to all lovers of booby grope and panty shots - there are copious amounts of those in here. the mc is unashamed, and even revel in his pervertedness and you can see all kind of shenanigans he go up to, and make you cheer for him. of course he got beaten but its not excessive where the girl beat him up because he accidentally saw something, but because he go out of his way to see them.

i love the mc, the grandpa, judas, and the girls - there are no one im fed up with, even the usually annoying childhood friends. most of the time the story have no logic and reason to it, the mc ritually arrived near the sanzu river and the people just ignore the wings on the girl's back but all is fun so thats ok.

so 90% of the time is the mc trying to grope some girls, and the other 10% is tragic character building and plot progression. however i cannot say the personalities or the plot make much sense at all. the ending is quite abrupt and i still cant see how the [spoiler] glasses sempai can hack into the tower. is this independence day and do he use mac book or what? [spoiler]

even with all the maddening illogic and inconsistency, i do not mind, because the plot is tertiary compare to the comedy and ecchi.

Not a fantastic or perfect but still a good read overall.

One of the best ending for harem manga
by rennov
February 14th, 2014, 2:06am
Rating: N/A
This is unexpected... to create such ending with a "seems-to-be" plotless beginning... May the opinion will differ, but I prefer an epic ending, with all character spend effort to the edge, and finally achieve (or failed to achieve) the final objectives. And Sora No Otoshimono nailed it... For the review, this is my opinion:

Plot: hilarious and deep enough
Art: Great but too much ecchi
character: all is great
Ending: Hmm... one of the best...

Well, waiting for a great ending for harem manga next time...
Was this comment useful?  Yes

This is definitely in my top 5 most hilarious mangas
by SSJR2
February 13th, 2014, 5:35pm
Rating: 10.0  / 10.0
All hail Sakurai The King of Perverted male leads lol, this is a really great and hilarious series and a must read in my book (only if your cool with ecchi cause its basically based on that). im not gonna be too detailed but its just filed with a lot of funny characters that are well balanced meaning they arent just their humor, most of them are a well made charcter overall and the major plot is interesting. But i mainly want to focus on the main character. He is the most funniest character and should undoubtedly be proclaim the pervert king of all manga/anime because he is lol the stories have me rolling a lot and i just hope this lasts really long and remember this has a lot of ecchi/fanservice so if your not cool with that then just dont read it instead of bashing it for that.
Spoiler (mouse over to view)
Also later on this takes a really dark turn with main characters dying and what not but i knew it was just to make the ending memorable since it was still happy. plus lol im glad he stuck with the harem ending
Anyway im really gonna miss this series can wait for this authors next work.
Was this comment useful?  Yes