Login to add items to your list, keep track of your progress, and rate series!
Description
Mari is a shy, studious girl who has neither a boyfriend nor any friends. One day, Akiko - one of the most fashion-conscious and sociable girls in the class - strikes up a conversation with her out of the blue! As the days go by the two become inseparable, with Akiko often cheerily remarking on how they became best friends so easily. Mari has a lot of fun with Akiko and her group, slowly becoming more outgoing despite still being timid and awkward. But she knows, deep down inside, that she doesn't want them to stay just friends forever... 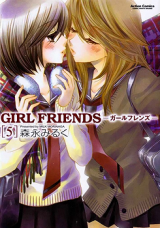 Note: You must be logged in to update information on this page.
Forum Posts Click to view the forum
Ending!
over 10 years ago
Girl Friends (by Morinaga Milk) - "volume" 4 out yet?
over 12 years ago
Its about time!
over 12 years ago

slow pace
by riko_dewayne
March 29th, 2019, 11:59pm
Rating: 8.5  / 10.0
i started yuri, or lesbianism story long a go with kissing jessica stein(a film). i never try to look again. but recently i've been catching up. what i actually looking for is the relationship development. how does it start. how do they(the character in the story) start, or realize that she or they are lesbian.
other thing i like is both girls are not too different, unlike in most yuri, in which one quite tomboy(as if taking man role) while the other one so girly(as if the taking the girl role)
the only MINUS is it's progressing so slow. if can get through you are goin to find this good

Must read
by Cacuga
January 21st, 2017, 4:21am
Rating: N/A
The only thing i think anyone can complain is that at some point the history become a little slow, but i can't tell if was the history slow or me who was in a hurry for see they togheter! You may like the plot more or less, the art, the characters, the end, etc... but no one of those factors will dissapoint you making this a overall great read, totally worth the time.
But, for me the triumph card of this manga was the realism, the author made it for you to notice how their society is about this matter and how much preassure it can do, what is even more big if you are just middle school girls with no experience, Plotrobert was right saying this manga has some situations that in real life could be solved with just a talk, that may be true in occident but you have to try and put yourself in their shoes. The whole manga is more a fight with themselves to accept those feelings than with the world itself. I even skip a night of sleep to read this manga in one shot, and this after sleep only 5 hours the previous day and work 12. (yes i have no sense at all) but i just couldn't stop read (Yes, nobody cares about my life but just to show how much the history can absorb you).

As side note, all other works i have read of this author are a good reading too, more light than this one and not that intense but still nice histories.
Was this comment useful?  Yes

Starts slow but still good
by plotrobert
April 29th, 2016, 2:01pm
Rating: 8.0  / 10.0
While I do like this manga overall, the beginning is certainly the worst part. Besides the fact that things move at a snails' pace, the story is also plagued with those little misunderstandings that would be solved in about 5 minutes in real life and characters sometimes just act stupid as hell. All that aside though, I liked the characters and the whole thing had a nice happy conclusion. Morinaga Milk always has great art and is is no exception, it's probably the best part about this story. This is a yuri classic for a reason, though it's not perfect it's still high quality.
Was this comment useful?  Yes

Re-read
by 308090b
February 13th, 2016, 8:39pm
Rating: 9.0  / 10.0
I ended up re-reading this again since I had the scans printed in the US laying around. (Private tracker) I really do love this series. It's hard to remember how much you like something after 5 and a half years. Wow 5 years and change is how long since the last chapter was scanlated. Time flies.
Was this comment useful?  Yes

great development
by whitespade
August 15th, 2014, 12:59pm
Rating: 8.6  / 10.0
as someone who love yaoi, this manga is quite new to me. i think the development of their relationship is very sweet and believable unlike all the fast paced yaoi i had read before. the way the characters interact is cute and soft, and even with endless talks about makeup and clothes i find it relaxing being lulled by the chatters of girls. all the side characters also have proper personality and its not often seeing manga with a group of girls without gossips and cat fights.

the art makes everyone look cute and soft, just what idealized innocent school girls look like. it make me root for them and really feel for them because they are too cute. there are lots of boobs showing, but there is nothing too sexual and even the sex scene just make me go aww on them. i think the light comedy is very nice too.

this manga is great for anyone who like slow romance.

Recommended read!!
by hotarusasaki
July 15th, 2013, 2:49am
Rating: 9.0  / 10.0
I don't normally read yuri/shoujo ai as I'm more of a Yaoi person but I decided to give this a shot anyway, I can defiantly say it didnt disappoint me! I've read a yuri before, not many of them but some and before and I didn't really like it thaaaat much, I mean it was alright but personally it wasn't my thing. But this manga made me change my view on the genre, it was such a loveable series and gawd it's so cute~~~~ Highly Recommended !! give it a try even if you don't normally like yuri, it's defiantly worth it!!
Was this comment useful?  Yes

Kyaaa!
by Hatesu
February 25th, 2013, 3:45pm
Rating: N/A
This manga was so cute! I thought the main story was absolutely amazing. It was really nice how the main characters relationship grows even while they to change and grow. Even the other characters were done really well with out taking away from the main characters too much, truly a perfect blend. The artwork was absolutely perfect, everything was drawn well and the full color pages at the beginning of chapters were so pretty. I just couldn't get over how damn cute the main characters were. I really don't know what else to say. Such a cute, wonderful yuri. 10 across the board ...
Was this comment useful?  Yes

Had me crying!
by MangomyTango
March 21st, 2012, 10:28pm
Rating: N/A
Although I'm not a fan of this genre, I just decided to read some light GL and GOSH! this one had me in tears at time. The build-up is so cute and emotional when it came to confession.
Was this comment useful?  Yes

Awesome
by Lowlife
January 24th, 2012, 5:57am
Rating: 10.0  / 10.0
I've read a lot of manga and the latest two years or so, I havent' really read anything worth remembering. I thought thay maybe I'd gotten tired of manga, or at least romance stories, which is what I generally prefer.

And then I read Girl Friends. And it made me remember what reading manga is all about. It's an amazing love story with a genuine feel which moved me close to tears several times. When I got close to the end I felt genuinely sad that it was going to end soon.

The art is cute and fits the story. I especially like how the relationship between the two main protagonists grows. It does not feel either dragged out or hurried, as opposed to most series I've read lately.

I sure will be looking forward to more works from Morinaga. This one sure raises the bar high.
Was this comment useful?  Yes

my first shoujo ai
by SAimNE
January 8th, 2012, 10:42pm
Rating: 10.0  / 10.0
After reading this a while back I tried more of the shoujo ai/yuri genre.... nothing could compete with it. I was hoping a majority of the titles would be similar, but they are all fanservice with no substance, Sweetness with no depth, or drama with no real sweetness....

there are very few romances I have read in any genre that match up with the pure sweetness you will find in this story. The art is quite good and really adds to the experience, and while the plot doesn't add much other than a slow yuri relationship, I think that is all this needs to be great. My only disappointment was that
Spoiler (mouse over to view)
they never came out to friends/family.... I'm happy that are apparently together during college, but I really wish the plot could have finished
. Anyway this manga is an extremely good read, but make sure to read a few romances before this so you don't set the bar too high to ever enjoy a romance manga again

.
Sweetness: 10(^///^)
Art: 9.5(looks great and adds a lot of feeling)
Character Development: 10(absolutely perfect slow romance char development)
Comedy: 9(based on the fact it isn't a comedy manga, the comedy was above average)
Ending: 9(would have liked to see more resolution)
Overall: 9.5...... ok actually I may have been too hard on the ending, and the sweet romance more than makes up for it....... wth, 10