Login to add items to your list, keep track of your progress, and rate series!
Description
Adventures of Melty and friends that attend an academy in order to become questers! 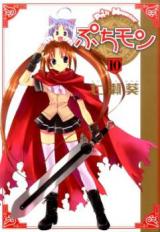 there should be more volumes or spinoff
by djizle
October 3rd, 2013, 6:13pm
Rating: N/A
this ended up being a really good series, but the ending was way rushed. even though there is was to many open holes and unfinished storyline that should be completed. so there better be a spinnoff or the publisher should license aditional volumes. if not thats just too stupid.
Was this comment useful?  Yes

Cute!
by ms_nobody
June 20th, 2011, 8:52pm
Rating: 5.0  / 10.0
It's a bit iffy in the first few volumes (cliche backstories, too many character introductions, little to no fight scenes, weak plot, ect.), but it gets a lot better.
The action scenes get better and there's romance between Melty and Raynard later on.

I love the protagonist Melty because she's almost like a male shonen lead. It's refreshing to see a female lead act like that for once.

In all, it a cute read in between updates. I really do hope this will be picked up.

I really like this
by suziah
July 8th, 2010, 4:14am
Rating: 10.0  / 10.0
I have no idea what's wrong with me but i seriously love this manga.
I do wish this manga would be completed. It would be a waste not to.
anything with cute characters are very attractive
that's my opinion anyway
Was this comment useful?  Yes

HEY
by JohnyPleaseBeGood
July 23rd, 2009, 4:30pm
Rating: N/A
Does anyone know if there is romance in this manga? I know the genre tag says romance... but i read the intro and there isn't even a boy main character

Charming
by Akukame
April 25th, 2008, 12:45am
Rating: 6.0  / 10.0
I have to agree with many of the other commenters on a lot of things. But when it comes down to it, the series doesn't really go anywhere, and obviously isn't trying to be anything too special. But that isn't necessarily a bad thing.

The series has a definite charm to it. It doesn't try to be like any other series, and just playfully makes fun of rpgs without falling into any of the cliche traps. Overall it has become a bit of a guilty pleasure for me. Although I know it won't go anywhere and I'm never going to be blown away by anything in it, it also never displeases me. I can always rely on it to be charming and cute and leave me feeling good.
Was this comment useful?  Yes

a cute read
by Cisaria
December 29th, 2007, 10:34am
Rating: N/A
when you read this story, don't expect too much. there's honestly not much of a plot in my opinion : / but the story progresses nicely and has lots of cute characters and such. its worth a read if you're in a good mood or you're bored.
Was this comment useful?  Yes

Petit Monsters
by Guilty
May 23rd, 2006, 12:21am
Rating: N/A
Don't come into this expecting Pokemon or Digimon, this is not about catching monsters, although the audience can seem the same often the whole premise is different.

The series is about a 13 year old girl going to an academy for "questors", just think of an RPG and you will basically understand everything. The series doesn't really appear to follow any specific storyline, just standalon stories that span 3 - chapters each, this isn't really a bad thing as a single storyline would have become quite tiring for this series.

The art in this series is so cute n_n it's hard not to fall in love with everything in it (well maybe not the giant snail monsters), every single frame is perfectly done, its never to busy to follow whats going on but its never to bland that it just becomes boring.

Overall you really should get onto this series now before its too far into it, its not one your gonna d/l the whole thing afters its finished, it would never be read if you did that, best just to get each chapter as it comes out XD
Was this comment useful?  Yes