Login to add items to your list, keep track of your progress, and rate series!
Description
In the medieval fantasy world of Alfheimr, succubus princess Astarotte Ygvar--the first princess of the kingdom of Ygvar--has just reached the age of 10. In the coming years, it is necessary for succubi to obtain a male harem. To maintain their appearance, they must consume a substance only found on males called "Sauzfryma", better known as semen.
The princess, however, detests males and will only agree to create a harem if a human male joins. 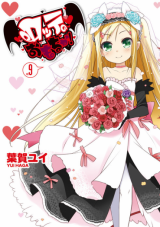 Was alright until freefall
by satsujinken
July 15th, 2016, 1:19am
Rating: N/A
Spoiler (mouse over to view)
I agree with AlmightyJu, I had put this on hold for like 3 years and decided to finish the last 25 chapters just now. First things first, I'm not into 10 yo looking lolis. It was alright until around chap 40s where it appeared to be a harem then shitstormed. The fact that the guy had shown a kind of paternal love for the main girl that looks 9-10 yo was ok for me and they introduced a bunch of girls that ended up having feelings for the guy, which is a good thing since I enjoy reading harem but then in the last few chapters or so it takes a 180 turn and all the girls that clearly had a crush on him suddenly disappear/lose interest and he turns into a completely different character and is more or less forced to go the one girl route with the 10 yo looking loli whom he had acted like a father to for pretty much the whole manga. No Harem ending, really rushed the final chapters and kinda seems like the artist is just a closet pedo. The art is indeed good though also I didn't bother adding a spoiler tag because this series is old so deal with it
Was this comment useful?  Yes

There's bad manga then there's this
by AlmightyJu
November 28th, 2015, 6:46am
Rating: 3.0  / 10.0
If you want to read a manga with little to no character progression, little plot development (the plot that is there is forced) and nothing that makes you want to keep reading but it has lolis then this is for you!

There is nothing harem about this at all despite the succubus "need" for a harem, had to force myself to finish it, don't see why people like it :s

Rating a 3 purely because I thought it was well drawn.
Was this comment useful?  Yes

Well for one, the boy is the princess's step-father. The boy already has a (human?) daughter and she is the princess's secret bastard half-sister. Oh and if the succubus princess doesn't hurry up and grow up (mentally), she could die from a "nutritional" deficiency when her body physically grows up. All this takes place amid harem-style shenanigans with other girls.
Was this comment useful?  Yes

not bad
by Banarok
June 8th, 2011, 5:42pm
Rating: 7.0  / 10.0
to be honest my expectations of this manga hit rock bottom and the continued for a few miles downwards so this manga could impossibly disappoint me.

but all in all
its easy to read and the jokes are dirty 95% of the time, if you can stand the fact the protagonist is the object of affection of a 10-year old and loli-themed-echii then it's not bad at all.
Was this comment useful?  Yes

Its crazy
by FormX
May 15th, 2011, 10:15pm
Rating: N/A
if it wasn't a seinen comedy.
the manga is better than the anime (obviously original is better), but one thing that the anime does better is that it doesn't foreshadow it as much as the manga. the manga shows more ecchi stuff featuring loli tho.

seriously if this was some drama instead
Spoiler (highlight to view)
everyone would hate the mom/queen. at least i would. Naoya's life just got screwed over: he basically got taken advantage by her when he was at the age of 13, and she got pregnant. then the girl left and had a harem w/ 3000 other men. then she leaves him a toddler child to take care of.

but it is a seinen comedy, so it'll be interesting to see what happens.

succubus
by reivatin
February 4th, 2011, 3:18am
Rating: N/A
Spoiler (highlight to view)
epic, he have child with his mother, and now he is wooing the child of women that have his child ?
well pretty confusing word isn't it

Strange, yet funny
by enaikelt
January 24th, 2011, 12:21am
Rating: N/A
It's just strange. xD But it's hilarious! I can't decide if it's bordering on loli or not, really. The two main female characters are both children, and there are somehow the most dirty jokes... and yet not, at the same time. How bewildering.
Was this comment useful?  Yes

New Twist
by shadowvagrant
August 26th, 2009, 4:43pm
Rating: 10.0  / 10.0
This is a first for Ecchi comedy the main male is the first and only member of a harem of a princess who doesn't like men. I look forward to seeing how it develops from here on out.
Was this comment useful?  Yes